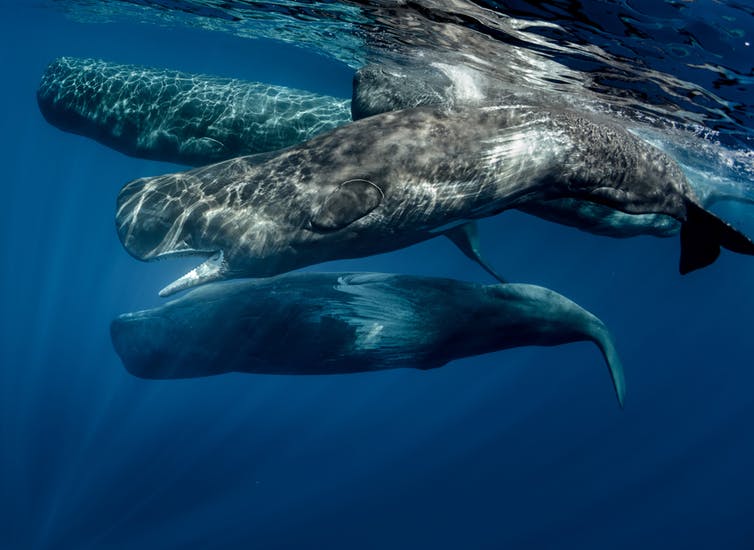 We often think of culture as solely human. We think of our music, our clothes, our food, our languages. However, culture stretches far beyond Homo sapiens. As evidence of the existence of culture in other animal groups emerges (from insects, rats, fish to land mammals, primates and dolphins), humans need to rethink what it means to have culture. We must accept that what we have long considered our own might be shared.

This is especially important because culture can have important implications for conservation. Understanding an animal’s culture might be the only way to save them.

As a PhD candidate studying culture in a non-human species, the sperm whale, I have had the chance to witness its implications. The more time I spend with whales and learning from them, the more I am convinced that acknowledging their culture is necessary to understand and protect them.

While most people have a general idea of what culture is, defining it can prove difficult. Culture is pervasive and, at the same time, it can express itself in such small, almost non-perceptible ways. Biology defines culture as shared information (or behaviour) that you acquire socially from your peers.

The importance of culture has long been recognized in humans. It is how we successfully inhabited all the biomes of our planet. Culture dictates our social interactions; the spontaneity of fashion and music; the laws that govern our societies and civilizations; the causes of our wars; the reason why, right now, you are reading this article instead of foraging in the forest.

Culture shapes every aspect of our lives and has allowed us to become the dominant species we are today. However, although humans might be the most cultural species, they are not the only cultural species.

And this is only the very tip of the iceberg. Every year, more evidence emerges on to the presence of culture in animals.

The culture of whales

Beyond primates, the animal group for which we have the most evidence of culture are the cetaceans (whales and dolphins). Among them, the sperm whale has received particular attention.

Like us, sperm whales have families, they have strong affiliations with a few individuals and they are extremely social. Such a social environment is the perfect substrate for culture.

Sperm whales are matrilineal, which means that females stay with their mothers, forming groups called social units. These social units are comprised of one or two families and are stable over their entire lives. They travel together, socialize together, forage together and learn from each other. Beyond social units, sperm whale societies are also organized at a higher tier called vocal clans. Vocal clans include thousands of individuals and can be recognized acoustically.

The most exciting part, however, is that individuals from different vocal clans not only have extremely different repertoires but also do not associate with each other, even if they live in the same environment. For example, in the Eastern Caribbean where I study sperm whales, we know about two vocal clans: EC1 and EC2. These two vocal clans have been identified in the same area (around the island of Dominica) but have never been seen interacting with each other: not even once in the 15 years the Dominica Sperm Whale Project has been studying the population.

In contrast, social units that belong to the same vocal clans are regularly observed foraging and socializing together.

Why is that? They live in the same environment, so surely, these differences are not the result of geographic adaptations. Could it be genetics? The evidence says otherwise: genetics can’t explain the variation in vocal repertoire. The only remaining explanation is culture. Perhaps whales actively choose to avoid whales from different vocal clans. They learn a specific vocal repertoire from their mothers and then only associate with individuals that share that same repertoire.

Culture has important implications for conservation. If a population is subdivided into cultural groups, then conservation efforts targeting only one group will lead to a loss of diversity.

If cultural knowledge is mostly obtained from older matriarchs, then protecting these individuals at all costs should be our priority. If species are able to learn socially, they might respond differently to anthropogenic stressors. And yet, we seldom hear about it.

Acknowledging the presence of culture in other species would go against our anthropocentric view of the world: a world where humans are at the “end” of the evolutionary tree, smarter, more advanced and more important than other species.

It would blur the line between “us” and “them.” Once this occurs, how could we justify putting these cultural beings in cages, treating them as legal “property” and destroying their habitats? Perhaps it is time to re-think culture and acknowledge that other species might share what we long considered our own.