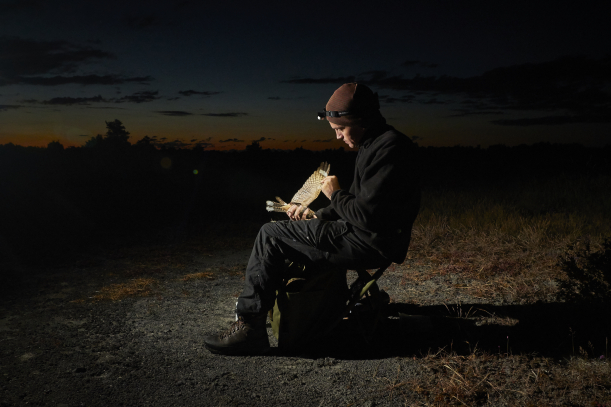 A new study from Lund University in Sweden shows that the presence or absence of moonlight has a considerable bearing on when migratory birds take flight in the autumn.

Together with colleagues at the Department of Biology at Lund University, Gabriel Norevik studied European nightjars (Caprimulgus europaeus) and how the lunar cycle and moonlight affect the departure time when the birds start their three-month-long migration to areas south of the Sahara.

Using miniature data loggers, the researchers charted the activity of 39 European nightjars over a one-year period. The results show that the birds are more than twice as active in their hunt for insects during moonlit nights compared with when it is dark. The study also shows that the birds begin their autumn migration south about ten days after the full moon, and that the individuals synchronise the migration and fly off more or less at the same time.

“It surprised us that the lunar cycle and the time the birds spent on hunting insects co-vary so well. This in turn affects their migration pattern in such a way that they synchronise their flight so that practically all of them fly off at the same time ten days after the full moon,” says Gabriel Norevik.

European nightjars use their sight when they hunt at night. In the moonlight they find it easier to catch flying insects and replenish their energy reserves.

The birds migrate in three stages from Sweden and northern Europe to wintering sites south of the Sahara. Each stage follows the same pattern: when the moon provides a lot of light it more than doubles the time that the birds hunt insects, and the next stage of the migration starts ten days after the full moon.

“We will go on to examine that and what effects this type of synchronised migration has on the birds themselves and their surroundings”, says Gabriel Norevik.

Publication: The lunar cycle drives migration of a nocturnal bird