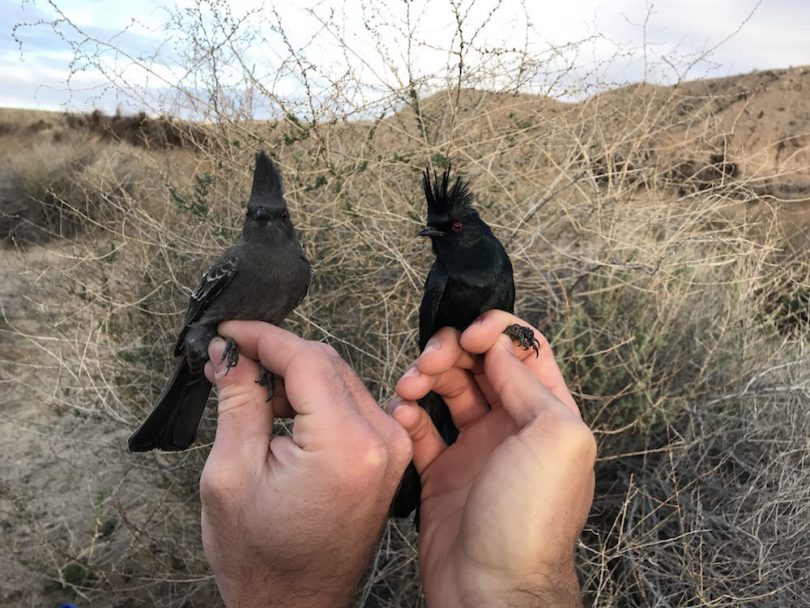 Reproduction and migration are the two most demanding tasks in a bird’s life, and the vast majority of species separate them into different times of the year. Only two bird species have been shown to undertake what scientists call “itinerant breeding”: nesting in one area, migrating to another region, and nesting again there within the same year, to take advantage of shifting food resources. New research just published in The Auk: Ornithological Advances provides strong evidence that a third bird species takes on this unusual challenge—the Phainopepla, a unique bird found in the southwestern U.S. and the northernmost member of an otherwise tropical family.

Scientists had known for years that some Phainopeplas breed in the desert in spring, where they feed on desert mistletoe berries, and others breed in woodlands in the summer, where a wider range of foods are available—but could these actually be the same birds? To find out, Princeton University’s Daniel Baldassarre, now an Assistant Professor at SUNY Oswego, and his colleagues captured 24 adult Phainopeplas breeding in the Mojave Desert in March and April 2017 and fitted them with tiny GPS tags. To download the GPS data and see where they went, they had to recapture the same birds. Fortunately, five of the 24 birds returned to the same site that fall, and all five tagged birds had migrated to coastal woodland habitats and back in the intervening months—exactly where and when the itinerant breeding hypothesis predicted.

“Seeing the GPS tracks for the first time was amazing, but the biggest thrill for me was re-sighting the first tagged bird that returned to the capture site,” says Baldassarre. “We were a bit unsure how likely they were to come back to the same spot, so to see that a tagged bird had returned was an exhilarating moment. When he hit the net it was like, okay, we’re in business here.”

Circumstantial evidence has long raised suspicions that Phainopeplas might be itinerant breeders. Phainopeplas are vocal mimics, and birdwatchers had observed individual birds in desert habitats mimicking species found in woodland habitats and vice versa. The GPS data from this study still doesn’t completely prove that Phainopeplas are itinerant breeders, because the researchers were not able to directly observe any tagged birds nesting in coastal woodlands. However, Baldassarre and his colleagues were able to further support their conclusions with DNA analysis showing that desert breeders and woodland breeders are not genetically different.

“I approached this just thinking about it being a cool species and a rare behaviour, but as I started to consider the bigger picture, I realised that the sort of flexibility that itinerant breeding species like this seem to be capable of is also interesting from a climate change perspective,” says Baldassarre. “It suggests that they might be able to deal with climate change better than other birds. They’re highly mobile, they can modulate their physiology to go between migratory and breeding periods quickly, and they can deal with different physical and social environments. It makes this interesting beyond just being a weird bird behaviour.”

GPS tracking and population genomics suggest itinerant breeding across drastically different habitats in the Phainopepla is available at https://academic.oup.com/auk/article-lookup/doi/10.1093/auk/ukz058.

About the journal: The Auk: Ornithological Advances is a peer-reviewed, international journal of ornithology published by the American Ornithological Society. The Auk commenced publication in 1884 and in 2009 was honoured as one of the 100 most influential journals of biology and medicine over the past 100 years.