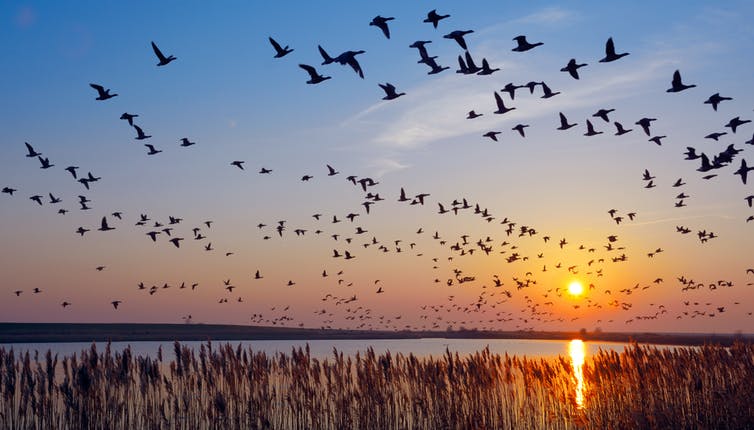 But for many species, population growth in new places does not keep up with the decline elsewhere. For some species, such as polar bears, such benign places do not even exist. And even if they do, species still face a significant problem: they need to find them.

This problem is perhaps more serious for migratory animals, which have to adjust to not one, but several changing environments that they visit throughout the year. Even after finding a new habitat one year, they must find it again the next, and every year after that. How on earth do these creatures know where to go?

This question is not trivial: many migratory populations are declining. What seems to be killing them is their inability to adjust to multiple changing habitats at once. The problem might be that it is hard for them to learn new migratory habits.

But a few migratory species are thriving. Among them are barnacle geese, a small-sized goose that winters in Europe and traditionally breeds on the Arctic tundras of Siberia, Svalbard and Greenland. So, how are they doing so well?

We barely know the exact routes of many migratory species, let alone how these have changed over time. But here, barnacle geese are the exception. Ever since their near extinction in the 1950s, when fewer than 500 geese were left, scientists have been monitoring their numbers. The geese were observed in their wintering area at the Solway Firth, between Scotland and England, all along the Norwegian coast during spring migration and up to Svalbard.

Each spring from the 1970s onwards, researchers went to Helgeland on Norway’s west coast to observe the geese arriving from the UK to fill their bellies on grass. These fat reserves are essential to complete the second part of their journey north to Svalbard, where they breed.

From the 2000s onwards, goose observers at the traditional feeding site in Helgeland started to see numbers go down. Currently, the majority of the whole population (now 40,000 birds strong) stops off in Vesterålen.

Rapid adjustments? Certainly. The number of geese in Vesterålen in spring has actually grown faster than can be explained by the birth rate alone, meaning that what we’re seeing is not just “the survival of the fittest”. In addition, many individual geese must have switched to feeding in Vesterålen later in life.

Along with counting geese, international research groups have been catching geese in the breeding areas on Svalbard since the 1960s, fitting juvenile geese with plastic leg rings with letter codes. This allowed goose observers along the Norwegian coast to actually know which bird they were looking at, and even how old it was.

Since 2000, these observers have gathered enough observations of ringed barnacle geese each year to allow proper calculations. This has enabled us to show that geese are indeed switching to Vesterålen in big numbers. In addition, the probability for individual geese to move to Vesterålen has been increasing, and young birds are far more likely to switch than older ones.

So are these changes a response to climate change? We analysed the grass growth during the feeding period at both locations, which we could estimate from daily temperature and sunshine levels. The start of grass growth in spring has advanced more than three weeks since the 1970s, leading to a strong increase in grass availability during the goose staging period in spring at both locations. But availability is not all that counts.

Barnacle geese arrive in Norway at the end of April. In the 1970s, the snow usually had just melted at that time, and the first grass shoots were coming up. In recent years, the grass was already long when the geese arrived, and contained more cellulose. This is much more difficult for geese to digest than young grass, resulting in a lower rate of fat storage.

Vesterålen is further north, and spring starts much later than in Helgeland. This means that due to climate warming, the annual timing of grass growth in Vesterålen now is how it used to be in Helgeland. Fresh new grass now is just emerging in Vesterålen when the geese arrive, enabling the geese to gain weight fast. So yes, the switch makes sense.

Does that mean that the geese know that the new place is better? Not necessarily. Most of the switchers are young birds, which do not have much experience. Instead, we think that they follow experienced birds to Vesterålen, perhaps after they have arrived in Helgeland to find there is not enough food to go around. Geese operate in families, staying close to their long-term partners and relatives. They might exchange more information than we know.

It’s the group travelling that does the trick for geese, allowing them to profit from the discoveries of others. The question that remains is why other bird species have not evolved in the same way. Perhaps geese have always lived in a more dynamic environment than other migratory species.

Think of shorebirds, which have been dependent on the same shorelines and inter-tidal areas for thousands of years. For them, the current rate of climate change might be something they have not evolved to deal with. Perhaps we are creating a world in which all birds would be better off acting like geese.