Home » How fires weaken Amazon rainforests’ ability to bounce back 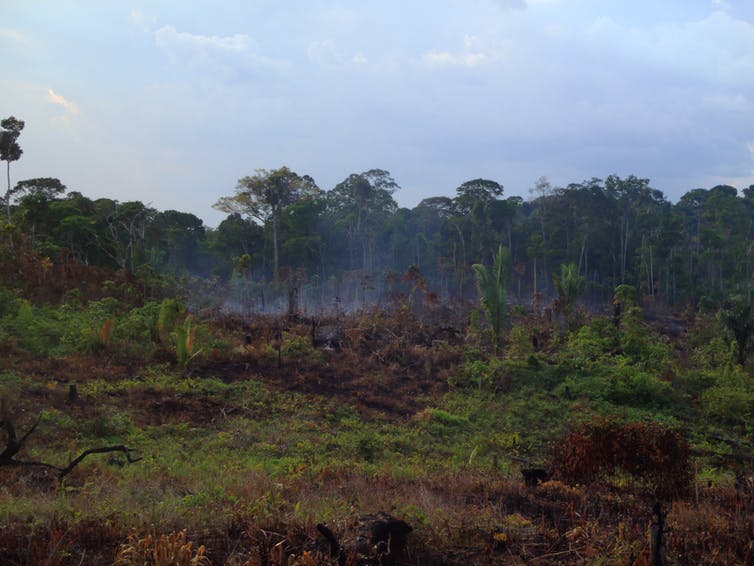 The flames consuming the Amazon rainforest this year have alarmed the world, renewing concerns about one of the planet’s most biodiverse regions and the release of large amounts of carbon into the atmosphere. But there’s another concern that’s been largely overlooked – the eroding capacity of Amazonian ecosystems to recover from repeated burning over the years.

The fires across the Amazon rainforest are due exclusively to human activities. Ranchers, farmers and land grabbers use fire to clear land or renew pastures for ranching, while indigenous and local groups often use it to fertilize and clear fields for traditional agriculture.

Some of these cleared areas are later abandoned and left to regrow – a potentially hopeful twist in the story. But the new forests don’t always simply pick up where the original ones left off. More than 20 years of study at Brazil’s Instituto Nacional de Pesquisas da Amazônia, which we have contributed to, has shown that repeated use of fires to manage land results in forests that grow slowly and lose the capacity to restore biodiversity and store carbon.

Secondary forests, or forests that return after being cleared, today total 2.4 million square kilometers in Latin America. This regrowth stems from migration from rural areas to cities, intensification of agriculture, and the abandonment of marginal lands among other reasons.

The return of trees is good news in a region where primary tropical forests are quickly being destroyed, because the returning forests can have significant local and global ecological benefits.

In only 20 years they can harbour some 80% of the tree species found in surrounding mature forests, helping restore biodiversity. They can also sequester massive amounts of carbon. In addition, secondary forests provide a natural corridor for animals living in increasingly fragmented rural landscapes.

These secondary forests also protect and restore soils, replenish watersheds, and benefit people whose livelihoods depend on them for food, wood and other goods.

So it’s not surprising that letting forests regrow has gained traction as a low-cost and effective way to restore ecosystems and help curb climate change. But those potential benefits are hardly universal, as our research has shown.

The persistent impact of fires in forest recovery

Across different sites in the Central Amazon, we have studied how forests regrow spontaneously in lands abandoned after different land uses and fire histories.

One typical example of such use is cattle ranching on former forest land. After an initial clearing by cutting and burning, ranchers usually use fire every one to two years to remove weeds and renew the grass. Another is shifting cultivation, in which millions of Amazonians use alternating cycles of cutting, burning, cultivation and regrowth to produce local staples.

As part of a long-term experiment, we annually monitored the process by which trees arrive, become established, grow and die after intact forests were cleared near the city of Manaus, Brazil. We and our collaborators found that two to eight years of pasture management with annual burning resulted in forest stands markedly distinct from those thriving in areas left alone soon after being cut.

Trees arrive and grow relatively quickly in both areas, and satellites can detect their crowns within three to five years. But the images from the sky do not distinguish the poor on-the-ground quality of secondary forests in areas that are repeatedly burned. Once forests begin to grow back, these areas are dominated by just a few species that exhibit an unusual resistance to fire and a high capacity to sprout.

Stands of secondary forests regaining areas with distinct land use and fire history after five years since abandonment near the town of Tefé, Brazil. On the left, a closed understory with a richer community of trees regenerating in areas exposed to only one burning contrasts with an open understory and an impoverished forest stand dominated by one tree species over a field burned five times, on the right. (Photos: Catarina Jakovac)

Recurrent burnings eliminate tree seeds from the soil, and new species dispersed from surrounding forests arrive at an extremely slow pace. The result is that after two decades, forests growing in fire-managed former pasturelands shelter some 50% fewer tree species than in secondary forests reclaiming areas not damaged by fire, the research shows.

The rate with which carbon is accumulated through plant growth also falls after each fire event; after five burnings, the rate of biomass recovery reduces 50%.

The results we found in our research sites around Manaus have also been seen in new studies carried out in non-experimental settings. In Apuí, an area in southern Amazonia suffering a high rate of recent deforestation and fire events, years of cattle ranching and repeated burning have compromised the ability of secondary forests to thrive spontaneously in abandoned fields.

We have seen a similar pattern in once-traditional cultivation systems as socio-economic changes have pushed these systems over their carrying capacity. In the region of Tefé toward western Amazonia, the more times one field is cultivated and the shorter the fallow period between burnings, the more slowly secondary forests grow and the more they harbor a community of plants characterized by woody vines and trees similar to those found in abandoned cattle pasture.

This intensification of that traditional agricultural system is also reducing productivity by 30-50% and disrupting the sustainability of those landscapes. And each new cycle of slash-and-burn decreases the amount of carbon these forests sequester by 10%.

These studies show that the impact of fire on forest regeneration and ecosystem recovery is not mitigated by natural processes for at least several decades. Depending on the frequency of burning events, the return of biodiversity and carbon stocks can be extremely slow or possibly never happen, even in areas bordering otherwise highly forested landscapes.

Brazil has committed to restore 120,000 square kilometers of degraded lands by 2030 as part of a global effort to recover these areas. But our work suggests that the goal of sequestering more than 1 gigaton of CO2 and generating some $4 billion in economic benefits, as envisioned by Brazil’s targets, can only be realized in nondegraded land, or areas not burned regularly.

Secondary forests recovering deforested areas in the Brazilian Amazon as of 2014. Some 170,000 sq. km – an area the size of Florida – is re-greening abandoned lands. But half of the secondary forests are recovering former pastures. (Source: TerraClass)

Roughly one-third of the secondary forests in the Amazon are growing over abandoned pasture and agricultural lands. But the pervasive use of fire and fallow periods of less than five years hinder the natural trajectory of forest succession in those areas. Once abandoned, these impoverished forest landscapes become trapped in a steady state that may persist for decades. They grow at a slow pace, harbor a limited number of species, sequester carbon at low rates, and are of little use for local people’s livelihoods.

If the government of Brazil does want to effectively recover deforested lands, it must take active steps to help secondary forests to thrive in such contexts. Two decades of research shows government support and investments in restoration initiatives such as tree pruning, seedling plantation, soil recovery and agroforestry are required if recovering forests in the Amazon are to have any real economic or ecological value to future generations of humans and the planet.

Header image: Prescribed fires are often done to eliminate weeds and renew the grasses in pastures for ranching across the Amazon. Credit: Paulo Massoca, CC BY-SA