Home » Grizzlies show remarkable gene control before and during hibernation 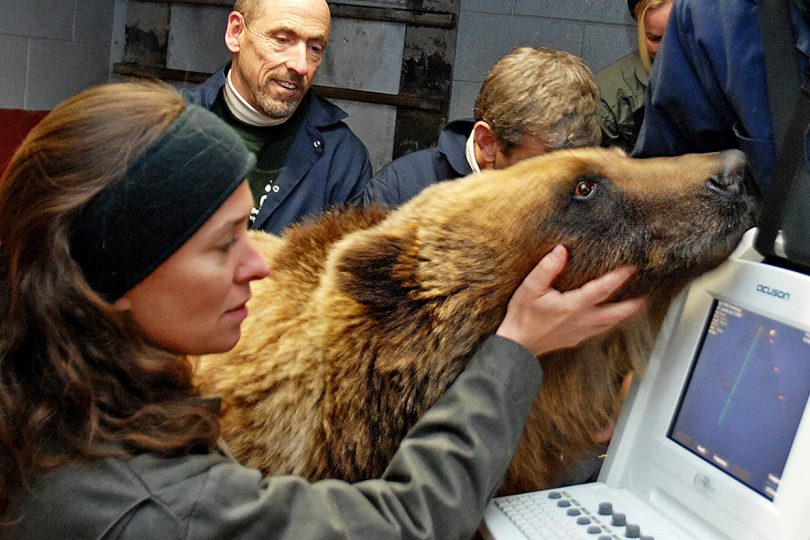 Large hibernators such as bears, however, have evolved to adapt to and reverse similar metabolic stressors they face each year before and during hibernation to essentially become immune to these ill effects.

New RNA sequencing-based genetic research conducted at Washington State University’s Bear Research, Education, and Conservation Center shows grizzlies express a larger number of genes in preparation for, and during hibernation to cope with such stressors, than do any other species studied.

The king-of-the-gene switching superlative even holds true when one corrects for the different sample sizes used in other hibernation studies.

The work was conducted in Pullman, Washington, home of the only university-based captive grizzly bear population in the world. It was published Sept. 13, in Communications Biology, a Springer Nature publication. The WSU scientists biopsied muscle, liver, and fat tissues for the study.

It begins with the wonders of hibernation

For centuries, people have been fascinated with various species known to hibernate.  Science fiction writers describe fantastic space journeys and hibernation states employed with humans. Medically-induced comas in humans get them past extraordinary traumatic or disease states, organs are cooled for storage and transport, and scientists continue to wonder if hibernation could be induced as a therapeutic tool. A wide variety of species have been studied, including those that ‘hibernate’ in the warmer months and ones that hibernate in winter and whose body temperature can sometimes drop to near freezing. But not bears. Bears appear to be more like humans.

Unlike what some assume is a sleep equivalent, hibernation is a very specialised metabolic state that varies by species and the environment where they hibernate.  The mechanism for hibernation in all species studied is controlled by their gene expression.

“Bears and other hibernators have sleep and wake cycles, but these differ in both the type of sleep and the frequency with which they occur,” said Professor Heiko Jansen, lead author of the paper.

With grizzlies, the observable details of hibernation are astounding. During hibernation for nearly five months, grizzlies maintain only a slightly lowered body temperature and essentially do not eat, urinate, or defecate.  They do however, give birth and produce milk and all the while they do not lose significant bone or muscle mass. In metabolic terms, during hibernation they are the ultimate recyclers of the waste products that mammals usually have to eliminate or suffer with toxicity from their buildup.

Studies done with humans show that even as little as 24 hours of fasting and confinement to a bed can lead to measureable blood glucose and chemistry changes and bone and muscle loss. Grizzlies though maintain a near normal blood glucose level throughout hibernation. By turning down their sensitivity to insulin, bears can conserve the glucose they produce.

Grizzly cardiac studies conducted previously at WSU show that during hibernation bears’ heart rates can slow down to as low as 5 beats per minute, with 12 to 15 being average, while the consistency of their blood resembles thick gravy.  Their heart saves energy by essentially confining its pumping to two of its four chambers.  Yet, startle a hibernating grizzly, and it can rev its heart up to 100 beats per minute in mere seconds.

Grizzlies have developed this unique set of adaptations in order to survive harsh winters when food is scarce. By hibernating then they expend little energy and survive, give birth, and nurse until food becomes abundant again.

While other studies in other species have looked at gene expression in tissues before and during hibernation, the work until now has never been done with grizzlies.  The WSU results while somewhat expected, far exceeded the level of differing genetic expression seen before.

Through sequencing RNAs, the team looked at hyperphagia [pronounced HY-per-fay-gee-uh] and subsequent hibernation across six bears. Hyperphagia means the period right before hibernation when bears begin eating to excess in order to store energy as fat. Bears at this time of year would be considered morbidly obese by human standards.

Among the discoveries was that all three tissues studied had dynamic gene expression changes occurring during hibernation. Perhaps more importantly, they discovered there was a subset of the same genes in all three tissues making the same changes at the same time.

Fat is the tissue that fuels hibernation and probably orchestrates the sparing of other tissues. But, despite the calorie intake and fat accumulation, bears do not suffer the same negative effects people do. Furthermore, they reverse the process by switching genes on and off based upon the season.

Fasting a bear during the active season as if it is time to hibernate does not make the same genes switch on and off like it would in late fall. Feed a bear in hibernation, and the genes can’t be fooled then either; hibernation continues.

“Many people assumed that as bears go through hyperphagia, fat just sort of accumulates and sits there as a fuel reservoir,” explained Jansen. “In fact, our studies have shown that the fatty tissue is far from inert. Fat is actually very metabolically active being driven by the expression of over 1000 unique genes in fat during hibernation as compared to the level of expression seen during the normal seasonal activities.

“What fat’s entire role is in the overall hyperphagia and hibernation process remains an exciting area to continue to explore.”

Jansen went on to explain that during the active period and subsequent hyperphagia, the genetic expression varied among the tissues studied. While many genes in fat were being differentially expressed, there were no genes being expressed like that in muscle tissue and only three were expressed differentially in liver tissue.

Differential gene expression also means genes may be up-regulated or down-regulated depending on the gene, sort of like a panel of light switches being on or off.  Of the genes expressed in fatty tissue, more than 2000 were up-regulated and about 1800 were down-regulated in hibernation compared to the active season.

“Seeing the same sets of genes in different tissues being up-regulated or down-regulated that best serves the animal at the same time suggests there may be a common control mechanism for the process making this more one of an ‘on-demand’ regulation,” Kelley said.