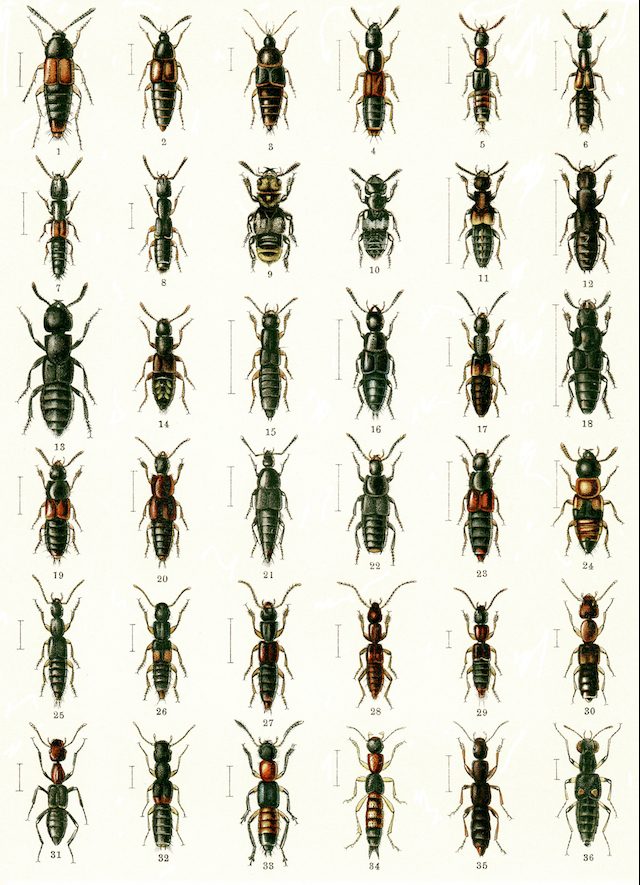 There are more different kinds of beetle than just about any other kind of animal—scientists have described about 5,800 different species of mammals, compared with nearly 400,000 species of beetles. Of those 400,000 kinds of beetles, more than 64,000 species are members of the rove beetle family, Staphylinidae. These mostly small earwig-looking insects are found all over the world, and they’ve been around since the time of the dinosaurs. But scientists are still figuring out exactly when rove beetles first evolved. A new study in Systematic Entomology suggests that the fossil beetle species believed to be the oldest rove beetle isn’t a rove beetle at all, meaning the beetle family tree needs a rewrite.

The beetle at the centre of this mix-up, about the size of Franklin D. Roosevelt’s nose on the U.S. dime, is Leehermania prorova. When the fossils of Leehermania were first discovered in the 1990s along the Virginia and North Carolina border, they were believed to be the oldest rove beetles ever discovered—by about 50 million years.

Until 2012, the only public information on the fossils was two images, published in 1996 and 2005, but no formal description. Anyone who didn’t have direct access to the fossils of the species could only make guesses about its placement in the tree of life based on those photos.

So, when a formal description of the beetle was finally published, beetle scientists around the world were excited to read it.

“When Leehermania was formally described, and more photos came out, we thought to ourselves ‘that doesn’t look quite right for a staphylinid,’” says Margaret Thayer, a scientist at the Field Museum in Chicago and one of the paper’s nine authors. It didn’t look like the rove beetles that Thayer has spent her career studying.

“I happened to be at the museum when I first read the paper, so I went and looked through the specimens in our collection to compare,” said Alfred Newton, also a Field Museum scientist and paper author. His hunch was that this beetle might be more closely related to Hydroscaphidae, a living family of miniature insects known as skiff beetles, placed in a different suborder from rove beetles.

Across the Atlantic, Martin Fikáček recalled a similar feeling upon comparing the description and photos with the classification of Leehermania as a staphylinid. To Fikáček, a scientist at the National Museum in Prague, the beetle seemed to be a closer fit in the Myxophaga—the suborder that contains skiff beetles. Scientist Chenyang Cai at China’s Nanjing Institute of Geology and Paleontology and several other authors came to the same conclusion.

One of the clues that Leehermania wasn’t really a staphylinid was its mandibles—the pincer-like jaws. “Staphylinids all have exposed mandibles, from at least some angle,” says Newton. “In Leehermania, what were originally interpreted as mandibles are actually maxillary palpi—a different mouthpart structure entirely. The mandibles aren’t exposed here at all, at least from what we can see.”

Another hallmark of staphylinid beetles is their somewhat club-shaped antennae, which start with a narrow base and get wider toward the tip. In Leehermania, the antennae were club-shaped, but the club was more narrowed toward the tip.

Given the hidden mandibles, distinct antennal shape, and other features, including “paratergites”—little plates on the sides of most staphylinid abdomens that are absent in Leehermania—and the shape of the female insects’ genitalia, something wasn’t adding up. Leehermania seemed to be a much better fit in the suborder Myxophaga than in Staphylinidae.

Thanks to the power of the internet, the scientists were able to collaborate freely and quickly across four continents. “The international collaboration that occurred here was really important to the success of the study,” said Shûhei Yamamoto, a Field Museum scientist and paper author who studies Staphylinidae and other beetles.

As the group’s hunch turned to a theory, then a study, then a formal analysis, the tests they ran showed Leehermania fitting nicely as a member of the beetle suborder Myxophaga, likely as a sister to the ancestors of today’s skiff beetles. This discovery means that the rove beetle family isn’t yet documented to be as old as scientists thought, but the skiff beetle family is now way older—Leehermania lived 226 million years ago, 100 million years before the next oldest fossil skiff beetle known.

Misclassification of extinct species happens all the time in science, for a variety of reasons.

For one, fossils can be extremely difficult to decipher. Since compression fossils like Leehermania are trapped in a sheet of rock, there is often only one viewing angle, though two in this case: a bird’s-eye-view called “dorsal,” or the top surface, and the “lateral” or side view. Any information about the species has to be gathered from these limited perspectives, so some information on colours, textures, patterns, anatomical details, and of course life-cycle information may be impossible to retrieve. Analysis is even more challenging when your specimens are only 2–3 mm long.

Lack of comparative data also causes problems for researchers. Not only are many characteristics of the insects lost in fossils, but until 2011, the large amount of data used here to test Leehermania’s placement in different families didn’t exist.

“Our analysis made use of a huge data set of morphological characters of beetles gathered for the ‘Beetle Tree of Life’ [BToL] project,” says Thayer. “That project was really crucial to our analysis and provided a framework upon which we were able to analyse Leehermania.” Four authors of the new paper, including Thayer and Newton, were among the authors of the published version of the BToL morphology paper. DNA-based analyses published by the BtoL project and other researchers were also essential to the Leehermania analyses.

Testing and revising the placement of living things in the tree of life is like working on a huge sudoku puzzle with contributors from all over the world. You have methods to figure out where the numbers should go, but if they’re incorrectly placed, you only know—eventually— based on their relationships to the surrounding numbers. If you carry on with the puzzle for too long with an incorrect placement, numbers filled in after the fact might also be incorrect. Revisiting Leehermania’s classification was important to help other researchers avoid using the fossils incorrectly to date analyses of beetles as a whole or identify other beetles as staphylinids based on Leehermania.

For the staphylinid family, losing their oldest ancestor produces new questions about how the family evolved.

At a time in the Earth’s history when life was still recovering after a mass extinction, the appearance of Leehermania and Staphylinidae is a testament to how resilient and adaptable beetles can be to diverse, and often harsh, living conditions.

“Throughout history, beetles have survived conditions that other animals have not,” says Fikáček. “As we study these insects, we might reveal some secret to evolutionary success that beetles possess.”