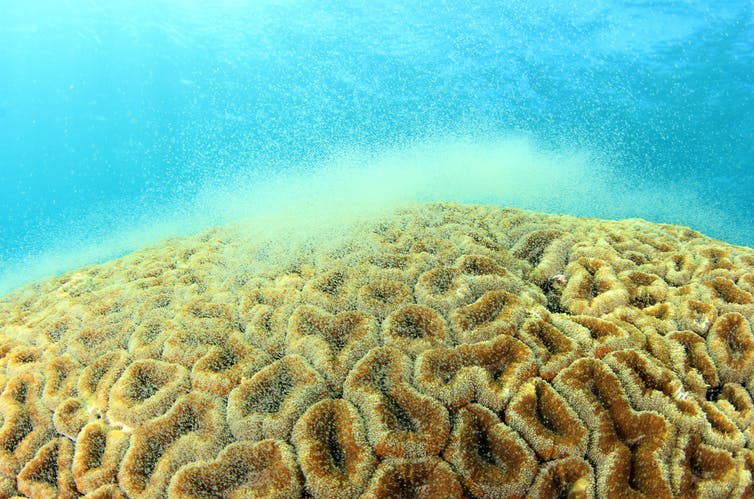 It’s rather tricky to reproduce if you’re stuck to the floor – unless you’re a coral. Their spectacular spawning events are a beautiful sight to behold. Once a year, they spill billions of sperm and eggs into the sea, peppering the deep blue with a palette of vivid reds, yellows, oranges, and whites.

But according to new research, some corals are no longer reproducing with the same clockwork timing, adding yet another survival threat to the long list already befalling reefs.

Corals are unlike any other animal on the planet. Thousands of polyps, each resembling an upside down jellyfish, live with each other in beds of limestone attached to the seabed. As they grow, they create the unified limestone skeleton we see as coral from the outside. Many of these coral colonies together create a complex three-dimensional reef structure that in turn creates a home for thousands of other plants and animals.

To get around their firm attachment to the seabed, most coral species reproduce by the mass release of sperm and eggs directly into the water at the same time. This annual mass spawning is one of nature’s most iconic events – rising underwater snowstorms so thick that they create brightly coloured slicks on the sea surface, visible from high above.

Astonishingly, corals synchronise their reproduction despite not having a brain, nor any direct way of communicating between colonies. Sperm and eggs can only survive in the water for a few hours, so in the vast ocean space this synchrony is essential for a good chance of fertilisation.

Until recently, little more than this was known about the intricacies of coral reproduction. But in the context of rapid coral decline, researchers have started applying genetic and reproductive research techniques to understand how environmental conditions are impacting coral fertilisation.

The new research monitored mass spawnings on corals reefs in the northern Red Sea. The researchers compared spawning timings of five coral species between 2015 and 2018 to results from two other studies conducted on the same species in the 1980s. In the species Acropora eurystoma, they also measured various reproductive traits, such as the number of sperm and eggs within a colony, the number of colonies reproducing in a given area and the size of coral colonies in the area – an index of their age.

In the 1980s, all the coral species monitored had one or two well-defined periods of spawning, where eggs and sperm were released within a few days of each other. But by the 2010s, some species released them over as many as a couple of months. With a lower concentration of eggs and sperm in the water at any one time, fertilisation becomes much rarer.

Although visually the coral reefs appeared in overall good health, the researchers found that the corals that weren’t spawning at the same time had no baby corals. This means that affected species can appear to be abundant, but in reality be nearing extinction through reproductive failure.

This is the first study to compare current spawning behaviour with historical data, providing evidence of increased desynchrony over time. Of course, there are many, many more coral species than the five measured in the current study, so we must be cautious of drawing general conclusions at this stage. However, evidence (without historical data for comparison) suggests that the same may be happening in other parts of the world too.

Unfortunately, it’s not yet known exactly what is causing the apparent decline in spawning synchrony, making it difficult to put forward a solution to the problem. Increases in light pollution from coastal development and hormone pollution from contraceptive pills have recently been shown to disrupt the natural triggers for coral spawning. The same is true of water temperature, which has increased by 1.2℃ at the test site since the 1980s. However, further research is needed to establish whether these factors are causing corals to reproduce out of sync with each other.

While these new advances in the understanding of coral reproductive biology are worrying, they also present opportunities. If we can identify why some corals are reproducing well and others not, we may be able to innovate new conservation methods that protect corals before they show signs of dying off. Using selective breeding techniques, for example, we may be able to imbue corals with greater resilience to the factors causing spawning desynchrony.

In the meantime though, all we can do to keep the glimmer of hope alive for reefs is redouble international efforts to tackle climate breakdown, and manage coastal areas responsibly. Without such intervention, these ecosystems rich in economic, ecological and cultural value will soon succumb to the multiple threats it faces.