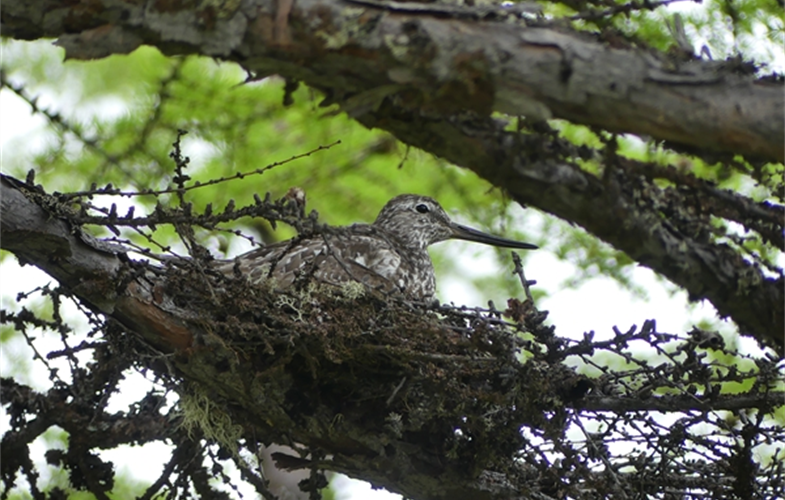 Not seen for decades, the nest of a globally-endangered bird found in Russia. Watch the Video: https://youtu.be/9ytbmsPGblo

WCS announced that an international team of biologists made an important discovery, something that had not been seen in more than 40 years: the nest of a globally-endangered Nordmann’s greenshank (Tringa guttifer).

This species, one of the most endangered shorebirds in the world, is thought to have a population of fewer than 2,000 individuals, and they nest only in Russia. They have experienced a steep population decline in recent decades, linked largely to habitat destruction and illegal hunting in Southeast Asia where they spend their winters.

“Almost nothing is known about their breeding ecology, which makes this new discovery so important,” said Dr. Vladimir Pronkevich of the Institute of Aquatic and Ecological Problems (Russian Academy of Sciences), the leader of the expedition.

The group found the nest on June 17th. Unlike most shorebird species, Nordmann’s greenshanks place their nests in trees. This one, situated on a branch nearly four meters (13 feet) up a larch tree, was constructed of twigs and lined with lichens that helped camouflage the eggs. Unfortunately the nest failed, with at least two of the four eggs depredated by a crow. This demonstrates that the threats to the survival of this endangered species extend beyond the problems encountered during migration and on the wintering grounds.

Later, the team also captured and released 7 adult greenshanks and 8 of their chicks, so they know there are more nests to be found in that area and studied in coming years. They attached unique leg bands to each captured bird so that their individual fates could be tracked. By early August, three of the adults had already been seen by birdwatchers in Shanghai, China, some 3,000 kilometres (1.864 miles) to the south. Most of the Nordmann’s greenshank population will travel another 3,000 kilometres to Thailand and Malaysia for the winter. Hopefully, some will be seen back at the Bay of Schastye next spring.

Said Dr. Jonathan Slaght, the Wildlife Conservation Society’s representative to the East Asian-Australasian Flyway Partnership: “It’s inspiring to see international collaborations like this in action. The work being done with Nordmann’s greenshanks in Russia informs their conservation in southeast Asia, and vice versa.”

By the end of July the team had extensively observed, photographed, and recorded several behaviours such as foraging, mating, and bathing. The team left the Bay of Happiness quite happy, taking with them the first-ever video of a Nordmann’s greenshank nest, the first photos of an incubating adult, and the first vocalizations of chicks.

This important work was funded by support from the Wildlife Conservation Society (with a grant from the Trust for Mutual Understanding), the East Asian-Australasian Flyway Partnership Small Grant Fund, and with additional support from the University of Florida School of Natural Resources, the United States Fish & Wildlife Service, the Institute of Aquatic and Ecological Problems (Russian Academy of Sciences), BirdsRussia, and the Federal Scientific Center of East Asian Terrestrial Biodiversity (Russian Academy of Sciences).