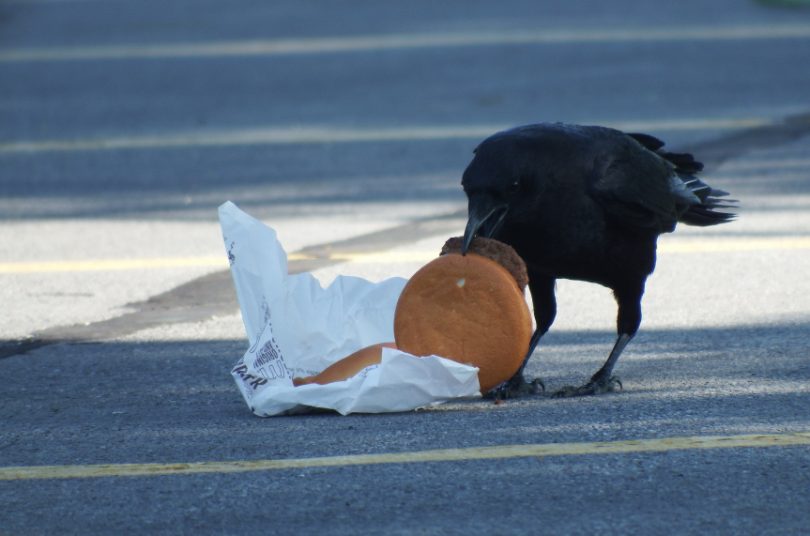 Animals that do well in urban areas tend to be the ones that learn to make use of resources such as the food humans throw away. But is our food actually good for them? A new study published in The Condor: Ornithological Applications suggests that a diet of human foods such as discarded cheeseburgers might be giving American Crows living in urban areas higher blood cholesterol levels than their rural cousins.

However, whether all that cholesterol was actually doing the crows any harm is trickier to answer. Survival rates during the first three years of life were lower for urban crows than rural ones, but cholesterol wasn’t the culprit—in the New York population, nestlings with higher cholesterol actually scored higher on measurements of their body condition. “Despite all the bad press that it gets, cholesterol has benefits and serves a lot of essential functions,” says Townsend. “It’s an important part of our cell membranes and a component of some crucial hormones. We know that excessive cholesterol causes disease in humans, but we don’t know what level would be ‘excessive’ in a wild bird.”

Still, Townsend doesn’t recommend that people start tossing cheeseburgers or other processed foods to the birds at their feeders. “Wild birds haven’t evolved to eat processed food, and it might have negative consequences that we didn’t measure, or that will only show up over longer periods of time,” she says. “Feeding wild birds can be a great way to connect with nature, and it can be a refreshing change to think that we’re doing something that helps animals out. At the same time, though, I do worry that some of the foods that humans give to wild animals, and living in an urban environment in general, might not be good for their health.”

Reference: Urbanization and elevated cholesterol in American Crows is available at https://academic.oup.com/condor/article-lookup/doi/10.1093/condor/duz040.

About the journal: The Condor: Ornithological Applications is a peer-reviewed, international journal of ornithology, published by the American Ornithological Society. For the past three years, The Condor has had the number one impact factor among 27 ornithology journals.