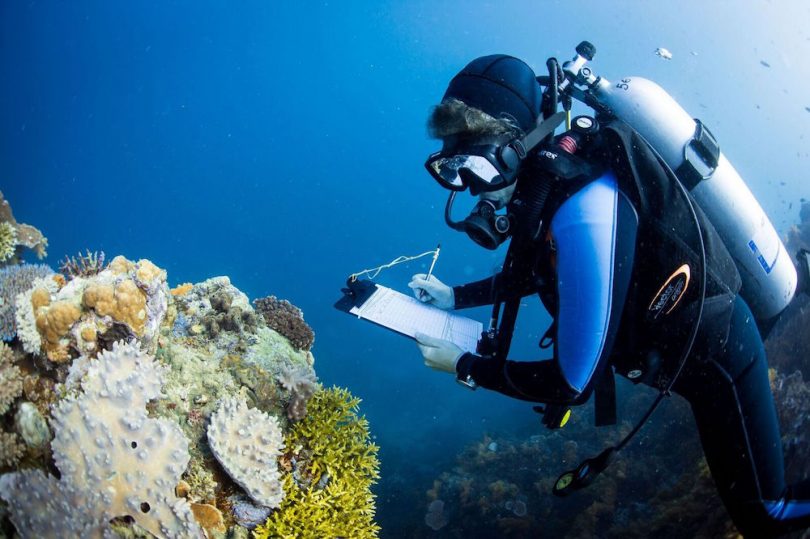 More than 80 marine scientists join together to identify key social-environmental pressures and human impacts on coral reefs. The authors recommend “protect, recover, and transform” strategies to save and protect coral reefs. More than 2,500 reef systems across 44 countries were analysed …

The largest study ever conducted of its kind has identified where and how to save coral reef communities in the Indo-Pacific, according to an international group of scientists from WCS (Wildlife Conservation Society) and other conservation NGOs, government agencies, and universities. The study outlines three viable strategies that can be quickly enacted to help save coral reefs that are threatened by climate change and human impacts.

Published today [12 August] in the journal Nature Ecology and Evolution, the study involved the efforts of more than 80 authors who surveyed coral abundance on more than 2,500 reefs across 44 countries in the Indian and Pacific Oceans. The findings revealed that the majority of reefs had functioning coral communities with a living cover of architecturally complex species that give reefs their distinctive structure. After the damage caused by severe heat stress during the 2014-17 El Niño event, the authors found nearly 450 reefs in 22 countries across the Indo-Pacific that survived in climate ‘cool spots’ that should be prioritised for urgent protection and management.

The landmark publication also presents a conservation framework of three management strategies (protect, recover, and transform) to safeguard reef ecologies and ecosystem services into the future.

“The good news is that functioning coral reefs still exist, and our study shows that it is not too late to save them,” said WCS Conservation Scientist Dr. Emily Darling, lead author of the study and leader of WCS’s global coral reef monitoring program. “Safeguarding coral reefs into the future means protecting the world’s last functioning reefs and recovering reefs impacted by climate change. But realistically – on severely degraded reefs –  coastal societies will need to find new livelihoods for the future.”

Good news on corals has become rare in the 21st Century as increasing carbon emissions and human impacts of overfishing, pollution and unsustainable development have led to predictions of a bleak future for tropical reefs and the millions of people who depend on them. The Indo-Pacific, a hotspot of coral reef biodiversity, in particular has been devastated by periods of severe heat stress and mass coral bleaching events in 1983, 1998, 2005, 2010, and most recently in the world’s longest, largest and most intense bleaching event in 2014-2017.

The study also identifies the minimum requirements to save functioning reefs. This required evaluating the impacts of 20 environmental, climatic, and human-caused stressors on reef-building corals.  The authors found that higher abundances of framework corals, the species that build the backbone of coral reefs, occurred in locations with fewer climate shocks and longer recovery windows. Higher coral abundances were also found farther from coastal populations and their associated markets and agricultural impacts.

The authors’ findings helped to formulate the three strategic choices of management for the reefs.

The study’s findings stress that strategic local management can play a role in helping protect corals through tools such as marine protected areas or other management restrictions that reduce threats and keep coral reefs above functional thresholds. However, the authors noted that local management can complement but not replace the need for worldwide efforts to limit carbon emissions.

Said Dr. Georgina Gurney from the ARC Centre of Excellence for Coral Reef Studies, James Cook University:  “While coral reef sustainability depends largely on reducing carbon emissions, identifying reefs that are likely to respond – or importantly, not respond – to local management is critical to targeting development and management strategies to build the well-being of the millions of people dependent on coral reefs across the globe.”

Said Gabby Ahmadia, director of marine conservation science at World Wildlife Fund and co-author of the study: “More than ever, we must consider how to manage local threats to coral reefs while keeping an eye to future climate impacts. This study will help policymakers and conservationists make informed management decisions for coral reefs and the communities that rely on them.”

This work was supported by the John D. and Catherine T. MacArthur Foundation and the Bloomberg Philanthropies‘ Vibrant Oceans Initiative.

The John D. and Catherine T. MacArthur Foundation supports creative people, effective institutions, and influential networks building a more just, verdant, and peaceful world. MacArthur is placing a few big bets that truly significant progress is possible on some of the world’s most pressing social challenges, including over-incarceration, global climate change, nuclear risk, and significantly increasing capital for the social sector. In addition to the MacArthur Fellows Program, the Foundation continues its historic commitments to the role of journalism in a responsible and responsive democracy; the strength and vitality of our headquarters city, Chicago; and generating new knowledge about critical issues.