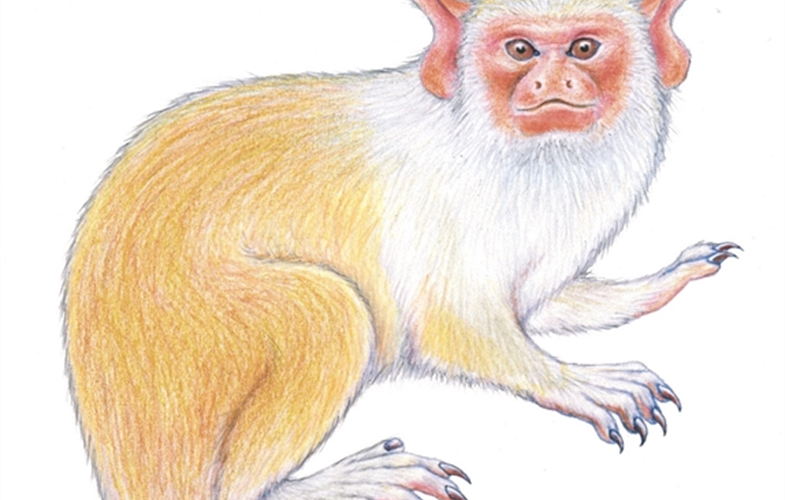 A new species of marmoset has been discovered in the south-west of Pará State in Brazil in an area of the Amazon that has suffered extensive illegal logging and agricultural incursion.

The region where the marmoset was discovered is “one of the main fronts of forest destruction within the ‘arc of deforestation’, a region infamously characterised by fast, intense and disordered conversion of forests to pastoral and agricultural land and human settlements,” according to the researchers. The destruction is happening, they say, “even within federal conservation units and protected indigenous lands.”

The new species has been named Mico munduruku after the Munduruku Amerindians who live in the area where the monkey was discovered.

Rodrigo Costa Araújo of the National Institute of Amazonian Research, Brazil, is the lead author of the paper describing the new species.

“After about seven days travelling on the Tapajós River we reached the place where I recorded the new species,” recalls Rodrigo. “When I first saw the marmosets I got very excited because I saw white tails – this is a very uncommon feature in Neotropical primates.”

While most other Amazonian marmosets’ tails are black, the new species has a white tail, feet and hands, white forearms with a beige-yellowish spot on the elbow, and beige-yellowish saddle.

Based on current knowledge, Mico munduruku occurs only within an area of approximately 55,000 km2 in south-western Pará State, Brazil.

Deforestation in the Amazon has accelerated markedly in recent months. In June 2019, 88% more forest was cleared compared with June 2018.

In addition to logging and agricultural expansion, four hydroelectric power plants have been approved for construction that will directly threaten the habitat of the monkey. “Just as we have discovered this species, we already need to be concerned about its survival. The threats to Mico munduruku will only increase as hydroelectric plants and complementary infrastructure schemes as roads and transmission lines are built, inducing more intense settlement and forest clearance in the region,” the researchers say.

In addition to the dam threat, Rodrigo says the region “is also a hotspot for gold miners, so there is dredging and digging of the river bed and its tributaries. It is a little-studied region and the biodiversity there is poorly known – having a new primate species described here clearly demonstrates that the habitat of still unknown species are being destroyed.”

The researchers say more studies are urgently needed in order to learn more about the marmoset. At the moment they say Mico munduruku should be considered as Data Deficient under the IUCN criteria for assessment of species conservation status.

Marmosets have claw-like nails on all digits except the hallux (the innermost toe, i.e. the big toe), and the clawed toes are used for the vertical climbing of and leaping between trees. It also has long lower jaw incisors and incisor-like canines used to gouge holes in the bark of trees.

Rodrigo and his team were supported in their discovery of the new marmoset by the Conservation Leadership Programme, a partnership between conservation NGOs Fauna & Flora International, BirdLife and WCS.

“This is an excellent result for a team that has spent several years conducting scientific research on southern Amazonian marmosets. This discovery demonstrates how much there is to learn about the primates of the Amazon and further raises awareness of the threats facing the rainforest at a critical moment for its future,” said Stuart Paterson, Executive Manager, Conservation Leadership Programme, Fauna & Flora International.

Dr Caleb McClennen, WCS Vice President for Global Conservation said: “WCS congratulates the research team that made this exciting discovery, which underscores the importance of protecting this biodiverse region from the threats of deforestation. We are incredibly proud to part of the Conservation Leadership Programme, which is empowering young and emerging conservationists to do cutting-edge biodiversity research like this around the world.”

“We are very proud of Rodrigo and the team for making such a significant discovery at this early stage in their careers. Rodrigo started out with the Conservation Leadership Programme 2012, studying Marca’s Marmoset in the Brazilian Amazon, and has continued to research this fascinating and imperiled group of primates. Passionate young people like this give us hope for the future of our planet’s forests,” said Sherilyn Bos, Programme Officer for Capacity Development, BirdLife International.

The discovery of Mico munduruku raises the total number of species from this genus to 15.

The paper announcing the discovery was published in the scientific journal PeerJ — the Journal of Life and Environmental Sciences and can be found at: https://peerj.com/articles/7019/

About the Conservation Leadership Programme: The Conservation Leadership Programme (CLP) was initiated in 1985 in response to the need for additional scientific data on threatened species. The programme focused on sponsoring UK university students to collect data on biological diversity overseas during their summer break. Over time, the programme has evolved to address changing conservation needs, and has become an international capacity building programme supporting young conservationists, the majority of whom are working in their own countries, to undertake applied biodiversity projects in less developed countries.

About Fauna & Flora International (FFI) (www.fauna-flora.org): FFI protects threatened species and ecosystems worldwide, choosing solutions that are sustainable, based on sound science and that take account of human needs. Operating in more than 40 countries worldwide, FFI saves species from extinction and habitats from destruction, while improving the livelihoods of local people. Founded in 1903, FFI is the world’s longest established international wildlife conservation organisation and a registered charity.

About BirdLife International: BirdLife International is the world’s largest nature conservation Partnership. Together we are 115 BirdLife Partners worldwide – one per country – and growing, with almost 11 million supporters, 7,000 local conservation groups and 7,400 staff. As the official authority for birds for the IUCN Red List of threatened species, BirdLife coordinates the process of evaluating all of the world’s bird species against the Red List categories and criteria, in order to assess their extinction risk. Find out more at www.birdlife.org