Home » Blue sharks use eddies for fast track to food 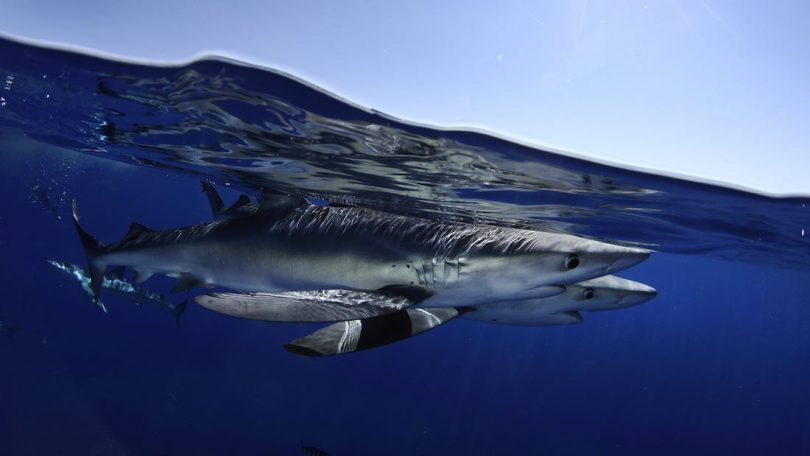 Blue sharks use large, swirling ocean currents, known as eddies, to fast-track their way down to feed in the ocean twilight zone—a layer of the ocean between 200 and 1000 metres deep containing the largest fish biomass on Earth, according to new research by the Woods Hole Oceanographic Institution (WHOI) and the Applied Physics Lab at the University of Washington (UW). Their findings were published August 6, 2019, in the journal Proceedings of the National Academy of Sciences.

Researchers tagged more than a dozen blue sharks off the U.S. Northeast Coast and monitored them for nine months. The tags relayed data back to the researchers via satellite, revealing that the sharks had spent a good portion of their days diving these whirling pockets of warm water down to the ocean twilight zone hundreds of metres below the surface. There, they’d spend an hour or so foraging for food like small fish and squid before returning to the surface to warm up before diving again.

Dives were less frequent at night, when many twilight zone animals make their daily migration from the ocean’s mid-water to feed at the surface. Camrin Braun, an ocean ecologist at UW and lead author of the study, said that an evening trip likely isn’t worth the effort for hungry blue sharks since the zone isn’t particularly well stocked after dark.

Braun, who conducted the research as a PhD student in the MIT-WHOI Joint Program in Oceanography, says the behavior of the blue sharks was generally similar to that of the white sharks the team tracked in a previous study last year. However, the two species had different preferences when it came to water temperature. White sharks, which are warm-blooded animals, used a combination of warm and cold-water eddies as a conduit to the twilight zone, while blue sharks—a cold-blooded species—relied exclusively on warm-water eddies.

“Blue sharks can’t regulate their body temperature internally to stay warmer than the ambient seawater like white sharks can,” said Braun. “We think this is why they show a clear preference for the warm-water eddies—it removes a thermal constraint to deep diving.”

Blue sharks are considered a “near threatened” species due to heavy fishing pressure on populations across the globe. This research helps fill important knowledge gaps about where they go and why, which can inform decision making to help protect them, said biologist Simon Thorrold, a coauthor of the study and Braun’s former advisor.

The work also underscores the importance of the ocean twilight zone as a critical biomass resource.

“The twilight zone is vulnerable to overfishing,” Thorrold said. “If we’re harvesting low-value fish there at the expense of high-value fish like blue sharks and other pelagic predators, that’s probably not a good tradeoff.”

This research is partially supported by funding from the Audacious Project, a collaborative endeavor housed at TED. Additional funding came from the Grassle Fellowship and Ocean Venture Fund at the Woods Hole Oceanographic Institution, the National Science Foundation, and the NASA Earth and Space Science Fellowship.

The Woods Hole Oceanographic Institution is a private, non-profit organization on Cape Cod, Mass., dedicated to marine research, engineering, and higher education. Established in 1930 on a recommendation from the National Academy of Sciences, its primary mission is to understand the ocean and its interaction with the Earth as a whole, and to communicate a basic understanding of the ocean’s role in the changing global environment. For more information, please visit www.whoi.edu.

Header image: Blue sharks are considered a “near threatened” species due to heavy fishing pressure on populations across the globe. Credit: Nuna Sá.