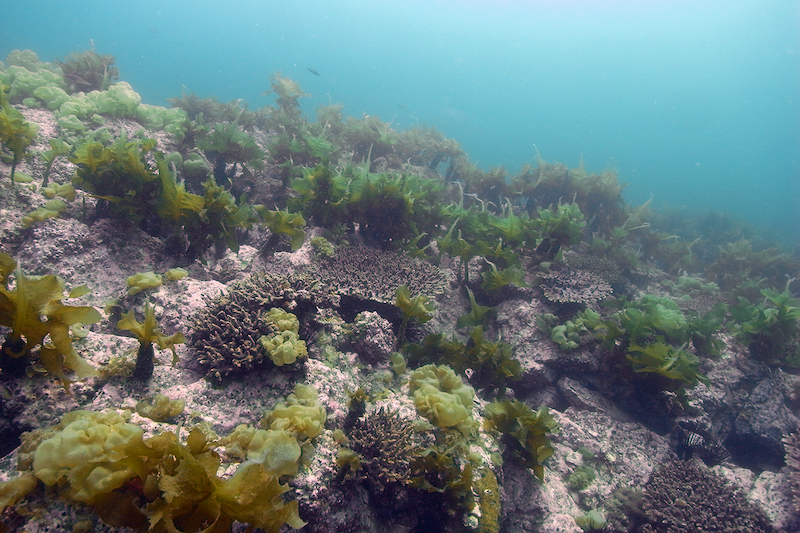 Coral reefs are retreating from equatorial waters and establishing new reefs in more temperate regions, according to new research in the journal Marine Ecology Progress Series. The researchers found that the number of young corals on tropical reefs has declined by 85 percent – and doubled on subtropical reefs – during the last four decades.

“Climate change seems to be redistributing coral reefs, the same way it is shifting many other marine species,” said Nichole Price, a senior research scientist at Bigelow Laboratory for Ocean Sciences and lead author of the paper. “The clarity in this trend is stunning, but we don’t yet know whether the new reefs can support the incredible diversity of tropical systems.”

As climate change warms the ocean, subtropical environments are becoming more favourable for corals than the equatorial waters where they traditionally thrived. This is allowing drifting coral larvae to settle and grow in new regions. These subtropical reefs could provide refuge for other species challenged by climate change and new opportunities to protect these fledgling ecosystems.

The researchers believe that only certain types of coral are able to reach these new locations, based on how far the microscopic larvae can swim and drift on currents before they run out of their limited fat stores. The exact composition of most new reefs is currently unknown, due to the expense of collecting genetic and species diversity data.

“We are seeing ecosystems transition to new blends of species that have never coexisted, and it’s not yet clear how long it takes for these systems to reach equilibrium,” said Satoshi Mitarai, an associate professor at Okinawa Institute of Science and Technology Graduate University and an author of the study. “The lines are really starting to blur about what a native species is, and when ecosystems are functioning or falling apart.”

New coral reefs grow when larvae settle on suitable seafloor away from the reef where they originated. The research team examined latitudes up to 35 degrees north and south of the equator, and found that the shift of coral reefs is perfectly mirrored on either side. The paper assesses where and when “refugee corals” could settle in the future – potentially bringing new resources and opportunities such as fishing and tourism.

The researchers, an international group from 17 institutions in 6 countries, compiled a global database of studies dating back to 1974, when record-keeping began. They hope that other scientists will add to the database, making it increasingly comprehensive and useful to other research questions.

“The results of this paper highlight the importance of truly long-term studies documenting change in coral reef communities,” said Peter Edmunds, a professor at the University of California Northridge and author of the paper. “The trends we identified in this analysis are exceptionally difficult to detect, yet of the greatest importance in understanding how reefs will change in the coming decades. As the coral reef crisis deepens, the international community will need to intensify efforts to combine and synthesize results as we have been able to accomplish with this study.”

Coral reefs are intricately interconnected systems, and it is the interplay between species that enables their healthy functioning. It is unclear which other species, such as coralline algae that facilitate the survival of vulnerable coral larvae, are also expanding into new areas ¬– or how successful young corals can be without them. Price wants to investigate the relationships and diversity of species in new reefs to understand the dynamics of these evolving ecosystems.

“So many questions remain about which species are and are not making it to these new locations, and we don’t yet know the fate of these young corals over longer time frames,” Price said. “The changes we are seeing in coral reef ecosystems are mind-boggling, and we need to work hard to document how these systems work and learn what we can do to save them before it’s too late.”

Some of the research that informed this study was conducted at the National Science Foundation’s Moorea Coral Reef Long-Term Ecological Research site near French Polynesia, one of 28 such long-term research sites across the country and around the globe.

“This report addresses the important question of whether warming waters have resulted in increases in coral populations,” says David Garrison, a program director in the National Science Foundation’s Division of Ocean Sciences, which funded the research. “Whether this offers hope for the sustainability of coral reefs requires more research and monitoring.”