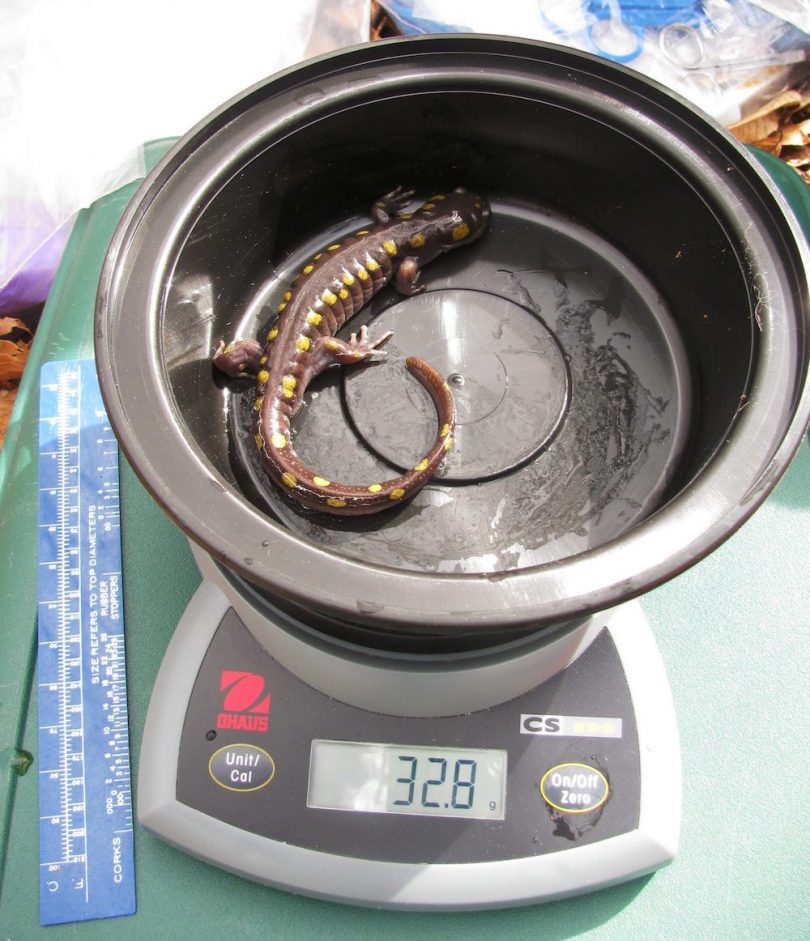 Mercury (Hg), and its more biologically available form, methylmercury (MeHg), are powerful neurotoxins that impact development and function of the central nervous system. The Northeast is considered a mercury “hotspot,” due largely to airborne mercury emissions originating in the industrialized Midwest. Few studies have examined mercury in northeastern vernal pools, even though these ephemeral wetlands provide critical breeding habitat for several species of amphibians and a diverse assemblage of invertebrates. A recent paper published in Ecotoxicology describes a groundbreaking investigation of mercury levels in vernal pool foodwebs in coniferous and deciduous forests, and reveals that biota from the pools may be vectors of MeHg to the terrestrial ecosystem.

Researchers from the Vermont Center for Ecostudies and Dartmouth College, with support from the Northeastern States Research Cooperative and National Institute of Environmental Health Sciences, intensively studied six vernal pools in the Upper Valley area of Vermont to document Hg levels in both pools and amphibian populations. To determine MeHg concentrations in amphibians, the researchers collected samples of Wood Frog and Spotted Salamander eggs and larvae, as well as blood and tissue samples from adults of both species. In addition, they collected water, soil, and leaf litter samples monthly for Hg analysis.

A naturally occurring element found in the earth’s crust, mercury is generally inert. It becomes a problem when it is released into the atmosphere—primarily through coal-fired power plants and industrial incinerators—and disperses widely before falling back to the ground via precipitation. Under certain environmental conditions, anaerobic bacteria convert this re-deposited inorganic Hg into its organic and more toxic form, MeHg, and it enters the food web.

“Because vernal pools are ephemeral—drying out in summer and re-flooding in the fall—and have low oxygen levels, they provide ideal conditions for the sulfate-reducing bacteria responsible for Hg methylation to thrive,” notes Steve Faccio, lead author of the paper.

Study results showed that MeHg concentrations of pool water varied considerably between pools due to a variety of factors, including water chemistry metrics such as pH, dissolved oxygen and dissolved organic carbon, water temperature, and the type of forest around each pool. In general, MeHg levels in the water tended to increase from spring through summer, coinciding with increases in water temperature and decreases in dissolved oxygen as pools dried.

Mercury levels in amphibian eggs were relatively low—similar to that of the surrounding water—suggesting that females did not off-load mercury burdens when depositing eggs. However, the team found that MeHg bioaccumulated rapidly in predaceous Spotted Salamander larvae (~50 to 100 times greater than their eggs), and moderately in omnivorous Wood Frog tadpoles (~10 to 20 times greater than their eggs). This has significant implications for any wildlife that feed on amphibian larvae, including a variety of vernal pool invertebrates such as diving beetles, backswimmers, dragonfly larvae, and others, as well as Eastern Newts, snakes, and birds.

Among adult frogs and salamanders, MeHg levels were roughly one-third to one-half that found in their larval stages, probably because terrestrial adults are exposed to lower Hg concentrations than aquatic larvae. Adult Spotted Salamanders had significantly greater amounts of MeHg compared to Wood Frogs, which is likely due to their longer life span (20-30 years) compared to Wood Frogs (3-5 years). These results are the first to report Hg levels in Spotted Salamanders and adult Wood Frogs.

This work demonstrates that vernal pools are important hotspots of mercury bioaccumulation, and that vernal pool amphibians may represent a significant source of mercury to terrestrial predators. In recent years, EPA regulations have led to demonstrably reduced Hg emissions through the Clean Air Act—but unfortunately, recent rollbacks of many of these advances casts uncertainty on the future of this dangerous toxin’s presence in our environment.

Provided by Vermont Center for Ecostudies.