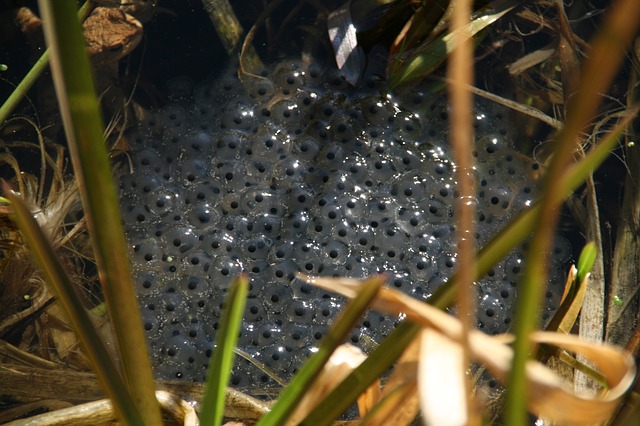 In this article, Laurence Jarvis (Head of Conservation at Froglife), takes a closer look at reproductive behaviours in amphibians…

There are currently 8,004 species of amphibian (AmphibiaWeb, 2019) of which 88%, (7,064 species) are frogs and toads (anurans). These species exhibit an astonishing range of reproductive modes, of which only a small proportion lay eggs in water which hatch into aquatic larvae. In total, anurans exhibit 40 different modes of reproduction which are based on where the eggs are laid, egg type, and patterns of larval development. Examples of different reproductive modes include: depositing eggs in foam nests which float on water; laying eggs on the back of the female; laying eggs on the ground or in burrows; and depositing eggs on leaves with tadpoles that hatch and fall into water below (Duellman & Trueb, 1986). Of the 40 modes, direct developing embryos are perhaps the most unusual for amphibians. In these species, no water is required for development and instead the tadpoles develop within eggs which then hatch directly into froglets. This type of reproduction has evolved multiple times independently in anurans and currently 1,400 species are recognised to develop in this way (Stuart et al., 2008). Our knowledge of the full range of reproductive modes is still lacking as new patterns of reproduction are still being discovered. For example, some recent discoveries include novel nest building behaviour in the Kumbara night frog (Nyctibatrachus kumbara) from southern India (Gururaja et al., 2014) and unique foot-flagging behaviour has been observed in the Wayanad dancing frog (Micrixalus saxicola) a small torrent frog from India (Preininger et al., 2013). In this article we discuss some further recent discoveries of novel reproductive behaviours in anurans.

The Western Gnats in southern India has been a recent hotspot in discoveries of novel reproductive behaviours in anurans. Due to its glacial history and diversity of habitats, this region supports over 180 species of amphibian which exhibit a range of reproductive patterns. The Chalazodes bubble nest frog (Raorchestes chalazodes) inhabits remote tropical forests in the Western Gnats. This species was presumed to be extinct, until its recent rediscovery in 2011 (Ganesan et al., 2019). Sheshadri et al. (2015), have recently reported a unique breeding behaviour in this frog. Males were found living inside the shafts of bamboo canes where they guarded the eggs laid by the females (Figure 1). It appears that small holes created by insects in the lower shafts of bamboo canes are utilised by this frog, which uses the hollow interior for breeding. Males call to attract females, which lay 5-8 large eggs in clusters inside the bamboo. The male guards these eggs from predators until they hatch into free-living froglets. This is the first time that this type of reproduction has been recorded in any amphibian species and thus represents a unique reproductive mode (Sheshadri et al., 2015). Unfortunately, this frog remains critically endangered, only occurring in five localities, and is highly threatened due to over-harvesting of bamboo (Sheshadri et al., 2015). Unless unregulated over-harvest of bamboo is halted, this species may well go extinct due to lack of suitable breeding habitat.

Many species of male anuran possess vocal sacs which they use during breeding to vocalise to attract females. In several frog species visual cues of the inflating vocal sac make the acoustic signal more attractive to females or aid to deter competing males. Male African reed frogs (Hyperoliidae) possess a prominent gular patch on the vocal sac which they use to attract females and may also function as a visual cue to competing males (Figure 2). Starnberger et al. (2018) found that in the spotted reed frogs (Hyperolius puncticulatus) males do not respond to the vocal sac of other males but when they heard males calling they performed a previously undescribed gestural display: a tapping behaviour consisting of a series of front and hind limb lifts. It is thought that these gestures serve to deter males and also attract females who may be close by (Starnberger et al., 2018).

Many anurans form amplexus during breeding where by the male takes the female in an embrace. Since fertilization is external in most anurans, the position of the male ensures that he is able to release his sperm to fertilize her eggs as she releases them. The night frogs (genus Nyctibatrachus) from India contains 28 species, many of which have only recently been described. In all Nyctibatrachus species, egg clutches are deposited on rocks or vegetation overhanging water, and tadpoles fall in the water after hatching, where they continue their development. Several novel types of amplexus have been described in this genus (reviewed in Willaert et al., 2016) such as a short axillary amplexus in pairs of the Kumbara night frog (N. kumbara) followed by a handstand, or the complete absence of amplexus in N. petraeus where the female deposits her eggs prior to the male fertilizing them. Willaert et al. (2016) have recently discovered a new breeding behaviour in the Bombay night frog (N. humayuni). During breeding the male forms a loose amplexus on the female, lasting only a few seconds and differs from all previously described amplexus types in anurans. When mounted, the male rests on the female without grabbing her tightly, but instead uses his hands to hold on to a leaf, branch or tree trunk (Willaert et al., 2016). Since the male does not have time to fertilise the eggs whilst engaged with the female, the authors propose that the male releases his sperm onto the back of the female and the eggs are subsequently fertilized by the sperm running down her back and hind legs. This hypothesis is supported by the observation that the female remains motionless after egg deposition for several minutes with her hind legs stretched around the freshly deposited clutch (Willaert et al., 2016) (Figure 3). In addition, females have been observed to make a call which is highly unusual. Female calling behaviour has so far only been reported in only 25 anurans, representing less than 0.5% of the total anuran species that are currently recognized (Willaert et al., 2016). It appears that the females call to aid in mate recognition and location.

This study, along with others recently published, demonstrate the range of reproductive behaviours that are exhibited amongst anurans. The Nyctibatrachus frogs are one of several unique taxa in the Western Ghats biodiversity hotspot and are heavily threatened by human activities. Understanding the ecology of these and other poorly known species is of major importance for planning and successfully implementing conservation strategies.