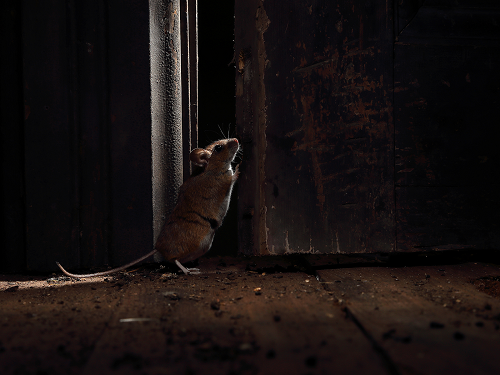 The results of the Mammal Society’s annual photography competition are in. The winner of Mammal Photographer of the Year 2019 is Roy Rimmer from Lancashire with his atmospheric photograph “Woodmouse Shut that Door”.

Roy explains how he managed to take advantage of the mouse’s sweet tooth to get the perfect shot “…I baited the entrance of the shed door and placed one flash outside the entrance to replicate the moonlight and one flash inside the entrance which I diffused just enough in order to keep a rim light. I struggled for several nights to get the mice in the right place so I decided to smear chocolate near the bottom of the door. This encouraged the mice to stand for a while whilst it licked the bait giving me the opportunity to create the image.”

MPOY judge, nature and conservation photographer Peter Cairns said of the winning photograph “This image stood out for me as soon as I set eyes on it. It’s great to see an under-represented species so creatively captured. The lighting is spot on and, perhaps more importantly, there’s a story delivered with a splash of humour.” Roy wins a conservation holiday in Dorset with Wild Days Conservation.

Runner up in the competition is “Minke Miniscus” by Carl Chapman from Norfolk. The stunning shot was taken off the Ardnamurchan Peninsula in Scotland. “It was a very still day and we came across circa seven Minke Whales. This one was rather curious and circled the boat several times each time skimming the underside of the surface before rising to breathe.”

Chief judge, Hilary Conlan, editor of Mammal News magazine said “Carl’s photograph works really well with the completely smooth silky look of the water but clearly a giant underneath. It is unusual to capture the exact moment before the water is broken. This photograph also serves as a good reminder that we are an island nation and should not forget that the mammal community is not just terrestrial.” Carl wins a two day stay at Knepp Wildlife Safaris.

The first prize in the Young Photographer of the Year 15 and under category went to Katy Read from Newcastle on Tyne for the second year running. Katy’s photograph “Hide and Seek” made an impact on the judges. Katy took the photo at Craignure, Isle of Mull “I spent a week of my summer holidays on Mull, and we stayed in a little cottage by the sea. We wandered down to the foreshore before we had even unpacked the car, and much to my surprise and delight I saw my first ever pair of wild otters! This one spent a good ten minutes investigating a patch of floating seaweed, and I crept closer and closer whenever it was under-water.”

Wildlife photographer and ecologist Brett Lewis said “I enjoyed this image as it reminds me of being on the shoreline on the western isles of Scotland, when I last encountered a British otter. Katy has captured the inquisitive nature of the otter as it peeks through the bladder-wrack seaweed, which in turn provides a sense of place and purpose. The otter was likely out and about fishing for small fish and crustaceans, among the algae, and the photograph captures this story very well.” Katy wins a £50 book voucher courtesy of NHBS.

First prize in the 16-18 Years category this year went to 17 year old William Evans from Shropshire “My dad and I were on our way to Strumpshaw Fen, when a little brown mound caught my eye. At first I thought it was a mole hill, but on closer inspection it turned out to be the back of a hare. We inched ever closer until it finally popped its head up and almost immediately bolted, leaving just a split second to snap this picture of it – staring me dead in the eye.”

Competition judge Brett Lewis was impressed “William has captured the light very well in this image. Using backlighting in this manner subtly draws out the lovely textures of the hare’s fur and captures the bokeh effects of light on the succulent green crop shoots. The hare is aware of the photographer’s presence and it would seem that William has managed to capture an image just before the hare darts off across the field. A fleeting moment in natural history recording.” William wins a day of mammal photography at the Westcountry Wildlife Photography Centre.

The Mammal Comedian prize was put to the vote on social media. The award goes to the photograph that really makes the voters smile. This year the first prize was won by Richard Campion’s shot of a bored mountain hare, which won with an impressive 58% of the total votes received. Richard wins a pair of binoculars and a wildlife book courtesy of CJ Wildlife.

The winner of the 2019 Mammal Society Member’s photograph award has this year gone to Tris Pearce of Shropshire with his photograph of a polecat. The beautifully lit image was taken in a friend’s garden in North Wales from a temporary hide around eight feet away, using a two flash system on a trigger. Tris wins a year’s subscription to British Wildlife Magazine donated by NHBS.

Mammal Society Chair Professor Fiona Mathews said “Every year we are really thrilled to receive photographs of such a diverse range of mammals. 2019 is notable as the year we received some lovely images of a Minke whale, a bearded seal and a walrus, mammals which are a relatively rare sight along the shoreline of the UK and Ireland. Next year we are going to introduce a new category for rarely photographed species, so watch out for announcements about this in the Autumn.”

All winning and highly commended photographs can be seen on the Mammal Society’s Flickr page and at the MPOY2019 exhibition which is this year taking place at the University of Glasgow at the start of the Mammal Society’s annual Spring Conference. Entry to the exhibition and the Cranbrook Lecture on Friday 29 March is free to the public. For more details go to https://www.mammal.org.uk/events/the-mammal-societys-65th-spring-conference/.