Home » The why, what and where of the world’s black leopards 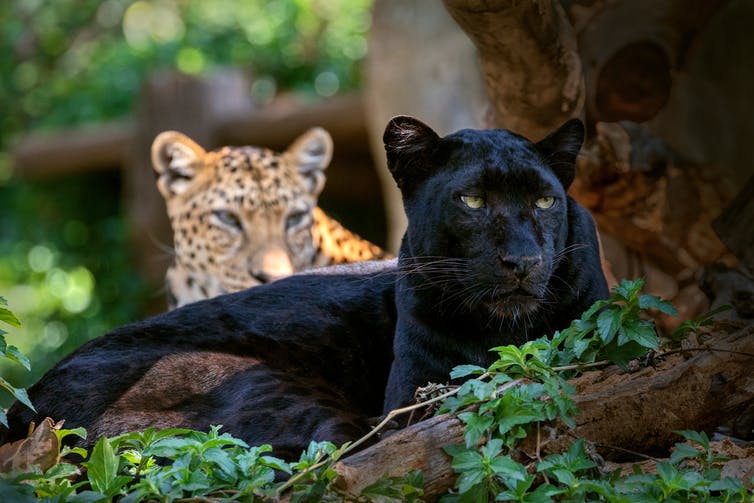 Where are black leopards found in Africa?

There have been a number of reports of black leopard in Africa, but very few confirmed sightings.

A 2017 global review of black leopard observations found reports of the animal in Ethiopia, Kenya, and South Africa dating back to 1909. But the only confirmed report was from Ethiopia.

Black leopards only differ from other leopards in the colour of their coat, a genetic variation that’s recessive and known as “melanism”.

Black leopards are found more often in densely forested habitats. Most confirmed sightings come from south-east Asia. The concentration of these are in the Malay Peninsula, where more than 90% of leopards are black. The frequency and distribution of black leopards in Africa is still part of ongoing research.

Based on what’s known about the type of terrain black leopards prefer it’s predicted that they would be present along the equator across western, central and eastern Africa.

We started our leopard conservation programme nearly two years ago in Laikipia County, central Kenya. The goals of our research are to determine population abundance and status of leopards in the area, and to mitigate human-leopard conflict.

As part of this research, we began recording black leopard observations last year. Since then we have confirmed three different melanistic individuals in our study area, suggesting that these leopards may be more common than first thought.

Why are they black, and does this offer any advantages over other leopards?

Melanism in leopards comes from a mutation that knocks out a gene that regulates the production of melanin. This causes an over production of pigment which turns the coat black.

The coat still has all the same features as a non-melanistic leopard, including the rosettes or spots which is one of the pieces of evidence we used in our study to scientifically confirm black leopard presence in Kenya.

Broadly, melanism has arisen independently in the cat family multiple times, and exists in 13 of the 37 cat species in the Felidae family. This suggests an adaptive significance to carrying this trait.

Black leopards are thought to persist in densely forested habitats, because it offers additional camouflage against shaded or dark backgrounds. For example, in tropical forests in the Malay Peninsula, melanism is displayed at such a high frequency that it’s likely that this is an advantageous trait in natural selection, rather than occurring by chance alone.

So, it’s interesting that our research has confirmed black leopards living in an open, arid environment in Kenya, where shade is limited.

This raises questions about whether being black in an arid environment influences hunting strategy, mating and reproduction. And whether there are natural selection mechanisms, other than camouflage, that allow melanism to persist in leopards.

Are there any specific threats faced by black leopards, and what needs to be done to protect them?

Leopards face a number of threats, including habitat loss, prey loss, conflict with humans and poaching and trafficking of their parts. These threats face all leopards, black included.

It’s unknown if black leopards face more persecution than non-melanistic leopards. If a leopard were to kill livestock, it would face persecution from locals regardless of its coat colour. However, through our conversations with communities we found stories that reveal a level of protection towards the big cats. When hunting in Kenya was legal, some guides refused to shoot black leopards. In Samburu culture in the Laikipia Plateau, owning a black cow is thought to be lucky to livestock herders, and the principle of rarity extends to black leopard. Sighting one is thought to be a symbol which requires interpretation and reflection.

Hopefully the global attention garnered recently by the black leopard images will move public consciousness to recognise leopards and their plight in conservation.

Header image: About 11% of all leopards are black. Credit: jeep2499/Shutterstock.