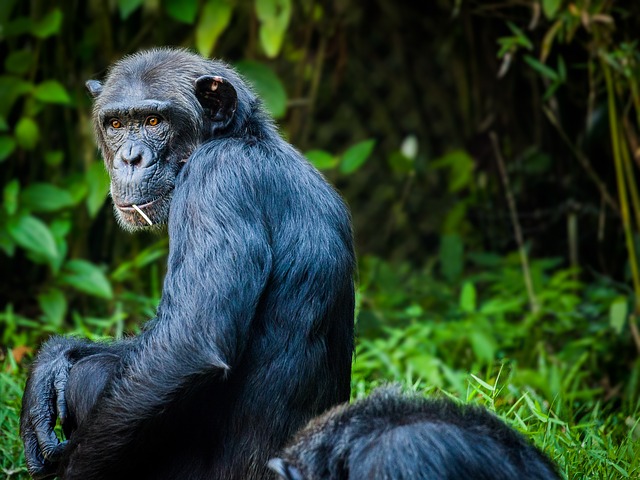 Chimpanzees are well known for their extraordinary diversity of behaviours, with some behaviours also exhibiting cultural variation. An international research team led by the Max Planck Institute for Evolutionary Anthropology and the German Centre for Integrative Biodiversity Research (iDiv) investigated whether chimpanzee behavioural diversity is reduced under high human impact. By comparing sets of chimpanzee behaviours across a large number of social groups exposed to different levels of human disturbance, the scientists found a reduction in behavioural diversity when human impact was high…

Chimpanzees exhibit exceptionally high levels of behavioural diversity compared to all other non-human species. This diversity has been documented in a variety of contexts, including the extraction of food resources, communication and thermoregulation. Many of these behaviours are assumed to be socially learned and group-specific, supporting the existence of chimpanzee cultures. As all other great apes, chimpanzees have come under enormous pressure by human activities, leading to a change of the natural environment. Their prime habitat, tropical rainforests and savanna woodlands, are increasingly converted to agricultural farmland, plantations and settlements, or otherwise degraded by the extraction of natural resources and infrastructure development.

An international research team, led by Hjalmar Kühl and Ammie Kalan of the Department of Primatology at the Max Planck Institute for Evolutionary Anthropology and the German Centre for Integrative Biodiversity Research (iDiv), compiled an unprecedented dataset on 31 chimpanzee behaviours across 144 social groups or communities, located throughout the entire geographic range of wild chimpanzees. Whereas part of this information was already available in the scientific literature, the international research team also conducted extensive field work at 46 locations, as part of the Pan African Programme, across 15 chimpanzee range countries over the last nine years. The particular set of behaviours considered in this study included the extraction and consumption of termites, ants, algae, nuts and honey; the use of tools for hunting or digging for tubers, and the use of stones, pools and caves among several others.

The occurrence of behaviours at a given site was investigated with respect to an aggregate measure of human impact. This measure integrates multiple levels of human impact, including human population density, roads, rivers and forest cover, all indicators for the level of disturbance and the degree of land cover change found in chimpanzee habitats. “The analysis revealed a strong and robust pattern: chimpanzees had reduced behavioural diversity at sites where human impact was high”, explains Kalan, a researcher at the Max Planck Institute for Evolutionary Anthropology. “This pattern was consistent, independent of the grouping or categorization of behaviours. On average, chimpanzee behavioural diversity was reduced by 88 percent when human impact was highest compared to locations with the least human impact.”

Potential mechanisms for loss of behaviours

As is known for humans, population size plays a major role in maintaining cultural traits and a similar mechanism may function in chimpanzees. Chimpanzees may also avoid conspicuous behaviours that inform hunters about their presence, such as nut cracking. Habitat degradation and resource depletion may also reduce opportunities for social learning and thus prevent the transfer of local traditions from one generation to the next. Lastly, climate change may also be important, as it may influence the production of important food resources and make their availability unpredictable. Very likely a combination of these potential mechanisms has caused the observed reduction in chimpanzee behavioural diversity.

“Our findings suggest that strategies for the conservation of biodiversity should be extended to include the protection of animal behavioural diversity as well”, says Kühl, an ecologist at the iDiv research centre and the Max Planck Institute for Evolutionary Anthropology. “Locations with exceptional sets of behaviours may be protected as ‘Chimpanzee cultural heritage sites’ and this concept can be extended to other species with high degree of cultural variability as well, including orangutans, capuchin monkeys or whales.” These propositions are in accordance with existing biodiversity conservation efforts, such as the Convention on Biological Diversity or the Convention on the Conservation of Migratory Species of Wild Animals, of the United Nations Environment Programme, which calls for the protection of biological diversity in its entirety, including behavioural diversity of culturally rich wildlife.