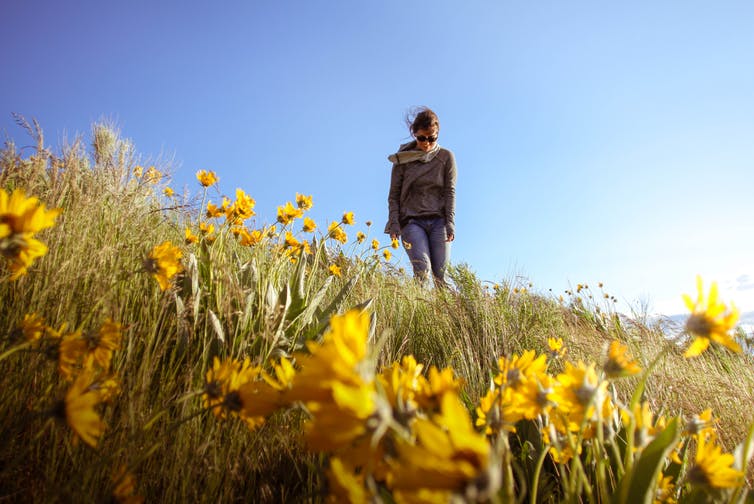 The Beast from the East, a polar vortex which brought freezing conditions to the UK, arrived on February 26 2018. Two days later there was a minimum temperature of -11.7°C (10.9˚F) at South Farnborough in Hampshire, and a maximum of only -4.8°C (23.4˚F) at Spadeadam in Cumbria.

In sharp contrast, on February 26 2019, temperatures reached 21.2˚C (70.2˚F) at Kew Gardens in south-west London – the warmest winter day since records began. In February 2019, bumblebee queens were out looking for nest sites, adult butterflies were emerging from their winter hibernation and blossom appeared on some trees and shrubs. But what will be the long-term effects of 2019’s early spring?

The relatively new science of phenology examines the timing of the seasons by plotting the calendar records of first plant bud, first flower, first nesting behaviour and first migrant arrivals. Over the past three decades, these records have confirmed that spring temperatures are generally arriving earlier in the year.

As the days get longer and warmer in the northern hemisphere, bird species such as the barn swallow follow these natural cues to depart for British habitats, where they nest and rear their young. These insectivorous migratory birds time their breeding season to coincide with insects being present in sufficient numbers to feed their young.

While the main trigger for birds to migrate from their overwintering grounds to Britain is the length of daylight, temperature will also fine-tune the arrival date. An early spring means that insects could emerge and breed before migratory birds arrive.

Once in the UK, the birds may find there are fewer insects to eat and this results in fewer chicks fledging, which leaves their predators, including the sparrowhawk and the stoat, with less to eat. The disconnect between the arrival of insectivorous birds and the abundance of insects ripples through the ecosystem, affecting other animals and plants that at first sight may not seem linked to this seemingly benign change.

Of course, much depends on how long the warm weather lasts and what follows. The mild conditions in 2019 have prompted buds to burst on some plants – this makes the flowers and leaves vulnerable if the weather reverts to colder conditions. If the temperature drops to low single figures in degrees Celsius but remains above freezing, growth rate will slow and the plant’s growth will be stunted. A hard frost, on the other hand, would damage or even kill any of the flowers and leaves that have emerged during the warm spell.

At the end of twigs is the apical meristem – the site where rapid cell division generates new plant material which results in the twigs growing longer each year. No longer protected from frosts within a bud, apical meristems are vulnerable to damage by frost. The result is that twigs will stop growing. Rather, a new apical growth point will establish itself from a bud nearer to the main trunk of a tree or the main stem of a bush. The long-term effect is that a twig develops in a different direction, and the plant carries this signature of frost damage for the rest of its life.

An early spring might also accelerate climate change. Scientists at the Vienna University of Technology and the University of Leeds studied satellite data for the northern hemisphere – from southern Europe and Japan up to and including the Arctic tundra – and demonstrated that in many regions of the Earth, an early spring leads, counter-intuitively, to less plant growth.

This may be because certain plants have a predetermined growth period. Growth in early spring means an early cessation of growth later in summer or early autumn. Greater plant growth in the spring could also result in increased transpiration – the process by which moisture is drawn through plants from roots to small pores on the underside of leaves, where it becomes vapour which is released to the atmosphere. This causes a higher demand for water during the growing season which cannot be met if the summer and autumn are also dry. The result of this early growth is limited plant growth overall through the entire year.

Plants that do not grow as big as they might absorb less carbon, so reduced plant growth means less carbon stored in vegetation, and that in turn means more carbon dioxide in the atmosphere, more warming and even earlier springs – a positive feedback loop.

Many people have worried about the unseasonable warmth and spring-like conditions of February 2019. As unseasonably mild weather brings about changes in plant growth that could accelerate climate change and widen the disconnect between elements of ecosystems, this unusual week may leave an even more worrying legacy.

However, even in the midst of a winter warm spell, the Met Office forecast predicts less mild and more changeable conditions to come – showery rain in some parts and stormy conditions elsewhere, with overnight frosts still possible. There is even a mention of snow on high ground. Such are the vagaries of the British weather.