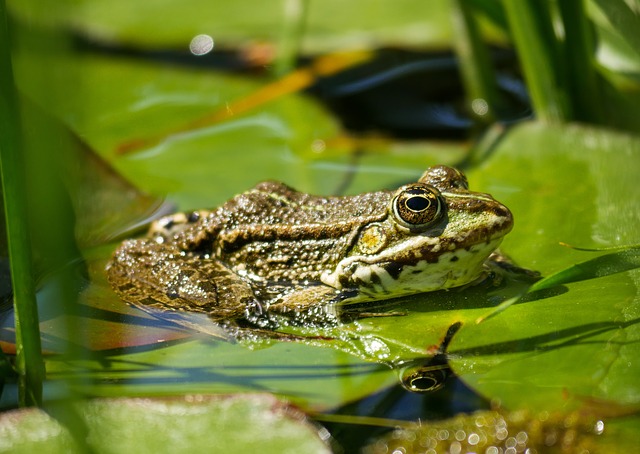 In this article, Laurence Jarvis (Head of Conservation at Froglife), takes a closer look at the latest amphibian research…

Amphibian chytridiomycosis, caused by infection with the fungus Batrachochytrium dendrobatidis

(Bd), is the most devastating vertebrate disease on record. Bd is found on all continents except Antarctica and the most dramatic declines of amphibians have occurred in Central and South America, Australia and the west coast of North America. Reservoir hosts are species which may transmit the disease to another species, without exhibiting symptoms or suffering from the disease. In Australia scores of amphibian species have declined due to Bd and many populations have dramatically fallen. The common froglet, Crinia signifera, is a common species which occurs throughout south-eastern Australia and it co-exists alongside many declining species which are susceptible to Bd. It reproduces in the same breeding ponds and occupies shared terrestrial habitats, and is therefore potentially capable of transmitting diseases to other species. Branelly et al. (2018) tested the potential for C. signifera to transmit Bd to other species of frog. Of the 526 individual C. signifera frogs studied, 79% tested positive for Bd, but showed no signs of infection. These results indicate that C. signifera is an effective reservoir host for Bd and may keep levels of Bd high at sites where threatened species have declined. It may therefore promote the spread of the disease among other more susceptible species. The findings of this study are important as they demonstrate that when developing conservation actions and reintroduction efforts, it is important to consider the ecology of the whole amphibian community so that the risk of disease reservoirs can be reduced (Branelly et al., 2018).

The impact of pesticides on amphibians in their terrestrial habitats are poorly understood (Fryday et al., 2012). Although many laboratory studies have demonstrated that pesticides can have negative effects on amphibians in aquatic habitats, few have examined the impacts of chemicals when amphibians are on land. Pesticides occur frequently in amphibian terrestrial habitats and accumulate in their tissues. Amphibians are at particular risk to pesticides and other agricultural chemicals compared to birds or mammals since they have semi-permeable skin which can absorb toxic substances. Studies in recent years have demonstrated that amphibians often migrate across terrestrial habitats when agricultural chemical applications are at their highest in the spring (Berger et al., 2013). However, the exact levels of exposure to amphibians and the relative risks remain unknown.

Swanson et al. (2018) carried out a study to try and obtain further information on the risks posed to amphibians in terrestrial habitats. They carried out a field study on the northern leopard frog (Lithobates pipiens) of North America using a unique method involving a silicone Passive Sampling Device (PSD) to determine whether pesticides occurred close to individual animals living in different habitats. They also used radio tracking devices to assess the survival and determine the amount of time that individual frogs spent in particular habitats. Swanson et al. (2018) found that pesticide concentrations were highest in frog tissues in May compared to August, which corresponds to highest amphibian movement and pesticide use. They also found agricultural chemicals in amphibian habitats at sub-lethal concentrations including herbicides (atrazine and metalochlor), the organophosphate insecticide, chlopyrifos, and several fungicides. Although these chemicals were not at lethal levels, sub-lethal effects may be equally detrimental to the frogs. For example, atrazine can disrupt hormonal responses in frogs, reduce immune responses and alter their behaviour. Metolachlor slows development and growth and has negative effects on the thymus gland and when it co-occurs with atrazine, the effects are considerably worsened. Chlorpyrifos causes increased time to metamorphosis while exposure to fungicide formulations containing pyraclostrobin decreases growth and development in larval amphibians (see references in Swanson et al. 2018). Frogs in this present study spent 58% of their time in grasslands which had the lowest agricultural chemical concentration, however, frogs did spend a small amount of time in agricultural fields. The results of this study highlight the potential and risk of exposure of amphibians whilst migrating to breeding ponds in the spring and during occupancy of terrestrial habitats.

Environmental DNA (eDNA) analysis is a tool for rapidly and effectively detecting the presence of a specific species using the DNA left behind in the environment. Metabarcoding is a more recent technique which can detect multiple species. However, the effectiveness of this approach remains to be tested. Harper et al. (2018) carried out a large scale study of 532 ponds to determine whether metabarcoding is as effective at detecting targeted species, such as the great crested newt, compared to eDNA techniques. Results from their study indicate that eDNA metabarcoding could potentially be a promising method for detecting many species in an ecosystem within freshwater ponds. However, at present, the method is less sensitive than standard single species eDNA methods for great crested newts and improvements are required to raise metabarcoding to the same level of detection as conventional methods (Harper et al., 2018).