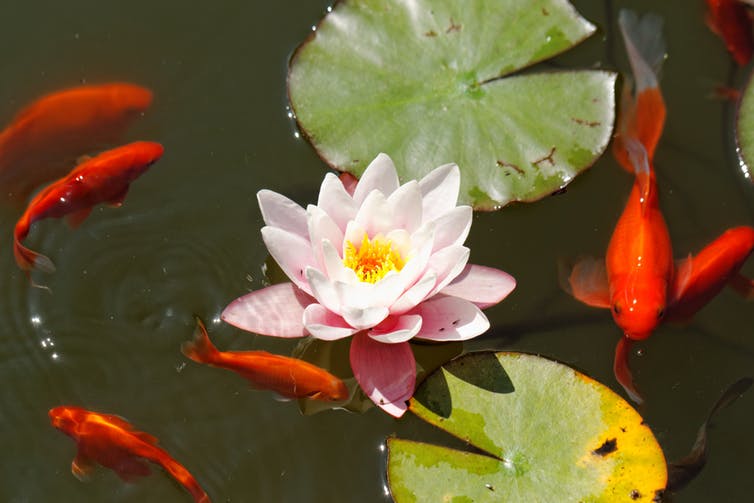 Ponds are taken for granted. Perhaps it’s because most of us have seen them – and on occasion, fallen into them – and think they’re only good for goldfish. Ponds may be the number one habitat for children’s “minibeast” hunts, but we are supposed to grow out of them in adulthood.

As James Clegg, a 20th-century British naturalist wrote, ponds are

a field particularly suited to the activities of the amateur, whose humble pond-hunting, if carried out systematically and carefully, may well result in valuable contributions to science.

But all-too often, ponds are missed out of conservation strategies which are instead fixated on larger lakes and rivers. This is a serious omission – ponds are the most common and widespread habitat for all plants and animals across the continents and islands of Earth, from Antarctica to the tropics. Perched on the surface of Alpine glaciers or waiting out desert droughts to refill with the rains, deep in equatorial forest or amid the city sprawl. They could well be found on Mars.

The past 20 years have seen a blossoming of research into ponds, led in the UK by the Freshwater Habitats Trust and, internationally, the European Pond Conservation Network. These organisations bring together researchers and practitioners to help conserve pond biodiversity. Their work has revealed that ponds are biodiversity hotspots in the landscape, disproportionately rich in species when compared to rivers, streams and lakes and home to many rare specialists, such as fairy and tadpole shrimps.

Ponds benefit humans by slowing down water run-off that can cause flooding and mopping up excess nutrients – a great example of what are now recognised as “small water bodies” that enrich and enliven a landscape. But, globally, ponds may also be important in influencing atmospheric carbon by storing and releasing it, given the intensity of geochemical processes and the sheer number of ponds around the world. However, just how fast ponds can bury carbon is poorly understood.

A carbon sink in your own backyard

Measuring the rate at which ponds can store carbon is tricky, primarily because the age of many ponds is unknown. To get precise measurements of carbon burial rates we exploited an unusual opportunity using some small, lowland pools whose age is known to the exact day. The ponds were dug out in 1994, at Hauxley Nature Reserve in north-east England. Their original purpose was to follow the colonisation of plants and invertebrates.

Two decades later they had accumulated a layer of sediment, dark and rich in organic debris, distinctly different to the underlying clay. We used sediment cores and dug out all of the sediment from some ponds, to measure the organic carbon that had accumulated. The amount of carbon in the cores was scaled up to the amount dug up from other ponds to reflect the total volume of sediment.

The ponds’ burial rates for organic carbon ranged from 79 to 247g per square metre per year, with a mean of 142g. These rates are high – much higher than the rates of 2-5g attributed to surrounding habitats such as woodland or grassland. Small ponds occupy a tiny proportion of the UK’s land area – scarcely 0.0006% – compared to grassland at 36% or 2.3% for ancient woodland. But the rate of carbon burial we found would result in ponds burying half as much as the vastly greater expanse of grassland.

However, the role ponds play in the carbon cycle is complicated. Some ponds may be significant sources of greenhouse gases, such as permafrost thaw ponds in the Arctic which release even more carbon as the tundras they’re found in warm. Our Hauxley ponds can switch back and forth from being a net sink to a net source of carbon as they dry out or re-flood. Nevertheless, our ponds have accumulated plenty of carbon over their 20 years and provided a home to a wealth of animals and plants.

Nothing was done to engineer carbon burial in our ponds – there was no artificial enhancement of productivity to maximise carbon capture. They are small, shallow, lowland ponds among the intensively farmed landscapes typical of much of the temperate climes. Similar ponds and tiny wetlands are dotted throughout the local landscape, primarily scraped out for wildlife conservation.

These lowland ponds are easy to create, even in a back garden. They can be small and temporary – clean water is the key – and the value of their wildlife is now firmly understood. No longer overlooked, the importance of ponds in the carbon cycle and in fighting climate change is becoming apparent.