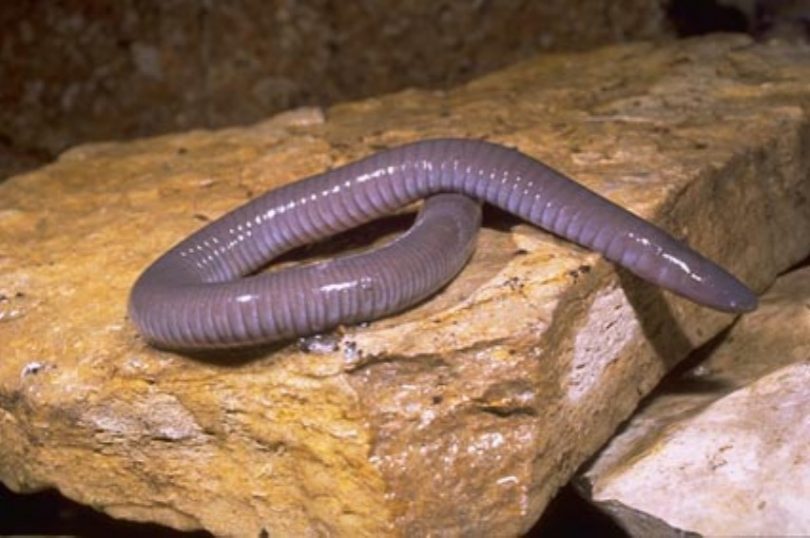 In this article, Laurence Jarvis (Head of Conservation at Froglife), takes a closer look at caecilians…

Caecilians, or blind snakes, as they are also often called, are limbless, elongate amphibians which inhabit tropical regions, with hotspots in South America and Asia (Kupfer et al., 2016; Gomes et al., 2012). Of all the groups of amphibians, caecilians are the most poorly understood, which is in part due to their secretive, fossorial lifestyle. They belong to the order Gymnophiona, one of three orders which comprises the Amphibia. There are currently 209 recognised species, which represents just 3% of the total 7,950 amphibian species worldwide (AmphibiaWeb, 2018). Caecilians are all ground-dwelling tropical amphibians which exhibit a wide range of reproductive modes, from laying eggs that hatch into aquatic larvae, to those that hatch into miniature terrestrial juveniles. Little is known of their diverse reproductive modes but in recent years research has elucidated more information on their unusual breeding ecology.

Oviparous caecilians lay eggs, which are usually laid in a small terrestrial nest (Figure 1). The females of all these species exhibit extensive parental care, guarding their clutches of eggs against predators (Gomes et al., 2012). Eggs will hatch into either free-swimming larvae, which develop in small water bodies, or terrestrial juveniles, which are independent of their parents. Ichthyophis kohtaoensis inhabits the tropical forests of northern Thailand and belongs to the second largest caecilian family. In this species, breeding coincides with the rainy season with clutches of eggs laid in damp soil at the onset of the first rains (Kupfer et al., 2004). Females lay their eggs in small chambers near to temporary and permanent ponds, pools and slow flowing brooks and rivers. This allows the free-swimming larvae to readily hatch into the water to complete their aquatic development. Research suggests that females eat little or no food during the three month incubation period, since the body condition of females attending young clutches is higher than those with older clutches (Kupfer et al., 2004). This, along with the small clutch size, indicates that there are costs to parental investment and attending eggs. In addition, there is a correlation between female body length and clutch size with older females being longer than young females (Kupfer et al., 2004). This implies that older, more experienced females, produce larger clutches and more offspring (Kupfer et al., 2004).

The ringed caecilian, Siphonops annulatus, is an unusual oviparous species inhabiting South America. The eggs hatch into poorly developed terrestrial young which feed on the skin of the female. The young possess specialised teeth which allow them to scrape skin from their mother’s back immediately after hatching (Wilkinson et al., 2008). The feeding behaviour of the young is described as being “quite frenetic with the young frequently tearing pieces of skin by spinning along their long axes and sometimes struggling over the same piece of skin” (Wilkinson et al., 2008) (Figure 2). This maternal dermatophagy is also known from a second, distantly related African caecilian species, Boulengerula taitana (Kupfer et al., 2008), which suggests that skin feeding is an ancient form of caecilian parental care and may have persisted for more than 100 million years (Wilkinson et al., 2008). In addition, Wilkinson et al. (2008) report a previously undocumented behaviour which involves the female raising herself upward, exposing her vent and releasing a clear fluid, which the young consume. This appears to be a form of feeding the young, but further studies are required to ascertain the function of this behaviour.

Viviparous caecilians, which give birth to live young, represent another unusual reproductive mode for amphibians. During development inside the female, the foetuses initially obtain their nutrition from a yolk, similar to egg-developing species. After this, the developing young feed on a uterine milk, secreted from the oviducts of the female. The young obtain this through possessing specialised embryonic teeth which they use to scrape at the oviduct wall (Gomes et al., 2012). The evolution of viviparity in caecilians is poorly understood, but since both viviparous and oviparous species possess specialised teeth for scraping (either skin or oviduct milk), this suggests that all these species evolved from a common, oviparous ancestor (Kupfer et al., 2006). Gegeneophis seshachari is the only known species of viviparous caecilian from the Indo-Seychellean region (Gower et al., 2008). In this area the rainy season is short and unpredictable such that laying eggs which hatch into offspring that rely on the presence of water or a damp environment may be highly risky. Water bodies may dry up rapidly before larvae can fully develop. Therefore, Gower et al. (2008) propose that viviparity may have evolved in this species in response to short, unpredictable rainy seasons and the lack of suitable locations to lay and incubate their eggs.

Caecilians possess interesting and unusual reproductive modes, much of which is poorly understood. In addition, many of these species are threatened or Data Deficient and in regions which are undergoing large habitat loss and fragmentation. More primary data are required to fully understand caecilian reproductive ecology and evolution, which will help inform much needed improvements in conservation assessments for these species.