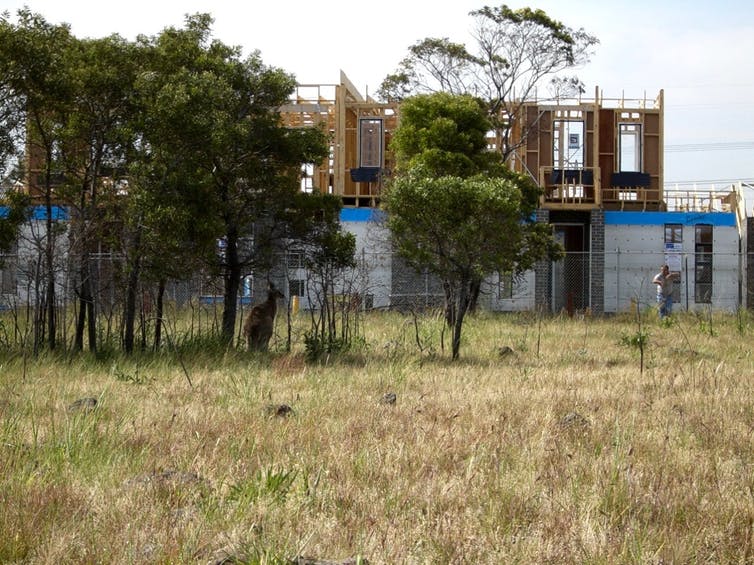 It may not look like a pristine expanse of Amazon rainforest or an African savannah, but the patch of bush at the end of the street could be one of the only places on the planet that harbour a particular species of endangered animal or plant.

Our newly published global study of the conservation value of landscapes in 27 countries across four continents has found these small patches of habitat are critical to the long-term survival of many rare and endangered species.

In Australia, our cities are home to, on average, three times as many threatened species per unit area as rural environments. This means urbanisation is one of the most destructive processes for biodiversity.

It tends to be the smaller patches of vegetation that go first, making way for a housing development, a freeway extension, or power lines. Despite government commitments to enhance the vegetation cover of urban areas and halt species extinctions, the loss of vegetation in Australian cities continues.

This story plays out all over the world day after day. Of course, it’s not just an urban story. Patches of rural vegetation are continually making way for, say, a new pivot irrigation system or a new mine to provide local jobs.

Mostly, policymakers and scientists do not consider these losses to be, on their own, a fatal blow to the biodiversity of a region or country. Small, often isolated patches of vegetation are considered expendable, tradeable, of limited ecological value due to their small size and relatively large amount of “edgy” habitat. Wrong.

Our study analysed the relationship between conservation value of vegetation patches and their size and isolation in landscapes across Europe, Australia, North America and Africa. The findings prompt a rethink of long-held views about the relative importance of small, isolated habitat patches for biodiversity conservation. We show that these patches often have unique ecological and environmental characteristics.

That’s because they are the last patches left over from extensive clearing of flat, fertile land for agriculture or urban growth close to rivers and bays. They often contain habitats for rare or endangered species that have disappeared from the rest of the landscape. This makes these small, isolated patches of habitat disproportionately important for the survival of many specie

Our study calls for a rethink of urban planning and vegetation management regulations and policies that allow small patches of vegetation to be destroyed with lower (and often zero) scrutiny. We argue that the environment is suffering a death by a thousand cuts. The existence of large conservation reserves doesn’t compensate for the small patches of habitat being destroyed or degraded because those reserves tend to contain different species to the ones being lost.

The combined impact of the loss of many small patches is massive. It’s a significant contributor to our current extinction crisis.

Why are small patches seen as dispensable?

A key variable used in decisions on vegetation-clearing applications is the size of patch being destroyed. Authorities that regulate vegetation management and approve applications are more permissive of destruction of small patches of vegetation.

This is partly due to a large body of ecological theory known as island biogeography theory and subordinate theories from metapopulation ecology and landscape ecology. These theories suggest that species richness and individual species’ population sizes depend on the degree of isolation of the patch, its size and the quality of the habitat it contains.

While it is crucial that we conserve large, intact landscapes and wilderness, the problem with conserving only large and well-connected patches of high-quality vegetation is that not all species will be conserved. This is because some species exist only in small, isolated and partially degraded habitats, such as those characteristic of urban bushlands or remnant bush in agricultural areas.

For this reason, we highlight the importance of protecting and restoring habitats in these small isolated patches. And these areas do tend to be more vulnerable to invasion by weeds or feral animals. If the impacts of invasive species are not managed, they will eventually lead to the destruction of the habitat values and the loss of the species those habitats support.

Small and isolated patches of vegetation on the urban fringe are under enormous pressure from human use, pets, escaped seed of Agapanthus and the many other invasive species we plant in our gardens. These plants spread into local bushland, where they outcompete the native plants.

Communities can make a difference

As well as these perils, being on the urban fringe also brings opportunity. If a remnant patch of vegetation at the end of the street is seen to be of national environmental importance, that presents a great opportunity to channel the energies of community groups into conserving and restoring these patches.

A patch that is actively cared for by the community will provide better habitat for species. It’s also less likely to fall foul of development aspirations or infrastructure projects. The vicious cycle of degradation and neglect of small patches of habitat can be converted into a virtuous cycle when their value is communicated and local communities get behind preserving and managing them.

Urban planners and developers can get on board too. Rather than policies that enable the loss of vegetation in urban areas, we should be looking at restoring habitats in places that have lost or are losing them. This is key to designing healthy, liveable cities as well as protecting threatened species.

Biodiversity-sensitive urban design makes more of local vegetation by complementing the natural remnant patches with similar habitat features in the built environment, while delivering health and well-being benefits to residents. Urban development should be seen as an opportunity to enhance biodiversity through restoration, instead of an inevitable driver of species loss.