Home » Counting sheep and goats in the gorge 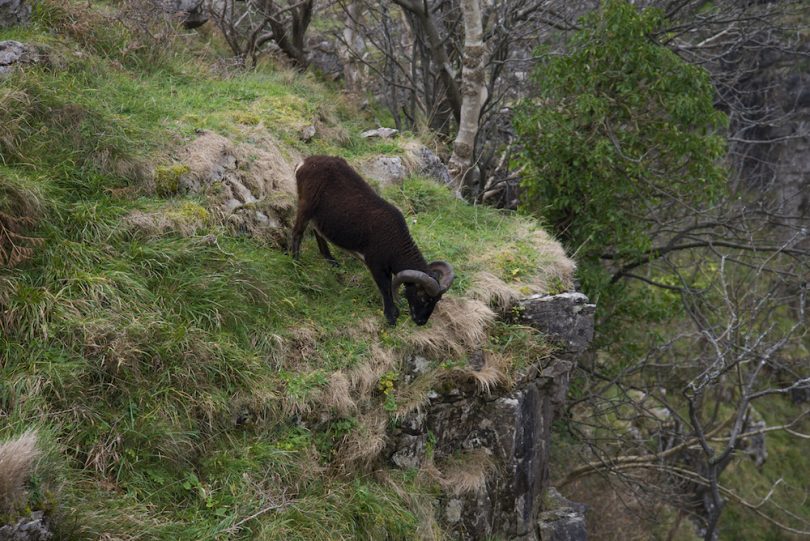 Famous for cheese, ancient skeletal remains and rock climbing, Cheddar Gorge in Somerset is also unique for a lesser-known reason, as the home to one of England’s only flocks of feral sheep. Harry Shepherd went to uncover their mystery…

Above the caves where Britain’s oldest complete skeleton was discovered, a crowd of his descendants gather on a misty autumn morning. Though what they’re doing there is a far cry from the of daily routine of the 10,000-year-old Cheddar Man.

Today’s group, made up of countryside rangers, volunteers and students, are assembled in Cheddar Gorge to count sheep. And it’s nothing to do with trying to sleep.

Every year the National Trust – led by its conservation and species expert Dr David Bullock – rounds up a group of eagle-eyed spotters to tally the feral Soay sheep and feral goats that call the gorge home. The hardy animals have an important role to play when it comes to wildlife conservation, munching on aggressive scrub and keeping it from invading the flower-rich grasslands.

But it’s also important to keep an eye on their numbers. If the populations of sheep and goats were to multiply too rapidly, they could pose a threat to various flora in the valley, including a collection of rare whitebeam trees.

Conservation
Bullock, who has been leading the count for nearly three decades, says, “The sheep and goats are excellent workers, but we need to make sure they don’t overgraze the land. By keeping the scrub in check, the animals allow for rare wild flowers to flourish, including the pride of Somerset, the Cheddar Pink.”

Once gathered, the staff and volunteers split into smaller groups and, wielding identification sheets, disperse up and down the gorge. They tread cautiously along the sides of the valley, peering over precipices in the hope of spotting groups of animals congregated together.

“The animals tend to wander in small clusters”, explains Bullock. “We’re counting them at this time of the year because it’s the rutting season and they’re often in larger groups, so its easier to find them.”

It’s a good job there are experts and binoculars in each group because, at a distance, it’s not always easy to tell the two species apart.

The history
The majority of Soays, including those at Cheddar, have chocolate coloured coats, though there’s the odd ginger in each group.

While small in stature, Soay sheep are a hardy bunch. Those found in Cheddar descend from an ancient primitive sheep breed native to the Scottish archipelago of St Kilda, a group of remote Atlantic islands forming the westernmost part of the Outer Hebrides.

They’re also intelligent, nimble animals – traits that serve them well to negotiate the steep cliffs at Cheddar – while being renowned for quirky behaviour. In England, feral Soay sheep can only be found in Cheddar, on Lundy Island in the Bristol Channel and a handful of other islands.

By contrast, feral goats are much more common and there are over 40 populations across the UK. The goats were deliberately introduced to the gorge during the 90s for conservation purposes, though how the sheep ended up there is a little more ambiguous.

The tale involves a handful of sheep being used as a stake during a game of poker. Ultimately, the animals weren’t welcome at their new home and had to go elsewhere. Or so the story goes.

Nevertheless, over the years, both the sheep and goat populations grew, becoming stewards of the gorge and looking after it ever since.

Today’s tally
After three hours of traipsing up and down the valley, the staff and volunteers on this year’s count begin to congregate. Clipboards are collected and after a little arithmetic, Bullock reads the figures out loud.

The population of sheep is essentially the same as last year, at 114 counted, though there’s an obvious absence of lambs. As the sum is based on observation, rather than herding the animals as you would with domestic sheep, there’s always a risk of double counting, or not counting at all.

Despite this caution, there’s no mistaking a huge decrease in the number of goats. Last year Bullock and co tallied over 50, whereas this year’s count barely makes half of that, at 27.

“It’s possible we missed a goat or two but even so, the population is about 50% down on last year, with the biggest losses among kids and adult billies. While that may seem shocking, it’s understandable.”

“The Beast from the East (the cold wave that swept across England early this year) must have devastated the kids born in February. It probably also saw off some of the adults on their last legs, desperately waiting for spring to arrive.”

According to Bullock, the animals tend to gamble with the weather each year. For billies this can include not feeding properly during the autumn rut – when they tend to focus on mating and little else – and relying on their reserves to get them through winter.

With some forecasters predicting the Beast from the East to return in 2019, the sheep and goats of Cheddar Gorge could be in for yet another rough ride.

About the Author: Harry Shepherd is a writer interested in wildlife conservation and wildness. He has worked with various non-profit organisations, and currently plies his trade at the Forestry Commission. Find him on Twitter at @harrysheph.