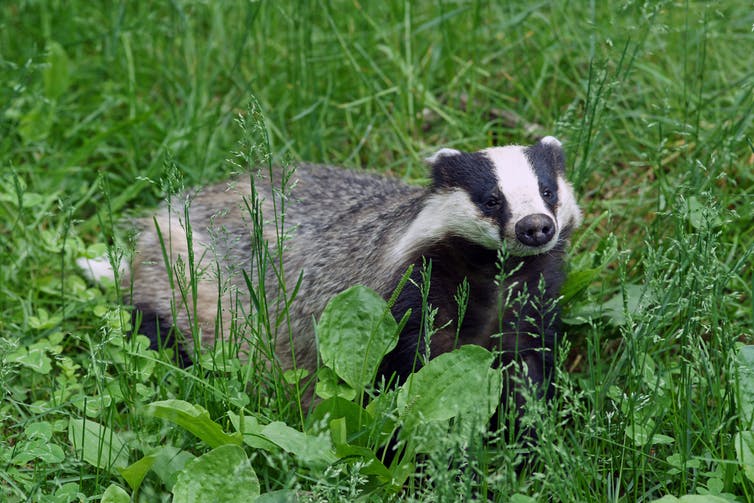 Controlling the epidemic of tuberculosis in English cattle is a hugely controversial issue. The role badgers play in that epidemic and how to prevent their infection spreading to cattle is also hotly contested.

The recent Bovine TB Strategy Review, known as the “Godfray Review”, described culling badgers as having only a “relatively modest benefit” in reducing the incidence of TB in cattle and described the use of “non-lethal” control of infection in badgers as “highly desirable”.

Culling badgers has been largely unpopular with the public, and since the report suggests it may not be an effective long-term solution, what are the non-lethal alternatives, and do they work?

There are three main approaches to reducing the risk that TB in badgers poses to cattle. We can reduce the number of badgers, reduce contact between badgers and cattle, or reduce infection among badgers.

Culling or birth control for badgers?
The idea behind culling is simply to reduce badger numbers so that the amount of badger-to-badger and badger-to-cattle transmission falls, ideally until the infection dies out among the badgers.

The largest trial of badger culling, the Randomised Badger Culling Trial, finished around ten years ago and found that culling caused both a reduction in badger numbers and of TB in cattle.

But it also found that a high proportion of the remaining badgers had TB. So once culling stops, a regrowing badger population that’s still infected might pose an even greater risk to cattle.

Early trials have suggested another way to reduce badger populations: immunocontraception. This involves vaccinating badgers against their own reproductive hormones so they can’t get pregnant. It may prove more socially acceptable than culling.

But rolling this out is some way off. As it reduces the future birth rate rather than increasing the death rate, contraception will also take longer to reduce badger populations than culling.

Biosecurity
Keeping cattle and badgers apart with physical barriers around farm buildings such as badger-proof gates and electric fences – an approach known as “biosecurity” – is relatively simple but can be expensive.

How the disease is transmitted in open environments, through slurry and soil movement or on contaminated farm vehicles, people and wildlife, is less well understood.

Vaccination
Badger vaccination requires first trapping the badgers, as it uses the same injectable vaccine, BCG, as is used in humans. It is undertaken by trained and licensed volunteers in England, thereby reducing the cost.

Oral vaccines would be easier to use but are not yet licensed. Small numbers of trials have demonstrated that vaccination reduces both the number of badgers infected and the degree of disease in badgers with only partial protection. However, unlike for culling, there have been no large-scale trials of the effect that vaccinating badgers has on TB in cattle.

Most badger vaccination in England has been undertaken in areas in front of the expanding cattle epidemic, where the badgers are believed to be free of bovine TB. This is because vaccination will protect against infection in susceptible badgers but will not stop the development of the disease in those already infected. But vaccination may still be effective at the population level among infected badgers by reducing transmission.

A recent study in Ireland found that vaccination reduced transmission enough that TB should die out among the badgers if reinfection from cattle is prevented. It will be interesting to see if vaccination on the edge of the English cattle epidemic has any effect on the expansion of the epidemic in either cattle or badgers. Determining this, however, will require more surveillance of TB in badgers than at present.

Combined solutions
In Ireland, the follow-up strategy to culling badgers appears to be vaccination, while a “test-vaccinate-remove” (TVR) approach, in which individual badgers are caught, tested and either vaccinated or killed, is being trialled in Northern Ireland and Wales.

TVR is as labour-intensive as vaccination but might reduce the numbers of infected as well as susceptible badgers. Unfortunately, the current diagnostic tests for TB in live badgers are not very sensitive, so some infected badgers will be left in the population.

The Godfray Review discusses how combined approaches to controlling TB might have bigger effects than any single approach. Vaccination plus immunocontraception, or short culls plus vaccination, all combined with better biosecurity may be the answer.

But this would require a more joined-up approach than currently exists and an agile policy, responsive to local differences and capable of changing rapidly as new evidence becomes available. And, of course, whatever approach is used to control TB in badgers, reintroduction of infection is possible if the disease is not better controlled in cattle.