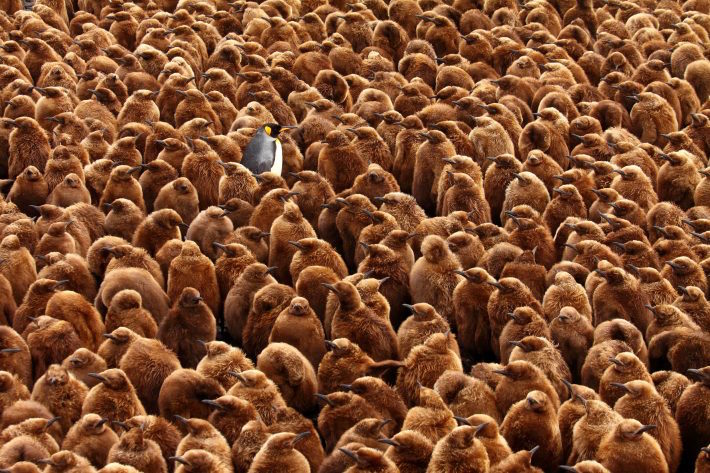 An image of a lone adult king penguin standing amongst a crowd of chicks has landed Chris Oosthuizen the first prize in the British Ecological Society’s annual photography competition, ‘Capturing Ecology’.

With images taken by international ecologists and students, this competition celebrates the diversity of ecology. Capturing flora and fauna from across the planet, subjects range from African wild dog research to an artistic take on Galapagos iguanas to images exploring the relationships between people and nature.

“Although the global population of king penguins is large, populations inhabiting islands around the Antarctic face an uncertain future. Global climate change may shift the oceanic fronts where they feed further away from breeding sites, forcing penguins to travel farther to reach their foraging grounds”, said Oosthuizen of his winning image, which was taken while spending a year on the remote Marion Island (part of the Prince Edward Islands in the sub-Antarctic) conducting research on seals and killer whales.

Professor Richard Bardgett, President of the British Ecological Society, commented: “Some images have the power to say much more than words, and Chris’s image, which showcases the remarkable colony life of an iconic bird species, raises awareness of their uncertain future due to climate change.”

Oosthuizen, a postdoctoral researcher at the University of Pretoria, also won the ‘Dynamic Ecosystems’ category with an image of a southern giant petrel preying on a king penguin chick.

The overall student winner is Adrià López Baucells, who is studying the consequences of Amazonian rainforest fragmentation on insectivorous bats as part of his PhD project at the University of Lisbon. Using a motion sensor and four flashes synchronised with the camera, Lopez-Baucells and colleague Oriol Massana managed to capture for the first time a fringe-lipped bat sneaking up on a little yellow frog of the genus Scinax.

“The high standard of submissions this year made selecting winners a big challenge. Some entries captured fleeting and intimate insights into animals’ lives, which requires technical prowess and patience to achieve. We congratulate all winners and thank all the participants for their submissions”, concluded Bardgett.

With the support of publishing partner Wiley, the winning images will be exhibited at the Society’s annual conference in Birmingham next month, which will bring together 1,200 ecologists from more than 40 countries to discuss the latest research. They will also be displayed at a free public exhibition in London, running from 21-27 January 2019. 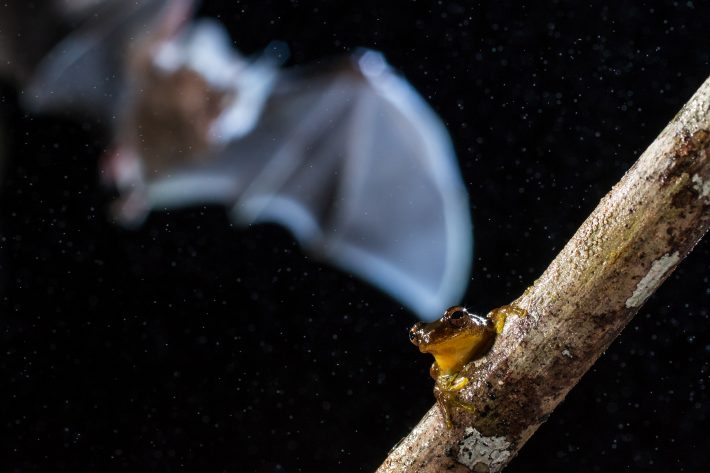 Shadows in the sky. The neotropical fringe-lipped bat (Trachops cirrhosus) is a medium-sized bat found in dry and moist forests extending from Mexico to Brazil. The species is easily identified by its prominent papilla-like projections on the lips and muzzle. This is one of the few neotropical bats known to capture and prey on vertebrate species. Actually, fringe-lipped bats are known mostly for their frog-eating habits. However, their diet is still poorly understood in the Amazon. Credit: Adrià López Baucells, University of Lisbon and the British Ecological Society

Overall student winner: Adrià López Baucells, University of Lisbon, Shadows in the sky, a fringe-lipped bat sneaking up on a little yellow frog

Category 1 – Up Close and Personal
An image displaying the intricacy of nature using close-up or macro photography.

Winner: Roberto García-Roa, University of Valencia, Web of life, a spider in Spain

Student winner: Sandra Angers-Blondin, University of Edinburgh, Fox on the hunt, a red fox in the Canadian Arctic

Category 3 – Individuals and Populations
A unique look at a species in its environment, either alone or as part of a population.

Winner: Adrià López Baucells, University of Lisbon, Flying in the rain, a Seba’s short-tailed bat in the Brazilian Amazon rainforest

Student winner: Adrià López Baucells, University of Lisbon, Climbing in the tropics, an anteater in the Brazilian Amazon rainforest

Category 4 – People and Nature
An interesting and original take on the relationships between people and nature.

Student winner: Mathilde Le Moullec, Norwegian University of Science and Technology,
Can you feel the harsh climate of the high Arctic?, Svalbard in Norway