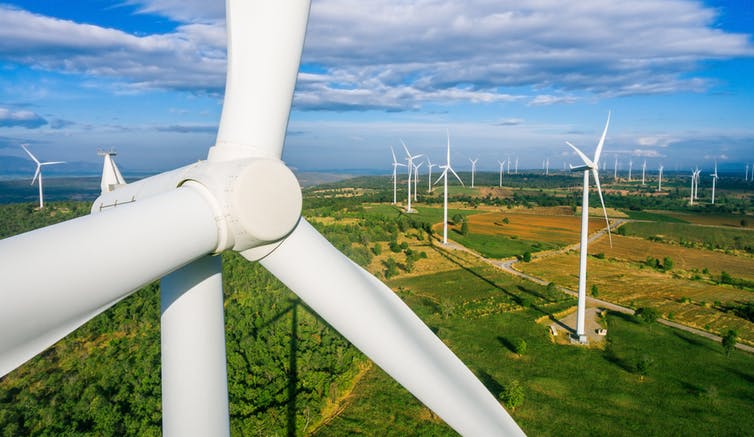 Wind turbines are, it appears, everywhere. Even if you can’t see some on the horizon on your way into work every day, it is hard to miss the continual news coverage of new developments. Clearly, efforts to move away from fossil fuels are – at least in part – working, and from the perspective of combating climate change, this must surely be a good thing.

However, much of the news coverage of turbines highlights negatives such as a perceived degradation of the landscape, or their impacts on wildlife. There is good cause for concern in this regard, particularly with respect to wildlife.

Reams of published scientific papers show that birds and bats can be killed (sometimes in relatively large numbers) by colliding with the spinning blades. Clearly, where turbines are poorly placed or where rare or vulnerable species are affected, this is a problem. Images of dead birds of prey or rare vagrant birds under wind turbines are easily turned into emotive and sensational news stories, and are terrible PR for the wind industry.

At first glance, a new study published in Nature Ecology & Evolution appears to add to the evidence of widespread lethal effects. The authors, a team based at the Indian Institute of Science and led by Maria Thaker, make the attention-grabbing observation that the effects of wind turbines are “akin to adding an apex predator to natural communities”. Apex predators are animals right at the top of their food chains, like killer whales or tigers. Adding an “apex predator” surely means that these man-made metal mincing-machines kill off birds and bats in large numbers, right?

While it certainly is true that collision with turbines can cause direct mortality, what the new research actually shows is far more interesting and complex than this. The result of many years of data collection, the work shows that through the (direct or indirect) effects on birds of prey, wind turbines can have broader and more subtle effects on the wider ecosystem – including on some unexpected species.

Specifically, they looked at a lizard that lives only in the Western Ghats mountains of India, the superb fan-throated lizard (Sarada superba). They found that the number of lizards was considerably higher in areas with turbines installed compared to otherwise similar areas without turbines.

In areas with turbines, they also found fewer birds of prey such as buzzards and kites (the lizards’ main predators), and a lower frequency of attacks on lizards. Putting the two together, the authors propose that the presence of turbines is associated with lower predator activity, and thus higher prey numbers.

In some ways, it may indeed seem as if wind turbines act similarly to the introduction of an “apex predator” into the food chain: by reducing the number and activity of intermediate predators such as birds of prey, predation pressure on smaller animals may be reduced. However, it is of course important to stress that almost all biological predators are, in the end, limited by the availability of prey. By contrast, turbines are not limited in this way and will continue to be present regardless of whether their “prey” goes locally extinct.

Perhaps more important is the non-lethal effects on the wider ecosystem that is highlighted by Thaker and colleagues. By reducing predation or reducing the activity of predators, the physiology, behaviour and population density of prey populations can be changed in unpredictable and subtle ways.

Looking beyond the collision casualties

What this work really highlights is that wind farms can have effects that are indirect or not immediately visible. This poses a huge challenge for impact assessments and survey work. Perhaps understandably, many assessments of wind turbines focus on vulnerable species, which tend to be the birds and bats most at risk of direct collision. Similarly, where carried out, post-construction monitoring often focuses on collision casualties. These are things that can be directly measured or counted, over clearly defined periods.

By contrast, assessing the longer-term effects on indirectly impacted species such as lizards takes a lot more time and money. Unfortunately, this luxury is typically not available for commercial impact assessment studies. What is more, it is likely to be significantly harder to convince regulators that impact assessments should be broadened to consider wider ecosystems, particularly where these cannot be immediately seen or counted as dead animals.

At least in the UK, there is some evidence that consideration of such “synergistic” effects of developments is now increasingly expected in impact assessments. While this is encouraging, more work along the lines of study by Thaker and colleagues is needed to build up a better understanding of the extent and importance of similar effects in different areas. From a pragmatic perspective, it may well be that in the future impact assessments will move away from focusing on direct collision mortality and towards more targeted and in-depth assessments of “downstream” ecological impacts.