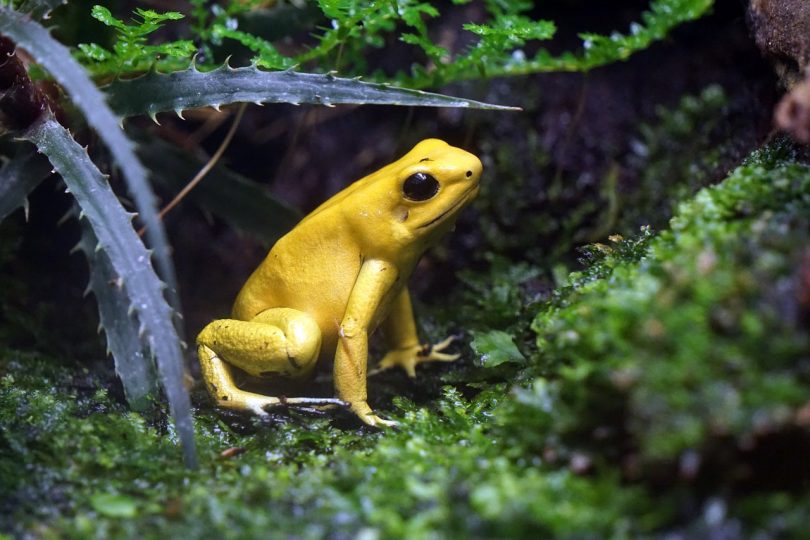 In this article, Laurence Jarvis (Head of Conservation at Froglife), takes a closer look at toxicity in amphibians…

Frogs, toads and salamanders have long been considered to be noxious and a large range of amphibian species have been found to secrete toxic chemicals from their skin. Over recent decades the type and mode of action of these chemicals has been characterised from many amphibian species. Toads of the genus Bufo, for example the common toad (Bufo bufo), are able to synthesise and store a host of chemicals, some of which are known as steroidal bufadienolides (Daly, 1998). These are a type of cardiac glycoside and specifically block nerve action in the heart, resulting in irregular or slow heartbeat, rapid heartbeat and possibly lethal cardiac arrest in their predators. Leptodactylid frogs, which includes a diverse range of species from the Neotropics, harbour phenolic amines in their skin, which are toxic to a range of vertebrate predators. Another class of amphibian toxins are the tetrodotoxins (TTX), which were originally discovered in newts of the family Salamandridae, specifically of the genus Taricha. The rough-skinned newt (Taricha granulosa) of North America is the most toxic salamander in this region and is considered harmful to humans (AmphibiaWeb, 2014) (Figure 1). This species, along with others in the Salamandridae family, such as Triturus newts (e.g. great crested and Italian crested newts) from Europe, contain tetrodotoxin in their skin, which is a potent neurotoxin and is a sodium channel blocker. This means that it inhibits the firing of action potentials in neurons and prevents the nervous system from carrying messages and thus muscles from flexing (Bane et al., 2014). Some of the most well documented species of frog containing skin toxins are the poison dart frogs of South America. Unlike Bufo toads or salamanders, which synthesise their own toxins, poison dart frogs accumulate toxic lipophilic alkaloids from their food sources, which may be small arthropods, such as mites, ants, springtails, and flies (Daly, 1998). 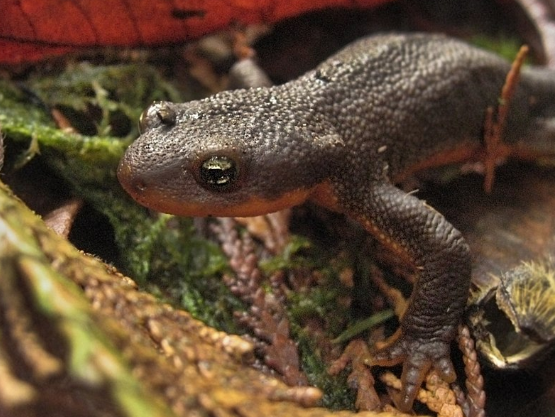 Figure 1. The rough-skinned newt of North America secretes highly toxic tetrodotoxins from its skin which is harmful to humans. [Photo credit: By Chuck Spidell – Imported from 500px (archived version) by the Archive Team. (detail page), CC BY 3.0, https://commons.wikimedia.org/w/index.php?curid=72144165]

The production of skin toxins that have been derived from arthropod prey remains a source of scientific interest and research. The occurrence of alkaloid toxins in different populations and species of poison frogs provides information as to the distribution and availability of the arthropods that provide alkaloids to them. For example, if a species of the bufonid in the genus Melanophryniscus at a particular site do not have alkaloids that are known to be from a certain group of arthropods, then that mite, ant, beetle, or millipede is either not present or not eaten by the toad. Recent research by Daly et al. (2007) investigated the profile of alkaloid skin toxins from different populations of Melanophryniscus toads from Uruguay and Argentina (Figure 2). Daly et al. (2007) found that the nature and availability of dietary sources of alkaloids found in the skin of these toads is strongly dependent on the site of collection and can change with time. This is likely to have a strong impact on the toxicity of the skin toxins produced by individual toads and thus have implications for predator defence. A change or drop in the number of a prey species of alkaloid-producing arthropod is therefore likely to have knock-on impacts for frog chemical defence. Such research highlights the importance of the interconnectedness of species groups and maintaining overall biodiversity in protected areas. 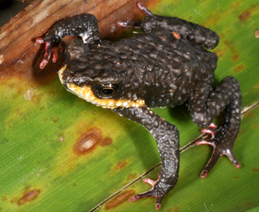 Toxins, such as those secreted from a frog, toad or salamander, are only likely to be effective if they have immediate effects on their predator. Small molecules such as alkaloids or steroids are rapidly absorbed across cell membranes, even if the predator’s skin is not punctured. This results in immediate effect in the predator such as distastefulness or pain. However, many frog species secrete large molecule toxins such as peptides or small proteins that makes them unsuitable for fast absorption (Nelson et al., 2014). Therefore, the poisons of many frogs seem to be unsuitable for fast toxin uptake by predators and to have any deterrent effect. However, as well as secreting toxins, the skin of many amphibians also contains antimicrobial peptides (AMPs), which are a defence strategy against a range of bacteria and fungi. Until recently, it was thought that AMPs were used only to fight off bacterial infections, which would otherwise infect a frog’s skin. However, recent research by Raaymakers et al. (2017) suggests that these AMPs may actually also be used to facilitate the uptake of toxins into predators and increase the speed of action. They found that in frogs which secrete large molecule peptide toxins, the uptake into predators was increased in the presence of AMPs. This highlights the complex role that frog skin chemicals play in anti-predator defence.

Most salamander species lack toxic skin secretions, but contain other active compounds such as norepinephrine, steroids, enzymes, and antimicrobial or anti-fungal substances (Daly, 1998). Many may also produce adhesives for defence (Evans & Brodie, 1994). For example, once attacked by a predatory snake, the California slender salamander (Batrachoseps attenuates) grasps the snake, loops its tail around the snake’s head and coats the predator with a sticky viscous fluid (Arnold, 1982). The adhesives in the secretion harden within seconds upon exposure to air and immobilise the snake immediately (Arnold, 1982). The salamander then escapes and the snake is unable to free itself for up to 48 hours (Arnold, 1982). There is a great deal of interest in natural adhesives for human engineering and nanotechnology (Von Byern et al., 2017) and in creating mimics which can be produced commercially. In a set of experiments using several salamanders, Von Byern et al. (2017) found that some salamanders also produced toxic chemicals which augmented the effect of the adhesives. In addition, two salamander species, the northern slimy salamander (Plethodon glutinosus) and spotted salamander (Ambystoma maculatum) from North America produced adhesives, which have the potential to be mimicked commercially and used in nanotechnology products. These findings highlight the importance of understanding skin chemicals in amphibians and the potential use in pharmacology and nanotechnology. 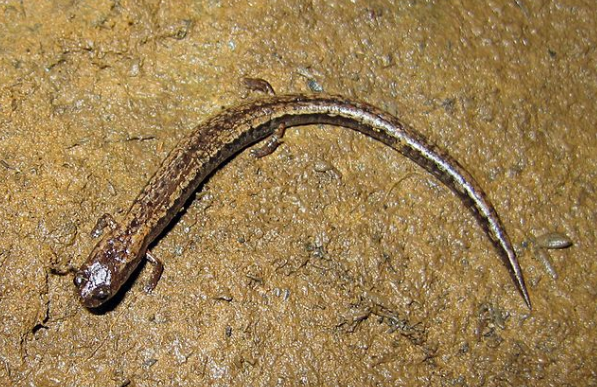