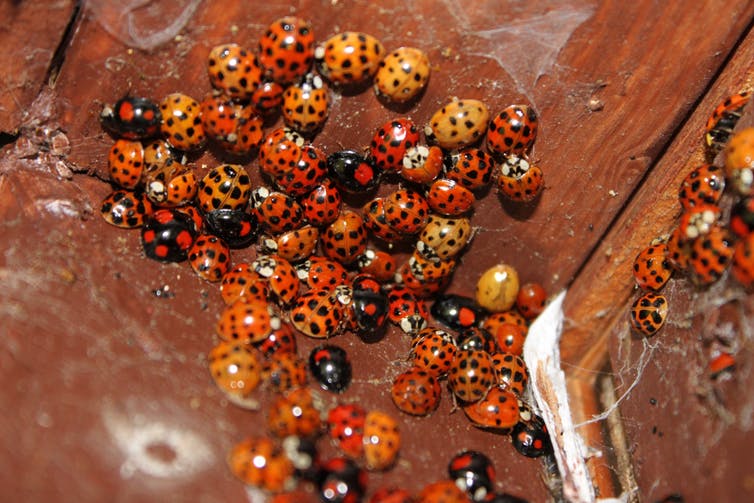 A long, hot summer has brought swarms of ladybirds into British homes, and recent reports that these colourful beetles are STI-carrying cannibals may well have worried homeowners. Yet despite their unusually large numbers, both experts and organisations say that the beetles gathering in homes are nothing to be alarmed about. In fact, the simple explanation for their behaviour is that it’s just ladybirds being ladybirds.

One persistent myth from recent headlines insists that ladybirds are cannibals. While the UK is home to 47 species of ladybirds, about 90% of them eat aphids and scale insects. While some species of native ladybirds, like the Eyed ladybird and the seven-spot ladybird will eat the eggs and larvae of other ladybird species, it happens only when their food sources are low. The process is known as intraguild predation. Only the invasive harlequin ladybird tends to take part in this more often as it has a larger appetite than other species.

But the explanation for the staggering number of ladybirds is also a simple one. With the weather growing colder in the UK, many ladybirds are searching for a place to spend their winters. The beetles become dormant in the winter months in a process known as “overwintering”, so it is essential for them to choose a spot to spend their winters near their usual habitats, often in leaf litter, low shrubs, and the crevices of tree bark. Some species, like the two-spot ladybird and the harlequin, prefer to overwinter in houses, attics, and sheds. Often, these overwintering groups of ladybirds can gather in large numbers, sometimes into the thousands.

Some of these overwintering sites can be visited by ladybirds every year. Some believe that when ladybirds gather in these sites they release an aggregation pheromone, specific for overwintering, which remains as a marker for ladybirds the following year. When ladybirds overwinter, it is one of the few times that they are in very close contact with each other. The other time is when ladybirds mate in the spring and summer.

It is because of their close contact during mating that recent headlines have reported that overwintering beetles are carrying an STI-like disease. As with any animal, ladybirds can suffer from disease, but residents have no need to be concerned about their own health. One such disease is an STI-like fungal infection called Hesperomyces virescens, which is only transferred when ladybirds are in close contact with each other, during overwintering or mating. Ladybirds with this infection do not die from it but may have a shorter lifespan or a reduced ability to produce as many eggs as normal. The good news though is that it’s impossible for humans to catch this infection as it’s specific only to ladybirds.

Apart from the inconvenience of having swarms of ladybirds gathered in doorways or windows that are regularly used, overwintering ladybirds pose no threat to people. If homeowners need to remove the ladybirds, it’s best to brush them gently into a box and place them in a shed or outhouse. If people would like to prevent future gatherings of overwintering ladybirds, they can wash the affected area once the ladybirds have moved in the spring as this may reduce numbers the following year.

While there is nothing out of the ordinary with species of ladybirds gathering in homes, it’s still too early for experts to say why there are so many gathering indoors this year alone. As British homeowners have taken to social media to voice their grievances about ladybird populations, scientists are also urging residents to use apps like iRecord Ladybirds to help them gather information. This will help scientists learn more about how the UK’s ladybird population is being affected by global climate change, and the impact that this could have on our ecosystem.

Header image: Sometimes thousands of ladybirds will ‘overwinter’ in the same spot, which experts say is normal behaviour and nothing for homeowners to be alarmed about. Credit: David Lovejoy, Author provided.