Home » Frogs and toads at the coast – salt tolerance in amphibians 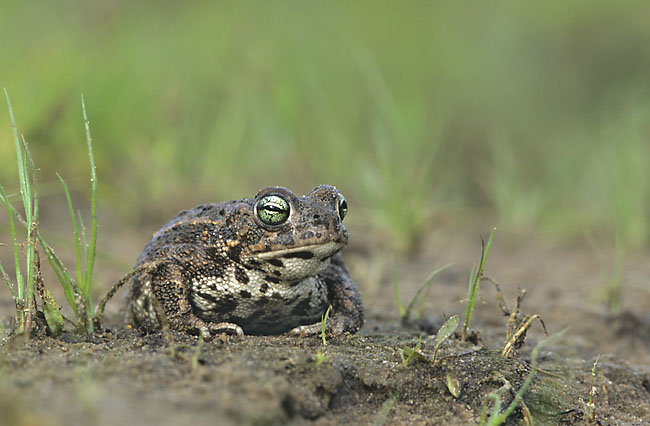 In this article, Laurence Jarvis (Head of Conservation at Froglife), takes a closer look at salt tolerance in amphibians…

It is generally understood that amphibians breed and associate with freshwater habitats such as ponds, lakes and other small waterbodies. Many scientific studies have demonstrated that amphibians are particularly vulnerable to saline conditions at embryo, larval and adult stages. The most vulnerable life stage is the embryo, which often experience high mortality when in salt environments (e.g. Beebee, 1985; Hua & Pierce, 2013). This is because salt water tends to disrupt the ionic and water exchange across permeable membranes. However, an increasing number of studies have found amphibian species that are able to adapt to and tolerate salt water habitats, especially those in coastal marshes. In his observations of the lack of amphibians on islands and in saline habitats, Charles Darwin in 1872 noted that only “one Indian species” was able to tolerate salt water (Darwin, 1872 in Hopkins & Brodie, 2015). Since then a range of scientific observations and studies have vastly increased our knowledge of the number of amphibians that are able to tolerate salt water in the natural environment. In a recent review of all scientific studies relating to amphibians and their ability to resist salt water, Hopkins and Brodie (2015) identified 144 amphibian species from 28 amphibian families across the world from anurans (frogs and toads), salamanders and caecilians that are able to inhabit salt habitats. Salt tolerance in amphibians has been recorded from all continents except Antarctica.

The majority of studies which have found amphibians in salt water habitats have recorded them from coastal areas, which get flooded predictably by sea water. For example, mangrove swamps are flooded daily by tidal fluctuations which results in predictable levels of salt water in surrounding standing water. The most well-known frog to inhabit such environments is the crab-eating frog (Fejervarya cancrivora) of southeast Asia (Figure 1). This unique species can live in freshwater as well as 75% seawater and can adapt from one to the other in a matter of hours (Ren et al., 2010). It is able to achieve this by rapidly changing levels of urea in its body tissues, which avoids excessive water loss through the skin in salty conditions (Ren et al., 2010). In addition, it has three glands within its skin: mucous glands, mixed glands, and vacuolated glands, which help buffer the additional salt which would otherwise enter its body (Amphibiaweb, 2018). Other studies on amphibians that are able to tolerate salt water environments have also noted similar changes in physiology. 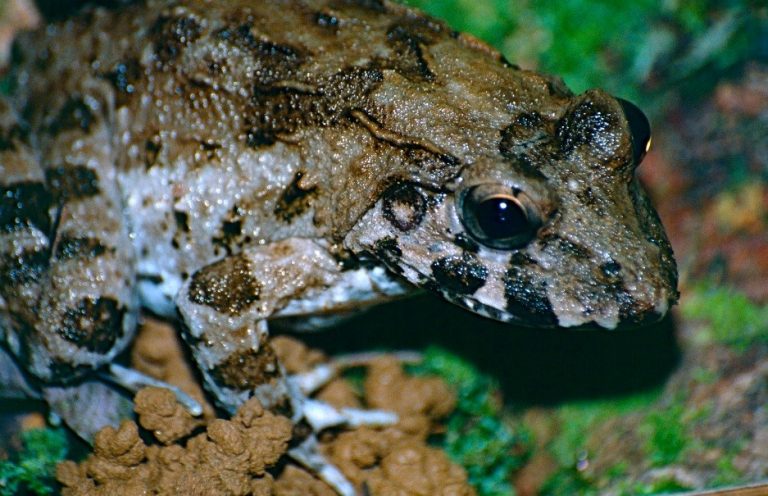 The exact mechanisms behind the evolution of salt tolerance in amphibians is still under debate but may be due to a number of genetic variables. All amphibians have highly permeable skin, which is prone to desiccation. Most amphibians are efficient at water regulation through their skin and retaining salts through effective transport of sodium and chlorine ions. Therefore, there may be a genetic predisposition to adapting to salt water environments through altering the physiology of ion transfer across the skin. Several amphibian species that are tolerant of highly arid conditions are also able to resist salt environments. The green toad (Bufotes viridis) of Central Europe is able to tolerate extremely high temperatures of 40°C and withstand up to 50% body water loss (Amphibiaweb, 2018) (Figure 2). It aestivates (hibernates) during the hottest summer months and has the same adaptations to avoiding water loss as species which inhabit saline environments, i.e. accumulation of urea in body tissues. The same occurs in the tiger salamander (Ambystoma tigrinum) of North America, which uses a similar physiological mechanism to inhabit saline habitats. Some biologists have therefore proposed that the ability to tolerate saline environments has evolved through a pre-adaptation to living in arid environments. However, this does not appear to be the case for all amphibians inhabiting salt water. The natterjack toad (Epidalea calamita) is known to inhabit both freshwater and brackish habitats both in the UK and across northern Europe (Beebee, 1985; Gomez-Mestre & Tejedo, 2005) (Figure 3). Through genetic studies, Gomez-Mestre & Tejedo (2005) found no support for this hypothesis and suggested that salt and aridity tolerance has evolved independently. They conclude that the mechanisms for resisting salt are fundamentally different in embryos and larvae compared to juveniles and adults. Therefore, amphibians which are able to resist salt whilst in the embryonic or larval stages, require unique physiology which has not evolved in arid tolerant species (Gomez-Mestre & Tejedo, 2005). Other theories for the evolution of salt tolerance in amphibians are selection pressures from freshwater predators, forcing amphibians into new habitats or diversification of amphibians into new habitats to allow them to utilise unique prey (Hopkins & Brodie, 2015). 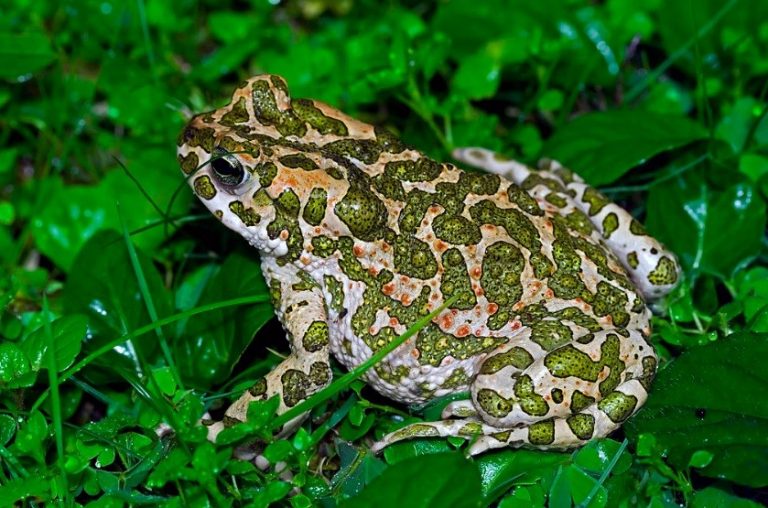 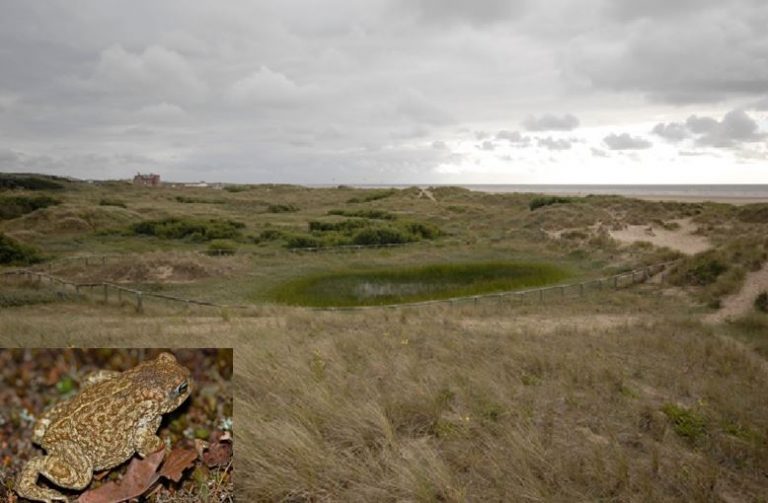 In Australia, many amphibian species are threatened with a range of anthropogenic factors including habitat loss, fragmentation and pollution. Salinization of freshwater habitats has been cited as being one of the factors in causing declines of Australian amphibian species but evidence is lacking (Kearney et al., 2012). In experimental studies, Kearney et al. (2012) examined the effects of elevated salinity on growth, metamorphosis and survival of the tadpoles of three species of native Australian frog. Kearney et al. (2012) found that tadpoles of the green and golden bell frog (Litoria aurea) raised in salt conditions had higher survival than those in freshwater. In contrast, a number of studies on other anuran larvae have found that larvae suffered abnormalities when raised in saline conditions. The authors propose that L. aurea has adapted to salt water by rapidly increasing development when in these conditions to avoid the potentially harmful effects of salt. However, other amphibians native to Australia such as the spotted grass frog (Limnodynastes tasmaniensis) and the painted burrowing frog (Neobatrachus sudelli) are unable to exhibit such plasticity in development and consequently are negatively affected by increases in salt water in the environment (Kearney et al., 2012).

Overall, it appears that an increasing number of amphibian species are being recognised as being able to tolerate salt water in the natural environment. However, species vary hugely in their tolerance of salt water habitats and our knowledge of the degree to which amphibians have adapted to salt water is poorly understood, especially those in human dominated habitats. Further in-depth investigations are required to increase our understanding of the mechanisms behind the evolution of salt tolerance in amphibians and their response in a potentially changing environment.

First posted on www.froglife.org on 28 September 2018.