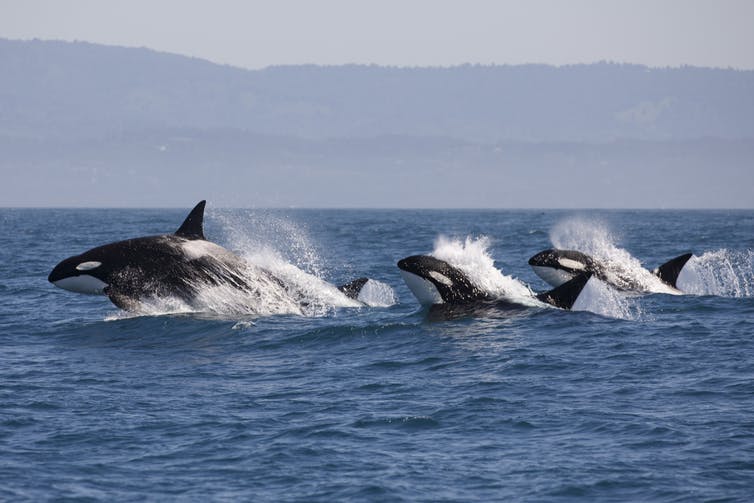 More than half of the world’s killer whales are threatened by a group of toxic industrial chemicals that accumulate in their blubber and can be passed on from mother to calf. That’s according to a new study led by scientists in Denmark and published in the journal Science. Killer whale populations found in the most polluted seas around Japan, Brazil, the UK or in the northeast Pacific, the authors report, are “tending toward complete collapse”.

Polychlorinated biphenyls (PCBs) are a ghost from the past. These chemicals were produced in immense quantities from the 1930s onwards and were broadly phased out in the 1970s/1980s as environmental concerns grew.

As they were very stable and were unable to conduct an electrical current (and therefore excellent insulators), they were mainly used in the electrical supply industry. These same properties also saw them being used in a whole array of miscellaneous applications including as sealants and additives in construction.

It is this chemical stability that means PCBs stubbornly refuse to degrade in the environment and I have spent the past 25 years studying how these and other contaminants end up accumulating in the Arctic, for instance. However, there are two other properties that make these particular chemicals uniquely problematic, unlike, say, common air pollutants or most heavy metals.

The first is that PCBs are semi-volatile, which means that over time they can evaporate into the atmosphere but then later deposit on surfaces when encountering cooler temperatures or with rainfall or attached to particles. Over decades this continued evaporation and deposition (termed “cycling”) has ensured that they’re smeared around the entire planet. PCBs are just as likely to be found deep in the ocean or in Arctic snow as they are in neighbourhood soils, although the concentrations in soil close to “primary sources” such as cities may be orders of magnitude higher.

The second problem is that PCBs tend to work their way up the food web, accumulating in ever higher concentrations as tiny animals (and their unwanted chemicals) are eaten by small animals, who are eaten by larger animals (who take on those same chemicals), and so on. This process of “biomagnification” is most evident in marine food webs where fatty tissue like blubber (a home for PCBs) is an important feature of animals at the top of the food web such as killer whales.

So, if the chemicals were largely phased out in the early 1980s, why are they continuing to cause a problem? It’s true that background concentrations have declined over the past 20 years or so, based on measurements of PCBs in the air in animals such as seabirds and even in human breastmilk. But the trend varies from place to place and between different species, and there is evidence that climate change is disturbing the “cycling” of these chemicals, potentially slowing the rate of environmental decline.

Furthermore, complex foodwebs in northern oceans, particularly around Europe and North America (where most PCBs were produced and used) are undergoing subtle alterations. Predators like sharks, large fish or killer whales are changing their diets and exploiting new prey, which in turn alters their exposure to PCBs and other contaminants.

PCBs are here for some time to come

What can be done? Unfortunately, the horse has bolted as such and it would implausible to remove “background levels” of PCBs from the world’s oceans.

The key objective now is to maintain surveillance of these chemicals, whether they be in air, water, soil or animals. In most developed countries, end-of-life action ensures that old industrial materials with PCBs are subject to high temperature incineration (an effective way of ensuring complete destruction). Similarly, grossly contaminated industrial sites or dumps are subject to expensive clean-up and incineration activities.

But, while this is effective and safe at a local level, such measures will account for only a very small fraction of the total PCB inventory, most of which is out in the wild. International efforts by organisations like the UN Environment Programme (UNEP) are ensuring that member states are undertaking “stocktaking” activities, containing old storage or dump sites, and undertaking monitoring programmes. This is particularly important across parts of Asia and key states of the former Soviet Union, where PCB production and use was also high.

The legacy of PCBs will continue to haunt us for some while to come. Scientists estimate that the final resting place or “sink” for PCBs is likely to be organic rich soils across the Northern Hemisphere or even ocean sediments. However, in the meantime, PCBs continue to cycle around the environment and are still present in mother’s milk. Maternal transfer from adult female to calf is the key exposure route for most marine mammals and this chemical stress (supplemented by an array of chemical pollutants other than PCBs), alongside climate change induced stress, is a major concern.