Home » Yellowhammer: the Brexit bird with a story to tell about the EU 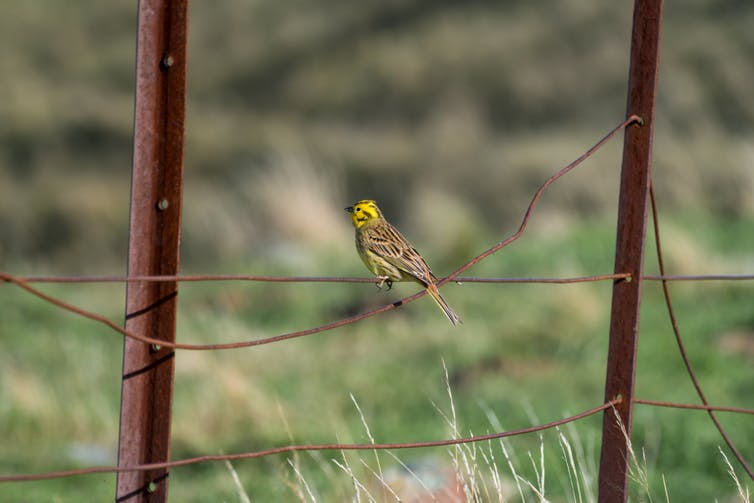 A little bit of bread and no cheese.

This short phrase may conjure bucolic scenes of the British summertime in your head, or it may just remind you of what you need to grab from the shops on your way home.

If you fall into the former camp, you’re probably familiar with the song of the yellowhammer, a sparrow-sized bird recently thrust into our news cycle as the namesake of the Brexit no-deal contingency plan – “Operation Yellowhammer”.

The yellowhammer’s tune is believed to sound like someone saying “A little bit of bread and no cheese”. When naming their preparations for stockpiling food and other essentials, the UK government evoked the yellowhammer’s report of a bare kitchen cupboard.

But there’s more to the yellowhammer than the tune it sings. The fortunes of this plucky bird have their own complicated history with the EU.

Yellowhammers (Emberiza citronella) are found in open habitats, particularly heathland and agricultural landscapes scattered with hedgerows throughout the UK and Europe.

They are a species of “bunting”, a seed-eating group of birds restricted to Europe, Africa and Asia. Recently, however, they were found to be more closely related to the sparrows and tanagers of the Americas than the sparrows and finches of Europe that they visibly resemble.

The common name “yellowhammer”, or “yellow yorlin” as traditionally known in Scotland, refers to the male of the species, with its gaudy, canary yellow head and upper breast set against its brown-streaked body.

By comparison, the female sports a rather drab off-yellow head and breast. Males are particularly noticeable during the spring and summer because of the stamina with which they sing their nasal songs, from the tops of small bushes and trees.

Their conspicuousness explains the yellowhammer’s place in the folklore of rural idylls, inspiring poems by Thomas Hardy and Robbie Burns. In “Rural the place, with cart ruts by dyke side”, the poet John Clare wrote of the habits of the yellowhammer:

Close to a hill of ants where Cowslips bloom

The Yellowhammer, trailing grass will come,

To fix a place and choose an early home,

With Yellow breast and head of solid gold.

As John Clare noted, yellowhammers begin nest building in early April, laying their eggs in nests low to or on the ground between mid-April and July. Their clutches are small – typically three to four eggs which vary in colour from light blue to reddish-brown. The surface of these eggs is covered by fine, ink-like squiggles, earning the bird another traditional name: “scribble lark”.

Yellowhammers are resident in the UK, although they disperse away from breeding territories in the autumn and winter where they frequently form large flocks with other ground feeding birds in search of seed.

Despite this, British birds are generally quite sedentary. Roughly 70% of British yellowhammers spend winter in habitats within five kilometres of their breeding territories. Adult yellowhammers typically live for three years, although research on individually marked birds has found the oldest to reach the impressive age of nearly 12 years old.

Yellowhammers and the EU

The simple, wheezing song of the yellowhammer has frequently cropped up in popular culture, even being credited with inspiring the opening “Fate at the door” motifs of Beethoven’s 5th Symphony. While Enid Blyton popularised the mnemonic “A little bit of bread and no cheese” as a familiar sound of the British countryside in her books and poems, it has in recent decades become notable by its absence.

Yellowhammers are “red-listed” as a species of the highest conservation concern in the UK, as populations have declined by over 50% since the mid-1980s. Like many farmland birds, their decline is attributed to intensive farming practices brought about under the EU’s Common Agricultural Policy (CAP), which prioritised making the land as productive as possible.

For example, a switch from spring to autumn crop sowing has reduced seed-rich foraging habitats that yellowhammers need to survive the winter, significantly affecting local populations.

However, a reform of the CAP in the mid-2000s brought in environmental stewardship schemes, which sought to restore and protect important habitats through environmentally sensitive farming. These schemes remain an important part of the UK’s efforts to halt the decline of farmland birds like yellowhammers.

Agricultural subsidies, on a level with the CAP, have been guaranteed post-Brexit until 2022. However, it was recently announced that these payments will face a major shake-up from 2021, including a shift to prioritising habitat for wildlife and improved flood defences over the quantity of land farmed.

Many have hailed this plan for ensuring that environmental protection in agriculture remains as part of a “green Brexit”, although as yet the amount of money farmers will receive from the public purse remains undisclosed.

Only time will tell, then, if Brexit spells fate at the door, or leaving with a little bit of bread, but no cheese for yellowhammers and beyond.

As nature’s poesy and pastoral spells —

They are the yellowhammer’s and she dwells

Most poet-like where brooks and flowery weeds

As sweet as Castaly to fancy seems

On which her partner haply sits and dreams

O’er all her joys of song—so leave it still

A happy home of sunshine, flowers and streams.

– The Yellowhammer’s Nest by John Clare.