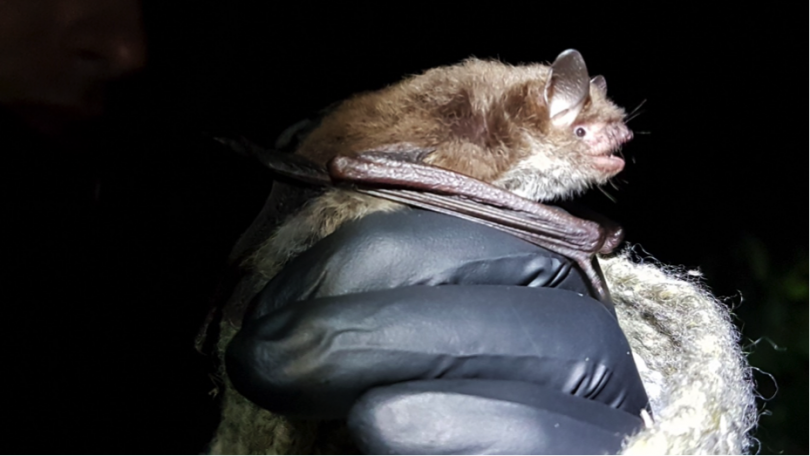 In the latest installment of the Urban Bat Project, Morgan Hughes and the team have been finding out the speed of a flying bat…

The bat maternity season certainly hasn’t kept us quiet on the Urban Bat Project Team, and now that the summer hiatus is over we can take a breath and look back at the summer’s fieldwork. This has largely consisted of preparing for and then undertaking surveys along linear features, looking for evidence of which bat species are using which types of features to commute from their day roosts to their night feeding grounds.

This has been made possible by Wildlife Acoustics Inc., from whom we have been awarded a Scientific Product Grant in the form of eight Echo Meter Touch 2 Pro (EMT2Pro) bat detectors for Android. I had designed the survey to utilise these detectors because they are full-spectrum, user-friendly and would enable us to have GPS-tagged and time-stamped data. The idea is to spread out teams of recorders along a linear feature and (using both sound analysis and field observations) ‘follow’ the movement of individual bats as they passed each survey team.

The survey team prior to the first Activity Survey (Credit: Morgan Hughes)

The survey has not been without its problems, and we have had to undergo a good deal of trouble-shooting, but I’m now delighted to say that all the kinks are ironed out and we’re gathering some useful data. Initially, we had some issues with the time stamps on the files, because although everyone using the EMT2Pro units on their phones had a data package and their phone was set to ‘auto update’ their time, the difference in time between any two phones could be out by up to 5 or 6 seconds. This is enough of a discrepancy to skew my data, and we had to find a workaround: we downloaded an app called ClockSync to see how far out each of our phones was from the Atomic Clock and (as suspected) there was a huge variation. Now we use the ClockSync app to manually calibrate our phones/tablets prior to the survey to within 0.5 seconds.

But having accurate GPS and time-stamps on our sound files was useless unless we knew how long it would take for a bat to fly between survey points. Published results on bat flight speeds vary greatly between species and geographical area. Bats are known to fly at their top speeds whilst commuting, and then at their most efficient speeds whilst feeding, so I could expect that bats commuting at emergence time along a straight section of canal would be flying at close to their top speed, but this was just an assumption. I needed to know the facts or my data would be useless. The Bats And The Millennium project in Scotland measured the speed of Daubenton’s bats along canals as having an average speed of 5.3 metres per second (MPS). Was this a good analog for my bats along this particular stretch of canal? I had no fancy equipment like lasers or radio tags to find out, so I decided to test it out in a rather old-school way…

I positioned 6 surveyors at 20m intervals along a straight stretch of canal, covering exactly 100m. Each surveyor was equipped with an EMTouch and a torch, which were both positioned on the ground, facing the opposite bank. Surveyors 1 and 6 were equipped with stopwatches and walkie talkies. Stopwatches were synchronised and started. When a bat passed through Surveyor 1’s torch beam, their stopwatch was stopped and the surveyor called out ‘bat’. As each subsequent surveyor observed the bat fly through their torch beam, they also called ‘bat’, and the final surveyor (alerted to the incoming bat by the calls from other surveyors) stopped their stopwatch as soon as the bat passed them. We repeated this numerous times until we came up with an average speed: 4.9 mps! This was pleasingly close to the BATM study figures, and I took the data home to see if I could ‘find’ passing bats in my (now-corrected) time-stamped sound files…

…and it works. The green cells you can see in the spreadsheet above represent calls of Daubenton’s bats as they passed survey points Golf, Foxtrot and Echo – heading north at almost exactly 4.9mps. The distance between the survey points was measured, giving me estimated time factors, so that I would know what time stamp in the recordings to look for when searching for the travelling bat.

It is early days, and I will be repeating the survey weekly for the rest of the summer, but preliminary observations have already identified a ‘hop-off’ point from the canal to a foraging ground, and we are getting strong data about directional travel for several species. I’m super-excited about the surveys, but for now I have to dust off the harp traps because trapping season starts tomorrow! See you in a month with another update!