Home » How the land recovers from wildfires – an expert’s view 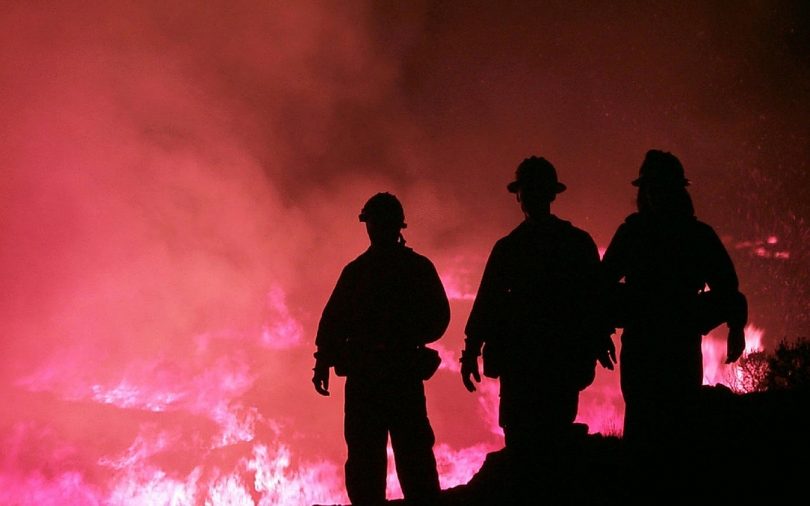 Kimberley Simpson, University of Sheffield takes a look at how habitats recover from wildfire…

The apocalyptic images of desolate, scorched landscapes following the wildfires in Greater Manchester and Lancashire are hard to reconcile with the lush, picturesque moorland scenery that had existed just days before. While the fight to extinguish these fires continues – and may do so for weeks – our thoughts turn to the recovery of the affected area that now exceeds 2,000 hectares in size.

Words that have been used to describe the burnt areas in the media include “devastated”, “ravaged” and “barren” – but is this really the case? The question now is whether our moorlands, which are home to many rare and endangered species and play an important role in carbon and water storage, will be able to recover from this “relentless destruction”.

The full scale of the impact to wildlife and the moorland habitat will not be known until the blaze is out but some of the immediate effects are clear. Animals that could escape the flames, such as deer and mountain hares, have moved to more hospitable landscapes. But those with more limited mobility, for example small mammals, reptiles, amphibians and insects, may not have been so fortunate.

The timing has been particularly crucial for species of ground-nesting birds, such as skylarks, meadow pipits, curlews and short-eared owls, whose nests and young are at risk of being burned. For plants, all vegetation above the ground will have been scorched and many seeds and root systems will have been destroyed by the heat. The fire may also be having effects on the soil – there have been reports of smouldering peat fires.

Severe fire can act as a steriliser, essentially resetting the successional clock (how an ecosystem progressively changes over time) in an area by reducing complex and established communities of fungi, microbes, plants and animals to bare soil. At extremes it can also heat and damage the soil’s structure and community of organisms, which may trigger irreversible erosion.

Of particular concern in these current fires is the burning and resultant loss of peat and its associated vegetation, which not only releases large quantities of greenhouse gases and accumulated pollutants (such as heavy metals) but also takes a long time to recover – peat forms at a rate of 0.5 to 1mm per year. As a consequence, the complex web of interactions between moorland species of vegetation is likely to take a long time to rebuild following such a severe fire, with some species possibly becoming locally extinct.

The influence of fire can also expand beyond the burnt area. Peatlands occur mainly in upland areas covering the headwaters of most major British rivers and, as such, fires can cause large amounts of organic carbon to be deposited into rivers. This may have significant negative effects on river inhabitants.

Much of the scientific literature on the ecological effects of moorland fires focuses on small-scale, controlled fires. Such fires have been used to manage moorland for grouse shooting and may also be an effective conservation tool. For example, studies from five Peak District moors demonstrate that controlled fires are important in maintaining plant diversity.

The lack of controlled burning in the affected areas is suggested as a contributing factor to the scale and intensity of the wildfires with fuel loads having built up over time. The effects of severe, uncontrolled wildfires are less well understood but there is growing evidence that they can have very serious ecological consequences.

But we must not to quickly write off the resilience of our moorland wildlife in the face of these fires. The earliest evidence of wildfires comes from 420m years ago and since then many species of plants and animals have developed ways to survive, regenerate and even take advantage of fire. Some species, such as pine and banksia trees, have gone so far as to become completely dependent upon fire to release their seeds and fulfil their life cycle.

In addition to natural fires, species from the moorlands of northern Europe have experienced frequent controlled burns for over 150 years. Moorland plants possess an array of strategies to persist through fire including re-sprouting from protected buds (for example, purple moor grass) and underground structures called rhizomes (such as bilberry), or regenerating from seeds (heather).

These survival mechanisms may come as a direct result of these human-driven management strategies. For example, heather seeds from fire managed heathlands germinate more quickly when exposed to smoke in comparison to those from other infrequently burnt habitats. As a result they are better able to make the most of the bare, nutrient-rich soil exposed by the fire. So the recovery of moorland vegetation on scorched land may be quicker particularly if assisted by patches of unburned vegetation.

It is the severity of these fires, which is yet unknown, that will be decisive to their ecological impact. Importantly, with upland fires becoming more frequent under climate change, we must find a management solution, such as the use of regular burns to control fuel loads, that reduces the impact of wildfires and preserves these internationally important ecosystems.

This article was originally published on The Conversation. Read the original article.