Home » Holding back the tide 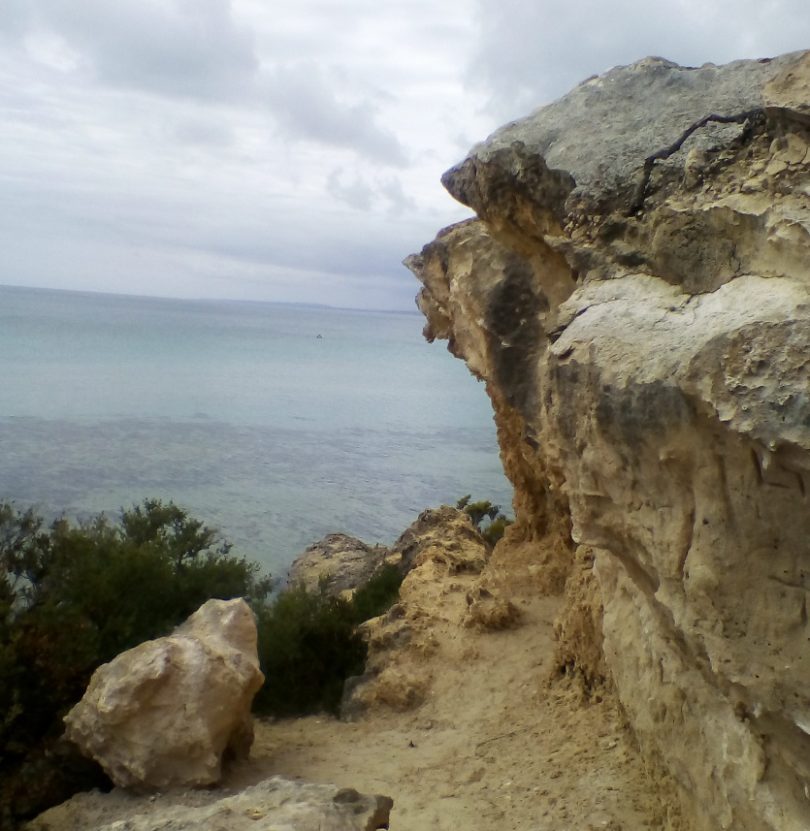 Dan Reed works as a ranger on a coastal reserve on the edge of Port Phillip Bay, Australia…

My work on the foreshore reserve is varied, both in terms of the physical task and the level of job satisfaction. Some days I want to poke my eyes out, and some days there is evident value in the outcomes. I would have seen those values this week, if I hadn’t already poked my eyes out by Monday afternoon.

My week was spent digging, digging and digging some more.

The aim of this mundane manual labour was, luckily for my morale, of significant conservation and cultural importance — attempt to slow the rate of erosion of the sand dune system and the limestone cliffs at Rye. Both of these ecosystems support a range of plant and animal life that are in serious decline along Victoria’s coastline. They are also sites of significant historical importance, with much archaeological evidence of aboriginal activity in the area.

Note that I write slow not stop the erosion. With sea level rises and raging winter storm events, the coastline is going to continue to retreat no matter the effort. Between the White Cliffs at Rye and the Eastern Sister at Sorrento this is the case. Despite several re-nourishment programmes (which is official language for importing thousands of tonnes of sand), the combination of seasonally varied long-shore drift and northerly winds reclaim the sand to the sea.

The limestone cliffs face into the shallow waters of Port Phillip bay and are resisting the wave action slightly better than the softer sand dunes that flank them to the east and west — in part thanks to the sea wall that skirts their base. Although this sea wall is protecting the cliffs from being undercut by wave action, it is deflecting the energy to the more susceptible sand dunes.

Added to this, a disused drainage system runs through the reserve and exits through the dunes to the west. Constructed in a time before polluting the sea was considered wrong, the drainage channel was designed to direct road surface runoff into the bay. It has been out of action for some time, but following high levels of precipitation, flash floods bypass the new drainage system and wash out through the dune, taking tonnes of sand away with it.

We dug down until we uncovered and extracted the old concrete drainage pipes and then excavated large soak pits. These are designed to allow the high volumes of water time to filtrate into the earth, slowing its energy and therefore its ability to erode.

At the base of the cliff are a couple of heritage listed boat sheds, squeezed between a collapsing dune system and shrinking beach. As part of our efforts to slow the inevitable we are replanting fast growing native vegetation such as coastal salt bush (Atriplex isatideas) for stabilisation, and advising owners to relocate boat sheds away from vulnerable areas to protect their assets whilst allowing us better access for ongoing management.

During a tea break walk of the beach a stubborn shed owner approached. “We are not moving” they said, in a way that suggested the sentence comprised the end of an internal monologue that had started a few minutes before I arrived.

Without waiting for any reply, they continued to give a chronological run down of the family’s connection to their boat shed. Before reaffirming that they would not be relocating.

“We are going to BEAT nature!” This was said with such conviction that it suggested to me that they were not worth debating with. They were after all standing on the deck of a boat shed which now hovers two metres above the sand that it used to sit on.

“You’re already losing. Nature isn’t in a hurry, it’s playing the long game and it has time on its side … unlike you” — is what I could have said.

Instead, a smile and a nod and I kept on walking. Back to the digging, to hold off nature for a few more years, until inevitably the whole things collapses into the bay.