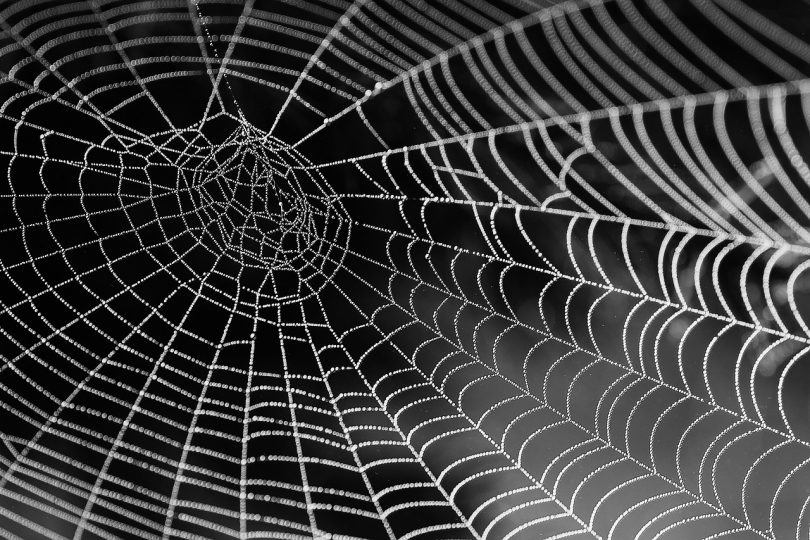 Jo-Anne Nina Sewlal, is currently the expert in spiders for Trinidad & Tobago and the Eastern Caribbean. In this article, she takes a closer look at spider webs…

When people find out that I study spiders for a living, many questions follow. One most often asked is about the webs they make. Spider webs are complex and serve a range of functions, rather than just collecting dust and making our homes look dirty. They have a great variety of designs and are used in multiple ways by both spiders and humans. So in today’s feature, we will look at the diversity of spiders’ webs.

There are four main parts of a web; the hub or centre of a web where the spider usually rests, the frame threads or borders of the web, the sticky spiral or insect catching area, and the anchor points like the guideline attaching the web to the substrate. 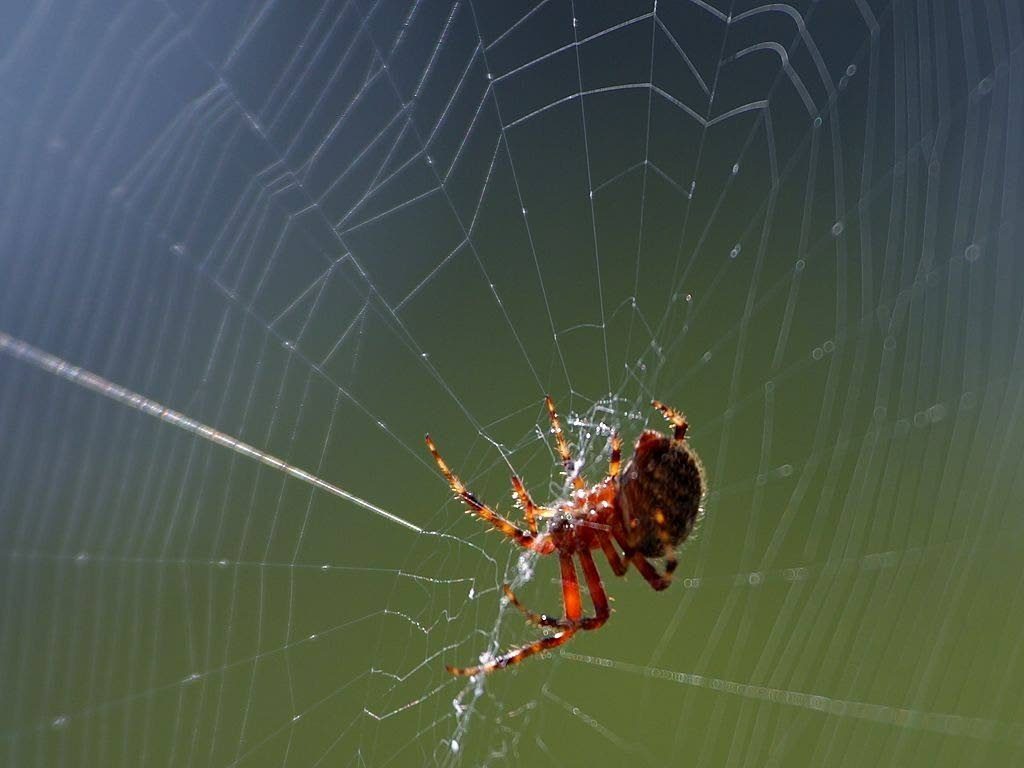 Spider webs are complex and serve a range of functions

When you think of spider webs, I am sure that you are imagining the design often seen in story books or at Halloween. These webs are called orb webs and are roughly circular and filled by a series of concentric circles. The entire web is divided into sectors by separate silk threads, like the slices of a pizza. The average orb web uses 0.1 to 0.5 mg of silk and takes between 20 to 30 minutes to build. Other web designs include sheet webs, cobwebs and “bowl and doily” webs, the latter is so called because it resembles a bowl with a crocheted doily under it. Tarantulas usually construct funnel webs.

Some spiders make highly modified webs like those that belong to the family Deinopidae or net casting spiders. These make a small orb web which they hold in their first two pairs of legs and wait. When a suitable prey walks by, they throw the web over them like a fisherman casting a net.

Others include special structures in their webs such as stabilimenta, which consists of thick bands of silk placed in a variety of patterns, for instance in an X-pattern by Argiope argentata or in tufts along the frame threads as with Gasteracantha cancriformis, so that the web looks like it is outlined by a dashed line. This silk is highly reflective and is believed to either hide the spider’s position in the web or trick flying insects into thinking that they are flying into a gap in the vegetation. Some spiders include dry leaves, faeces and old exoskeletons to camouflage their position in the web. 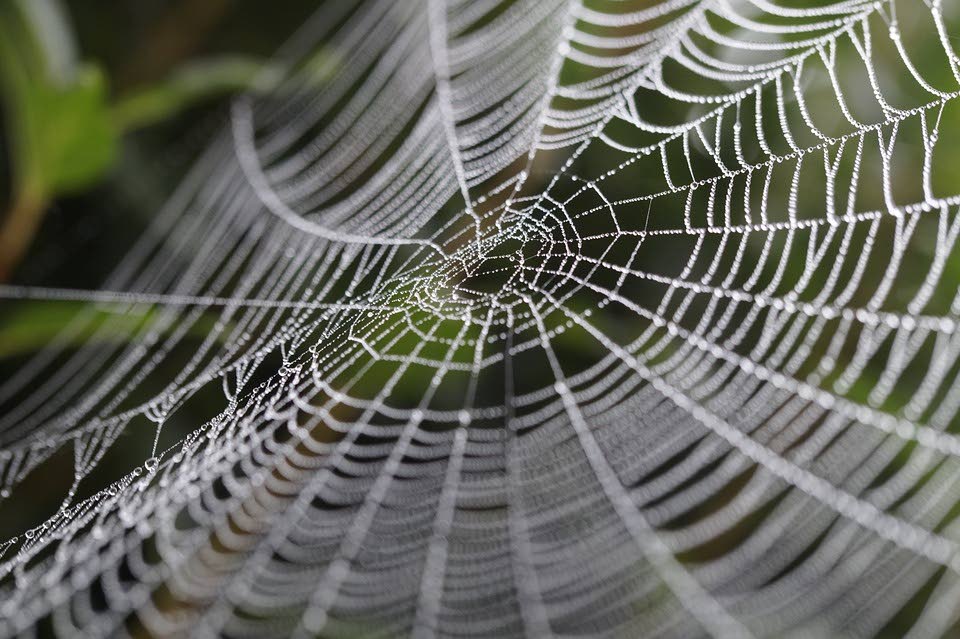 Spiders also use their webs as a means of defence. For example, some violently shake their webs, such as Azilia vachoni. Webs also give the spiders something to hold on to while they shake their bodies, for example, Mesabolivar aurantiacus. This red spider holds onto the web and swings its body in a circular motion until it is a blur to the human eye, making it difficult for predators to focus and capture them. It also makes the spider appear much larger than it really is, thus acting as an intimidation tactic against predators. Some spiders add tangles of silk on one or both sides of the orb web. These modifications serve as an early warning system (like a burglar alarm) against approaching predators, particularly wasps.

I am also often asked about large webs. How do those come about? Typically built by larger web-building species, they can span over a metre in diameter. This is not unexpected as large spiders need large webs to subdue large prey. For instance, the nocturnal species Eriophora atrax is found in this country and can feed on small bats. This is not a hard and fast rule since in the much smaller islands of the Eastern Caribbean like Nevis, large webs of the same diameter are made by small species with a body length measuring less than a centimetre. This is because they are the largest spider species on the island and there are not larger web-building species to compete with them.

Some of these giant webs are made through cooperation. There are approximately 20 species that show varying degrees of sociality. Anelosimus eximus is an example of a social spider species. Some of us may have seen this on hikes and have been told that they are tarantula webs. However, if you look at these webs close up, for example that of Philoponella republica, they are actually a collection of individual orb webs. The spiders form these combined webs because they can make more webbing to catch more prey and bigger prey. 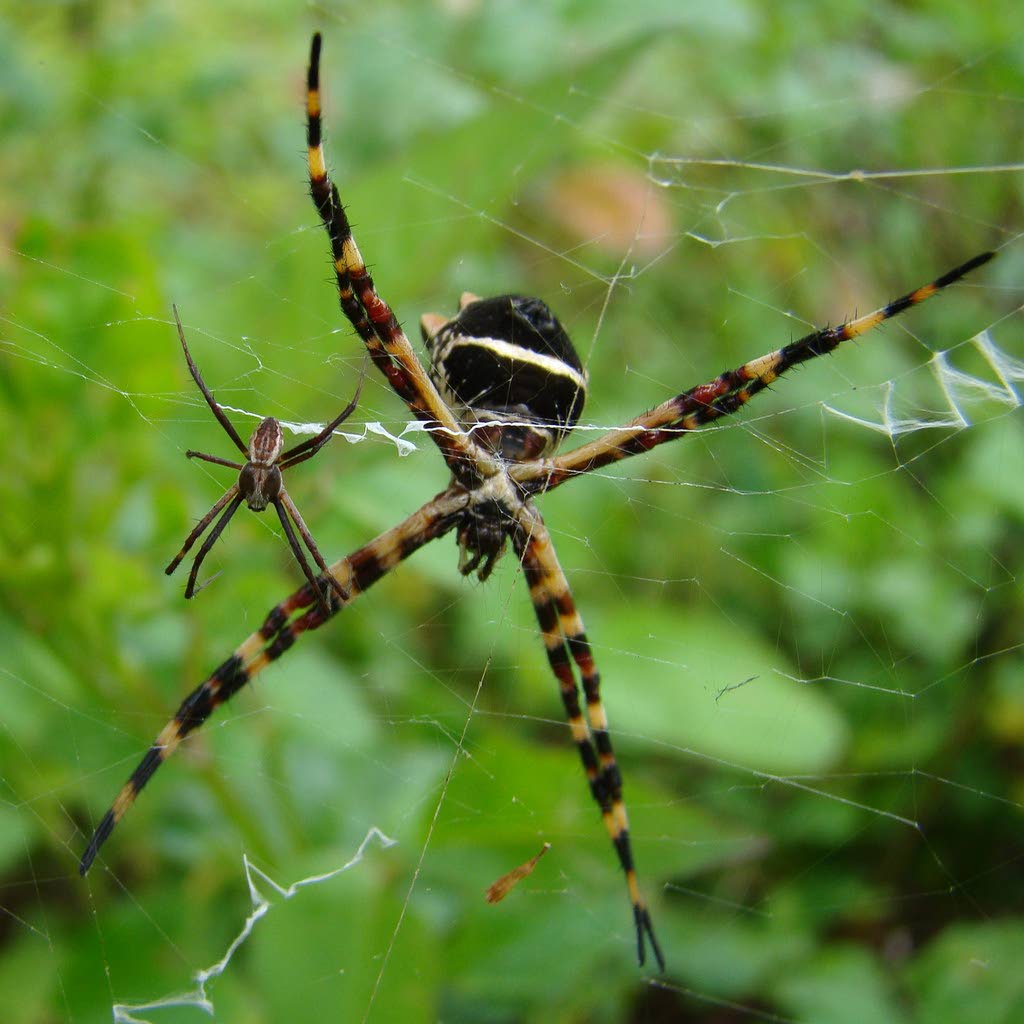 X-pattern web of the Argiope argentata

Although webs are primarily used by the spiders for catching prey, web-building spiders depend on their webs as a means of communication. For instance, to determine if a prey or suitor is present in their web. Males also have taste receptors on their legs so they taste the silk and can tell if the female is receptive to mating.

I am also often asked, “Are spiders and their webs useful to humans?” Spider silk is the toughest material in the man-made and natural worlds. It is stronger than steel and stretches about eight times more than Kevlar — the material that bulletproof vests are made of. As a result, research is underway on the use of spider webs in bulletproof vest construction. Webs are also used in art, where paintings can be made using cobwebs as a canvas. In the past, spider webs were used in medicine as bandages – this is because they contain vitamin K which helps in blood clotting. In the South Pacific, spider webs are used as fishing nets. Fishermen make a wooden frame and a spider is introduced to build a web on the frame. 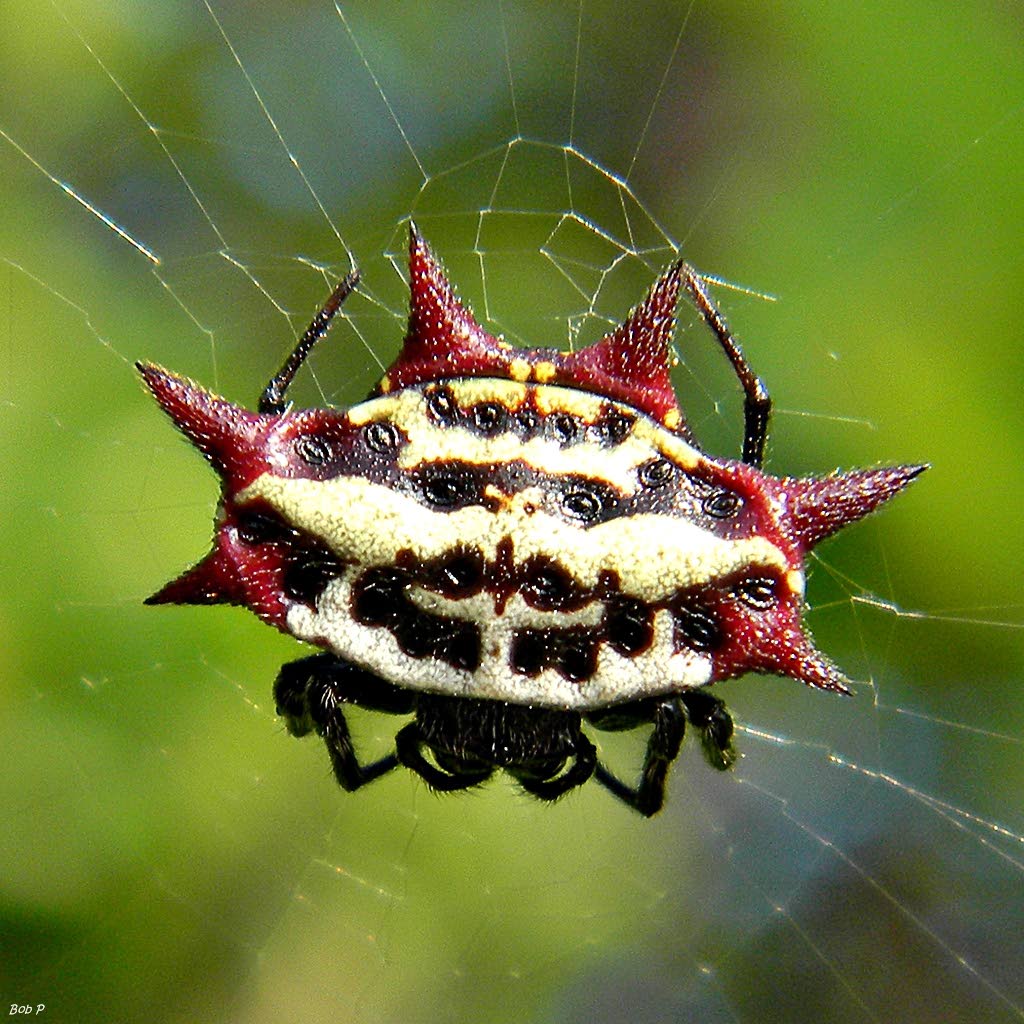 Finally, I am sure you have seen very flimsy webs and wondered why did the spider even bother to make it in the first place? The strength and elasticity of the silk means that it can blow in the wind like a flag, if they were taut they would easily break, this is important in engineering structures that can withstand hurricanes.

I hope that this article has given you a new appreciation for spiders, and the intricate webs that they produce.

Article first published in the Trinidad and Tobago Newsday on 16th June 2018.

About the Author: Jo-Anne Nina Sewlal (BSc., MPhil., Ph.D., FLS., CBiol., CSci., MSB., FRES., FRGS., FBNA., R. Anim. Sci., MIEnvSc.), has over 16 years experience as an arachnologist and ecologist, and is currently the expert in spiders for Trinidad & Tobago and the Eastern Caribbean. She also serves as the secretary for The Caribbean Academy of Sciences (Executive and T&T Chapter), and the editor of their newsletter. Jo-Anne edits the newsletter for Environment TOBAGO, writes a weekly newspaper column on ecology and environmental topics, and is quoted in articles for National Geographic Magazine. She is the co-founder of the NGO, Creative Minds Development Initiative, aimed at making learning accessible and encouraging communities to overcome all challenges including those that are geographically isolated.