In the first article of the series, Nikki Banfield (Communications Officer) introduces the Isles of Scilly (IOS) and the work of the IOS Wildlife Trust…

The Isles of Scilly, or Scilly (never the Scilly Isles or the Scillies), are an archipelago of over two hundred islands, islets and rocks; twenty-eight miles off the Cornish coast, out into the Atlantic. You may have heard of our tiny islands, often described by those in the tourism industry as a sub-tropical paradise, but there is so much more to Scilly than being, “slightly warmer than the rest of the UK”. You cannot escape the natural environment; it encompasses and influences everything, with nearly every aspect of Island life being dictated by weather and tides.

If planning is your thing, then be prepared to change your plans, often. Better still, don’t plan — be spontaneous and go with the flow. Enjoy the landscapes, the nature, the history and the beauty, whatever the weather.

If you love the outdoors and all things natural, then there really is something for everyone here; unless skiing is your thing, or you’re after warm seas to swim in, or creatures that are generally common place on the “Mainland” — in which case, we simply don’t have those!

You’d be forgiven for thinking that the archipelago is a natural, pristine, untouched landscape; far from it, it has been heavily shaped and moulded by both people and industry over many thousands of years.

It is a place where an array of native and non-native plant species thrive both in and out of tended gardens; where the commonplace (from blackbird to speckled wood) have their own little “Island” twists and quirks; where many species are absent from the Islands (i.e. fox and badger), but where we do have a number of species endemic to Scilly (i.e. Scilly shrew), or species that are found here and few other places (i.e. least adder’s-tongue).

The Island’s boast numerous designations for various aspects and features. The whole of the archipelago is an Area of Outstanding Natural Beauty (AONB) and within that we have twenty-six Sites of Special Scientific Interest (SSSI), twenty-four of which are managed and looked after by the Isles of Scilly Wildlife Trust…but more about us in a minute.

In addition to this, the Islands are home to eleven coastal Marine Conservations Zones (MCZ’s) plus a further six offshore; Scilly is a RAMSAR and European Marine Site (EMS), a Special Protection Area (SPA) and Special Area of Conservation (SAC). You will currently find five registered Protected Wreck Sites, over one hundred listed buildings and more than two hundred Scheduled Ancient Monuments (SAMs), including two Scheduled Landscapes (Samson & Shipman Head Down on Bryher).

It sounds beautiful and idyllic, almost other worldly; in many respects it is, but it has its challenges and you have to be a special sort of person to cope with what Island life throws at you. 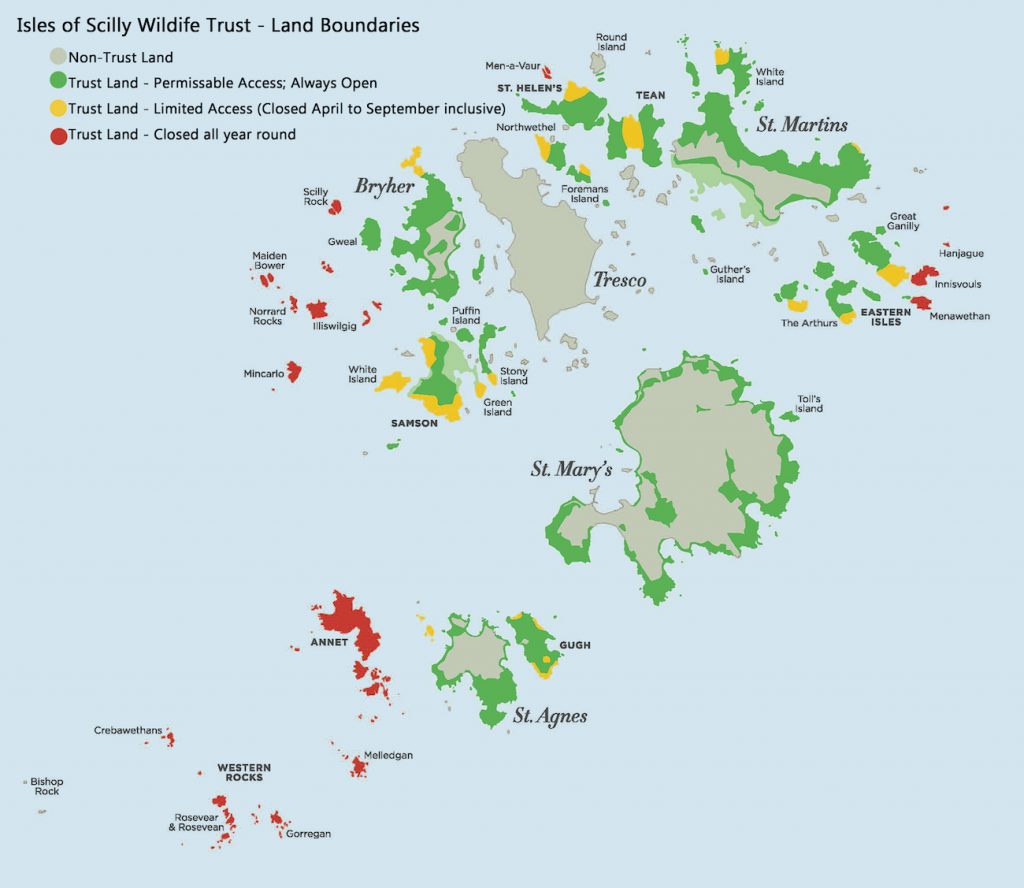 We look after more than 60% of the land mass (just under two thousand hectares), leased from the Duchy of Cornwall on a ninety-nine year fully repairing and insuring lease. This includes the inhabited and uninhabited islands, both marine and terrestrial habitats — most of which are open and accessible for everyone to enjoy all year round (areas that are closed or restricted at certain times of the year are done so in order to minimise disturbance to our regionally, nationally and internationally important breeding seabird populations and also our breeding Atlantic grey seals.) 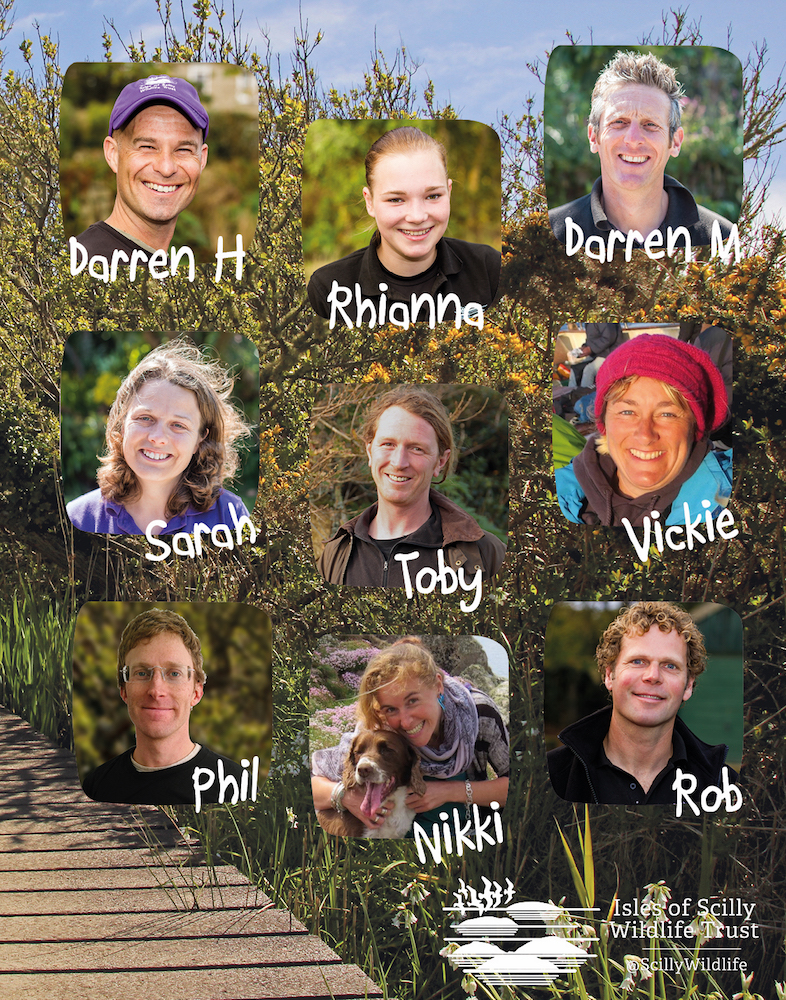 The Trust is managed by a board of ten Trustees (six of whom live on the Islands and four of whom are Mainland based), and on a day-to-day basis, the work of the Trust is delivered by a dedicated staff team of nine. Yes, that’s nine people looking after one thousand three hundred and thirty-three gorse coated, bracken and bramble enveloped, Pittosporum encroaching football pitches (for those of you that are into sport).

Our team of four Rangers (Rob, Rhianna, Toby and Phil) and Head Ranger (Darren M), are “out in the field” in all weathers, completing the conservation, management and maintenance work set out in the Trust’s Management Plan and Work Programme. Communications Officer (Nikki) and Education Ranger (Darren H), are responsible for organising and delivering our action packed educational events and activities programme for kids of all sizes. Our newly appointed Seabird Ecologist (Vickie), is carrying out research and survey work across the Islands — monitoring our breeding seabirds. Our CEO (Sarah), is primarily office based and does all of the things expected of a CEO and much more, whilst ensuring that the Charity is running smoothly and efficiently.

In addition to the human element, we have a small herd of Ruby Red Devon’s (Carrot, Flake, Apple, Hettie and Moyana). Their primary objective is to graze our headlands, coastal strips and wetland areas, in line with our detailed conservation grazing programme.

The majority of the work, which we complete, is financed through time-limited grant funding (90% of our income).

Consequently, a large proportion of this work is very targeted with specific outcomes. Examples of this are the conservation work that we carry out on the uninhabited islands; managing, restoring and maintaining habitats to encourage continued breeding of ground and burrow nesting seabirds, or the management of invasive plant species such as Pittosporum, gorse, bracken and bramble (since the cessation of grazing), to recreating and managing the habitats for our smaller, rarer plant species and animals to thrive, i.e. the dwarf pansy, orange birds-foot and the least adder’s-tongue.

The remaining 10% of funding comes from membership, donations and legacies, and allows us to carry out what is often considered by our local community and visitors to be, “the more visible and valuable work”; i.e. beach cleans, path clearance and ongoing maintenance of facilities, such as the boardwalks and bird hides.

Over the coming months, we hope to be able to share different elements and aspects of our work with you — comprising both general content regarding our ongoing work across the Islands, and more focussed information regarding specific projects or programmes of work that are taking place.

If we’ve piqued your interest already, then why not follow us on Facebook, Twitter or Instagram to get regular, daily instalments regarding the ongoing conservation work being carried out for the benefit of people and wildlife, in our remote south-west corner of the UK.