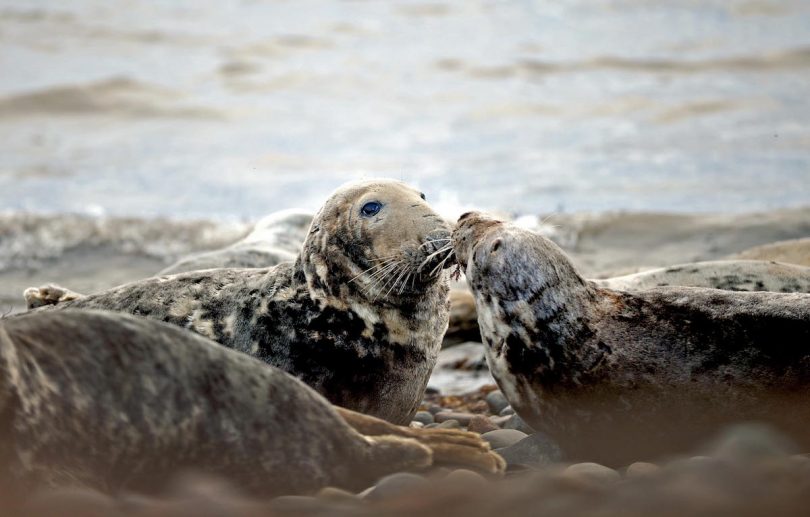 South Walney Nature Reserve at the southern tip of Walney Island in Cumbria has long been renowned as an excellent birding reserve with a variety of breeding and overwintering waders, wildfowl and seabirds. However, in more recent years, it is the larger residents – grey seals – that have been attracting the interest of visitors to the reserve, as well as the staff and volunteers who monitor the wildlife…

Cumbria Wildlife Trust started to manage South Walney Nature Reserve in 1963 and historic records show that grey seals (Halichoerus grypus) were first observed around the reserve in the early 1980s either alone or in pairs, most commonly during the summer months. In the mid-1990s, the reserve started to become established as the only haul-out site for grey seals in the North West of England. Since then, non-breeding seals have been using the protected beaches on the reserve, where there is no public access, to rest and moult. Over time, numbers have increased and grey seals can now be observed on and around the reserve year-round. Alongside the increase in seal numbers, a change in population structure and behaviour has also been observed, with the establishment of the first breeding colony in the region taking place on the reserve. 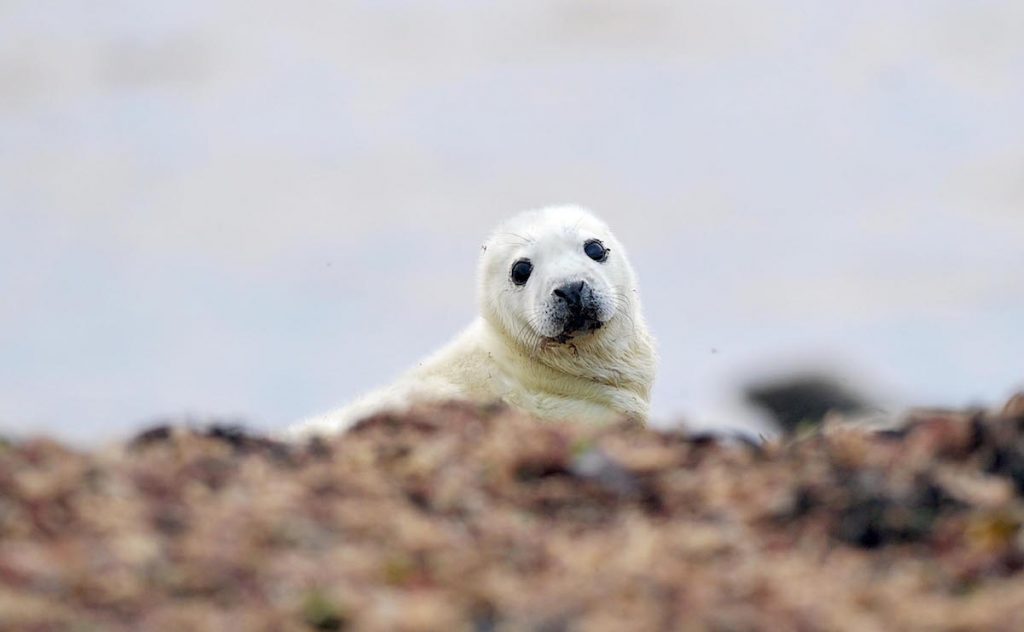 The seals haul-out on the southernmost tip of the Island, a shingle spit that is connected to the mainland on one side. Grey seals can spend up to two thirds of their time at sea foraging or travelling between areas, however, they haul-out in large numbers on land to rest, breed, undertake their annual moult and digest food. They are highly sensitive to disturbance and somewhat ungainly on land, so they tend to prefer haul-out sites with minimal human disturbance and easy access to the sea. As the spit at South Walney is surrounded by the sea on three sides and public access is prohibited, it provides the seals with an ideal haul-out site.

The Trust started to monitor the seal population at South Walney informally in the early 1980s, before a keen group of volunteers then started to formalise the seal surveys in the mid-1990s – keeping a record of the number and sex of the seals using the beaches and sea around the reserve. Over the past seven years the number and complexity of the surveys have increased, and a variety of different survey methodologies have been trialled, to try and build up a better picture of the changes in population structure and behaviour of the seals on the colony. 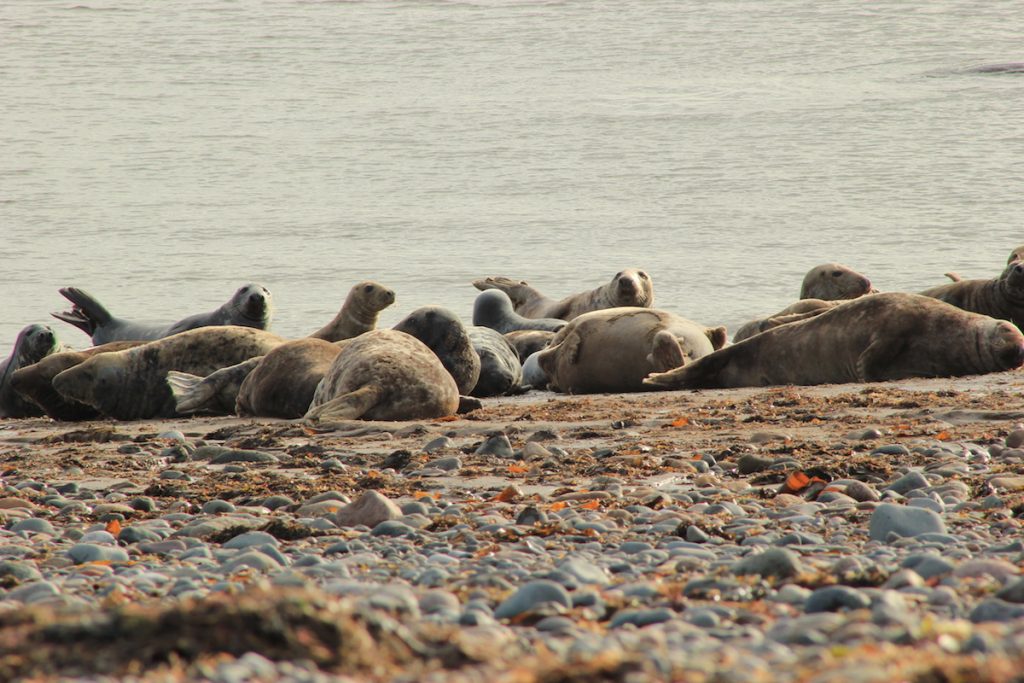 Between September and March each year (timed to avoid disturbance to breeding seabirds that nest on the end of the Island, close to the seal haul out), fortnightly seal surveys are conducted. The surveys have traditionally been undertaken by using land-based observations at low tide, in order to maximise the number of seals hauled-out and to minimise disturbance. By taking a vantage point higher up on the shingle bank of the spit and lying on the ground, the seals can be observed without affecting their behaviour. The number of males, females, and juveniles hauled out and in the water are recorded at intervals throughout the survey. Their behaviour is also recorded to gain an understanding of how the seals use the site and how they are affected by human disturbance such as boats, aircraft and recreational use of the sea surrounding Walney Island. 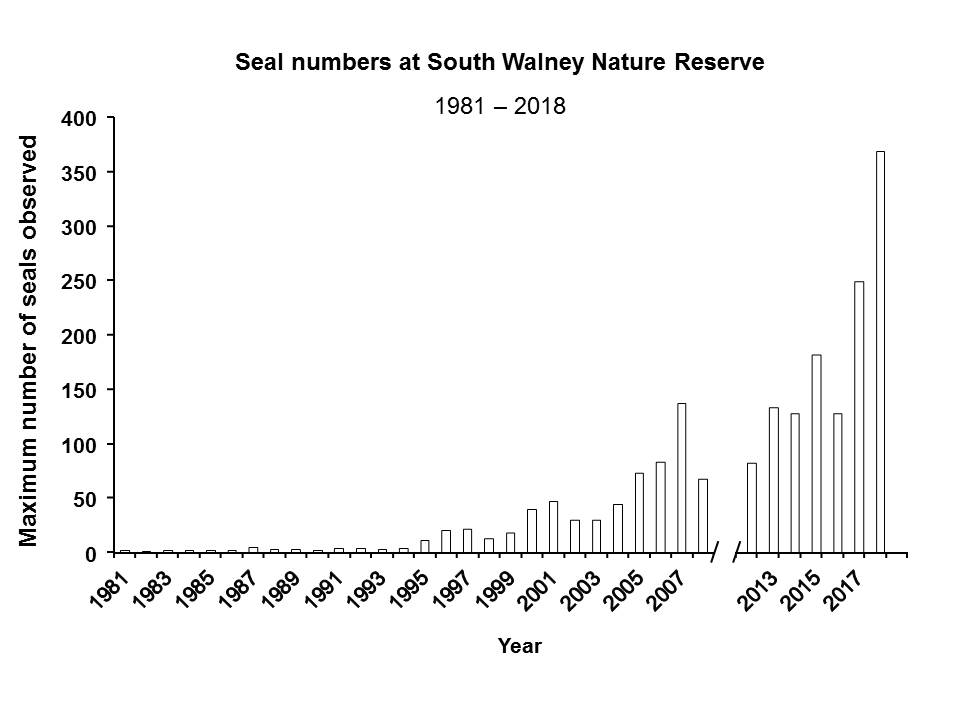 Alongside this population increase, changes have been observed in the colony and site use from a haul-out site to the establishment of an active breeding colony. In November 2015, the first two grey seal pups were born on the reserve. In the autumn of 2016, five pups were born and this increased to 10 pups in 2017.

Grey seals have an annual, synchronous breeding cycle, with females giving birth in the autumn to a single pup at the same time each year. They usually return to their own place of birth to breed year on year in the same location. Towards the end of the pup weaning period, the seals will mate again.

Along with more seals pupping on the reserve each year, an encouraging sign for the future of the breeding colony is that the same females have been recorded returning to pup on the Island. Mothers with pups tend to keep their distance from the main colony and this has given the Trust the opportunity to obtain photograph identification records to compare the mothers year-on-year.

As the colony has grown, it has become increasingly difficult to ensure that all seals present are recorded by the traditional land-based surveys due to the way that they lay close together as a group. As a result, the Trust has turned to emerging technologies to help improve the accuracy of the seal counts and observe new behaviours.

With recent advancements in technologies such as unmanned aerial vehicles, or drones, there has been a move to trial their use for ecological recording and wildlife monitoring, gathering data that has not been possible using more traditional techniques. In 2016, the Trust trialled the use of a quadcopter (a drone with four-propellers) to survey the seal colony on the reserve. This method quickly proved to be an easy and effective way to gather accurate seal counts, without causing disturbance, and was incorporated into the regular monitoring programme. This method has proved to be particularly useful as the accuracy of traditional surveys is likely to be density dependent. As such, a proportion of the increase in seal numbers in 2017 is likely to be attributable to improved counts by using images collected via drone. The drone surveys have also allowed the number and movements of seal pups to be monitored more effectively, as the pups are often dispersed across a wide area on the spit and generally away from the main colony. The birth of one seal pup was even captured on camera (unknowingly) using the drone! 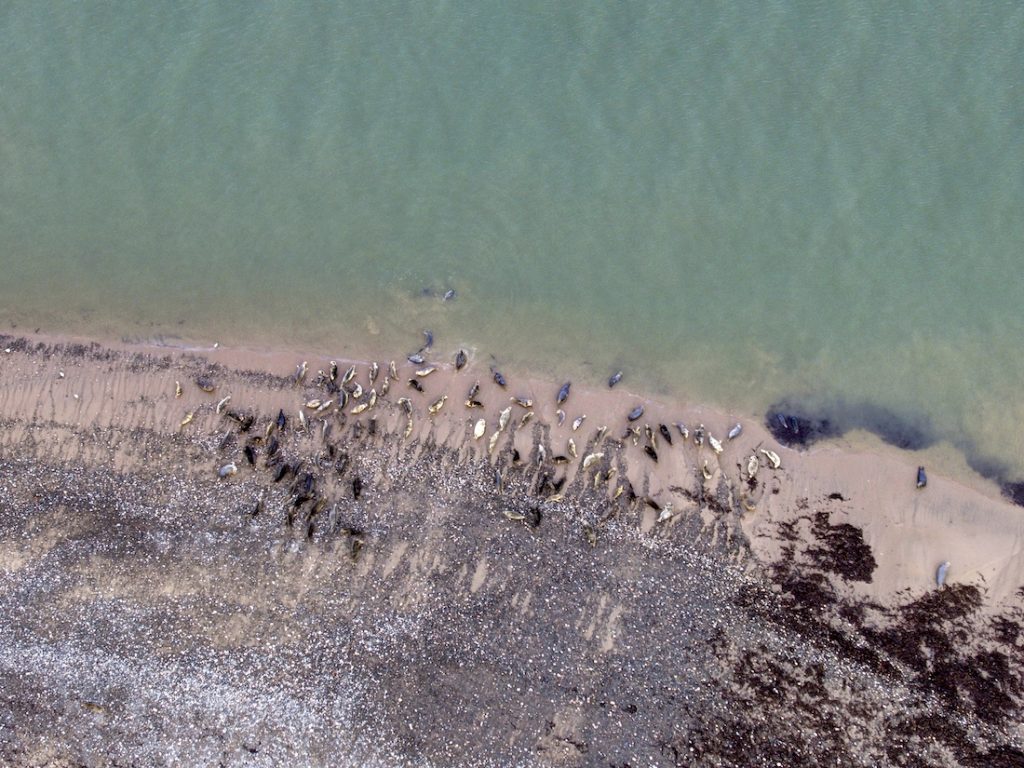 In 2016, the Trust also installed a live streaming web cam on the spit to allow the public the opportunity to watch the seals on a TV screen on the reserve, or from the comfort of their own home via the website, without encroaching on the protected beaches and causing disturbance. The web cam has also proved useful to cross-check seal count data from drone and land-based surveys, as well as for capturing screen shots from the live feed.

Through the use of live web cams, rare behaviours have also been observed close up in a way that would never have been possible otherwise. For example in the last breeding season, two pups were often spotted close together with their own mothers, but they were also seen feeding from the same mother on some occasions. Whilst it is not that unusual for a mother to feed a pup that is not hers, it usually only occurs on breeding sites where there is a high density of seals and/or pups and separation can make it difficult for the mother to identify her pup, even with their distinct call. As such, it is interesting to see this happening on the reserve where there are fewer pups and seals than the main breeding colonies across the UK. 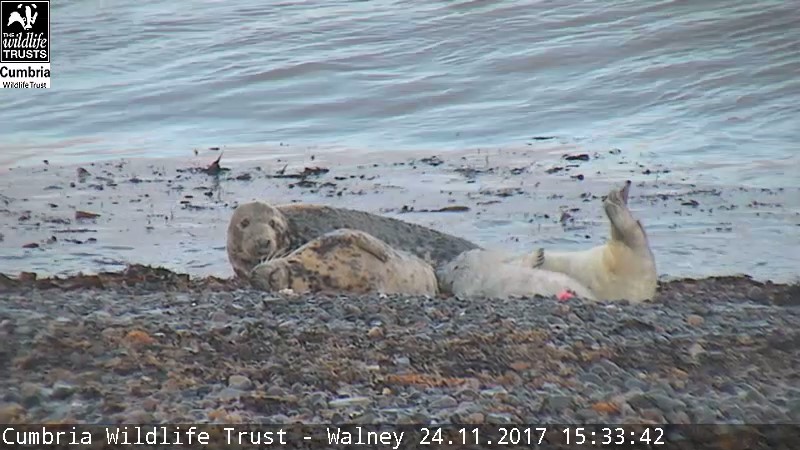 Through regular monitoring and observations the colony has been observed growing in size and there has been a dramatic change in the behaviours and activity on the site. When the colony was smaller, seals would spend a lot of their time sleeping or relaxing on the beach; very little happened unless something alerted the seals such as a passing kayak or plan. Now, due to the change in the size and the shift to a breeding colony, there is a much wider range of behaviours being exhibited such as: males guarding females with pups, males fighting or demonstrating aggressive behaviours over females/territories, juvenile seals playing, and of course mating behaviours.

The reasons for the increase in grey seal numbers and breeding status of the colony at South Walney are largely open to speculation. However, there are a number of likely contributing factors that could explain the changes that have been observed. 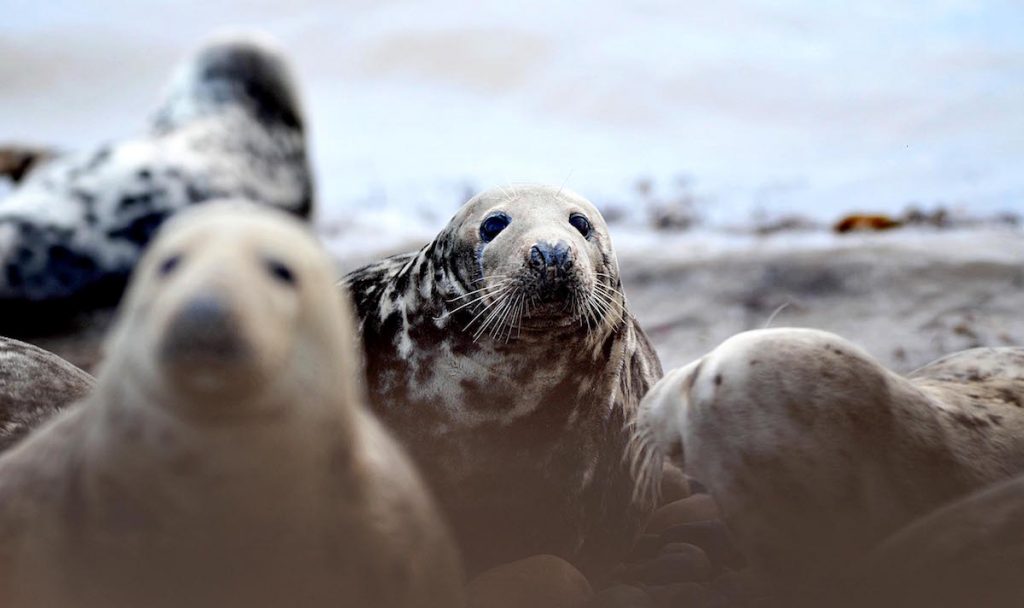 The UK population of grey seals represents approximately 40% of the world population and about 95% of the European population, forming one of three reproductively-isolated populations globally. Since the late 1970s, no licences have been issued for commercial hunting or large-scale control, and as a result the seal population across the UK has increased considerably. Over 90% of the UK grey seal population can be found in Scotland with the largest breeding sites in the Inner and Outer Hebrides, Orkney, and Isle of May. Most grey seal colonies in Scotland have stabilised in recent years, likely due to the colonies reaching the ideal density for food availability, breeding space and other factors. However, other colonies across England (such as the Farne Islands and Donna Nook) have continued to grow.

The nearest breeding colonies to South Walney are the Isle of Man, Northern Ireland and Wales where they breed on small rocky outcrops, islands or sheltered bays. It is possible that the seals now using South Walney are younger seals that have recently started breeding and have moved away from other colonies where availability of space, food or mates are more limited.

There are also potential factors such as an increase in ‘reef effects’ caused by the expansion of offshore windfarms off the coast of Walney Island, which is collectively home to the world’s largest offshore windfarms – four operational windfarm arrays and one under construction. A study in the North Sea, which tracked seals by GPS, found that certain individuals were repeatedly drawn to offshore windfarms and pipelines to forage, indicating that the man-made structures probably serve as artificial reefs, with shellfish, crabs and fish living on or around the turbines and rock armouring. Therefore, the aggregation of the seals’ prey around man-made developments off the coast of Walney Island could also be acting to draw seals to the area and contributing to the increase in numbers, although this is really a subject for further investigation. What is clear though is that in the current climate of gloom and doom around the issues facing our marine environment, this should be celebrated as one of a few rare positive news stories for marine conservation.

About the Author: Dr Emily Baxter has a BSc Hons in Marine Biology and Oceanography from the University of Plymouth PhD in the ecology and socio-economic impacts of jellyfish from the University College Cork. After some time working in academia, Emily moved to the North West of England where she is the Senior Marine Conservation Officer for the North West Wildlife Trusts. Emily works in marine policy, focussing on areas such as fisheries, Marine Protected Areas, marine planning and leading the Trusts’ campaigning and community work across North West and wider Irish Sea.