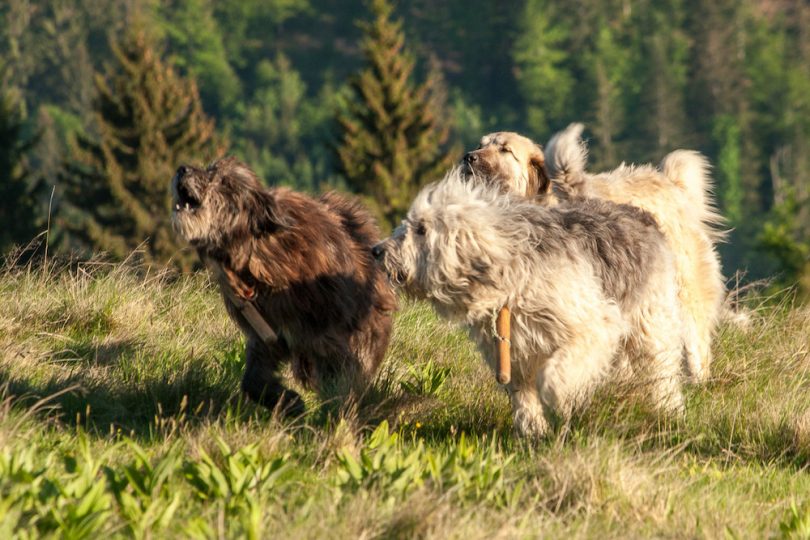 Transhumance comprises the seasonal movement of livestock and people between summer and winter pastures. It is an ancient method of pastoralism that has significant relevance to modern day discussions about rewilding. Paul White has been interested in the life and work of transhumance shepherds since his introduction to Romania in 1993. In this article, Paul looks at the role of Livestock Guardian Dogs in relation to large predator conservation….

It cannot be overemphasised how important livestock guardian dogs (LGD’s) are in the conservation and preservation of large predators. I watch shepherds on pastures for hours at a time and I am constantly amazed that they do not carry weapons in bear country and rely on their dogs for protection. They could not make a living in the mountains without their dogs unless the predators were removed. So in my opinion, human/predator coexistence is only possible with effective LGD’s. But this system, which has taken many generations to perfect, only works well with the shepherds present. 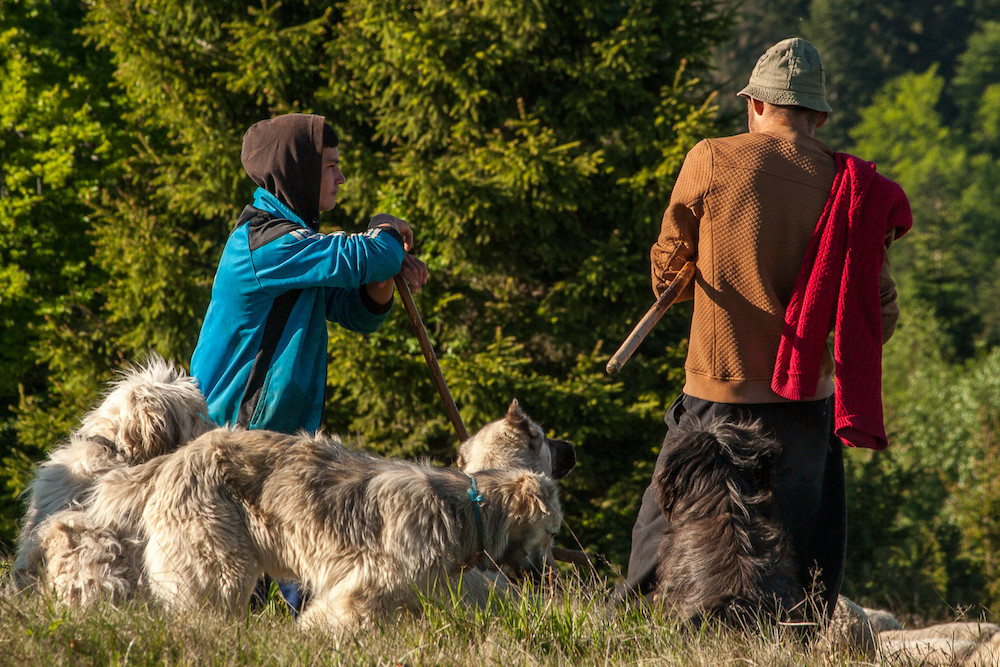 Many farmers in the west do not want the discomfort of living with their sheep in unfenced predator country and often rely too heavily on their dogs working alone and hoping they make the right decisions. This is unfair on the dogs and the sheep, and can lead to livestock depredation very quickly. This can provoke calls for wolf and bear culls and disappointment in dogs, which sometimes leads to abandonment. 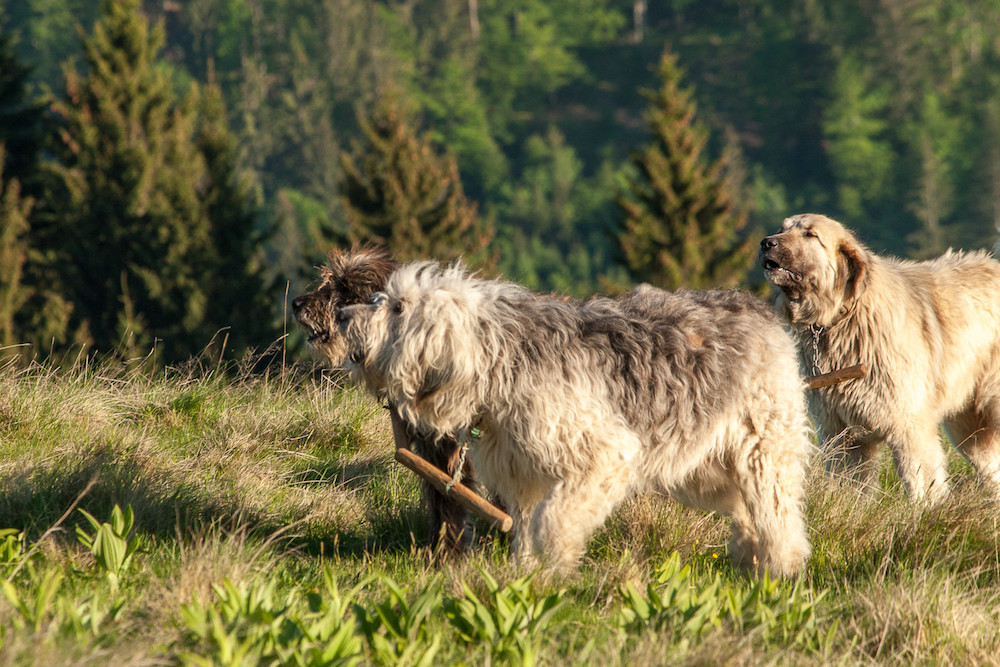 Shepherds in Transylvania are on the ground 24/7 and know their dogs intimately. They can mix and match the pack at any given time through the day depending on situations and problems as they occur. A sick or lame dog can be cared for at the camp whilst another dog is moved in to maintain the deterrent. If a wolf or bear runs into the flock, the deterrent is much more effective with shepherds and dogs working together. It must also be emphasised that a good LGD is a non-lethal deterrent. Their job is to protect but not to kill the predator. So if people really want to see a return of wolves and bears in western countries then this deterrent and protection of livestock must be done correctly. Half measures will not work unless all livestock is kept behind tall and very expensive fencing. 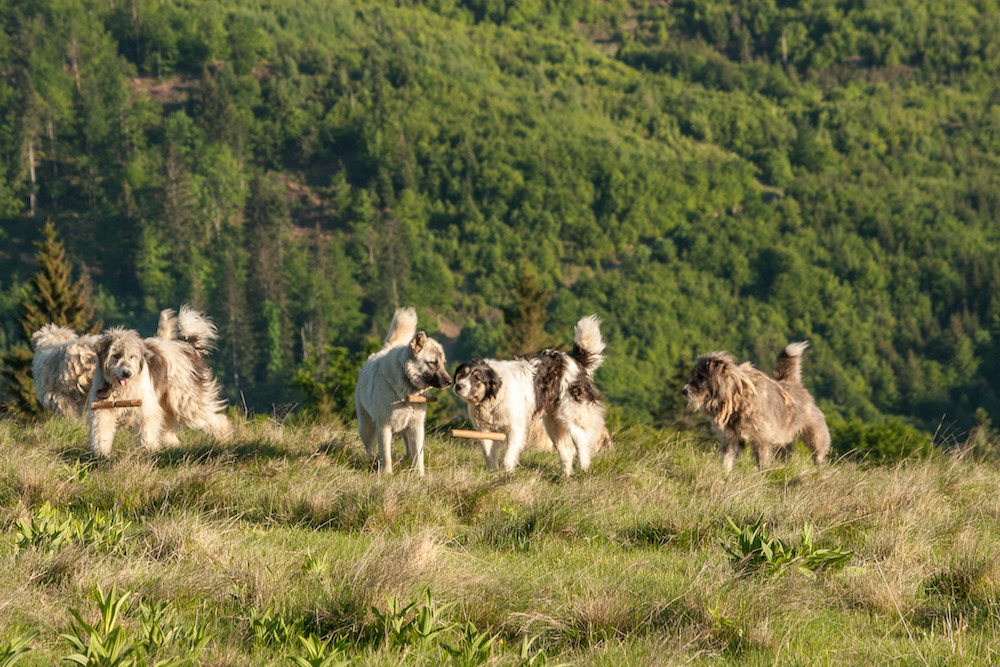 Dogs like humans have different characters, some are bolder, some bark louder and there are leaders and some who prefer to follow. There tends to be a hierarchy within the pack which is made up of individuals of different ages, size and experience. 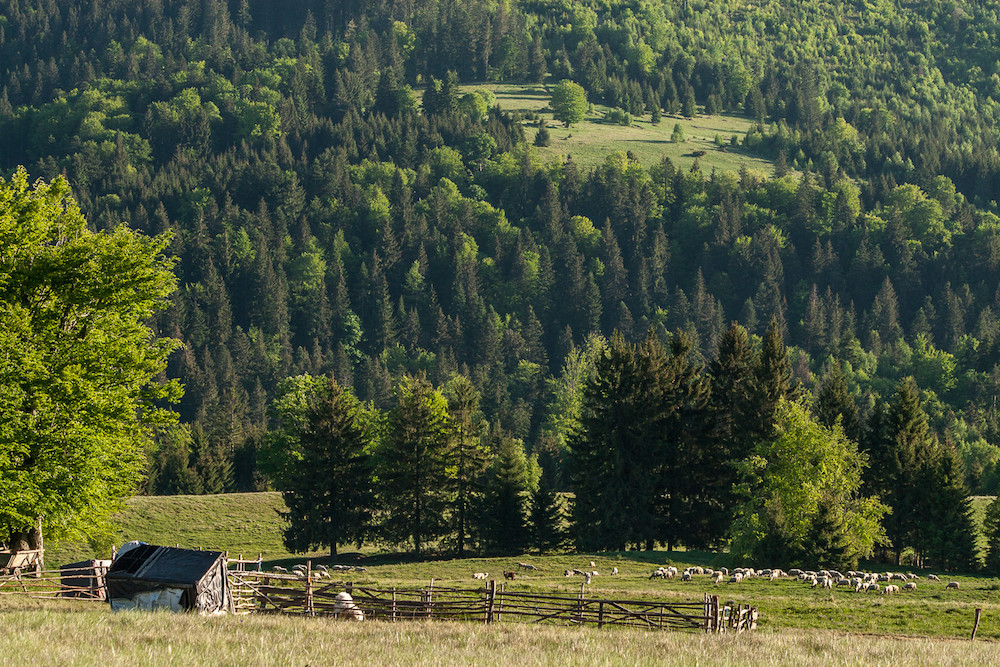 LGD’s remain with the shepherds day and night – whilst the sheep graze on surrounding meadows, when they are penned three times a day for milking, and when the sheep are corralled overnight. During darkness the predator threat peaks so the dogs remain alert. Some patrol the inner areas of the transhumance camp close to the corrals and huts whilst others take sentry duties further out on higher ground. If one of the sentries raises the alarm, several dogs will run out to assist and vice versa. To the casual observer this all appears quite random behaviour but it is not. The dogs have a system and it works well. 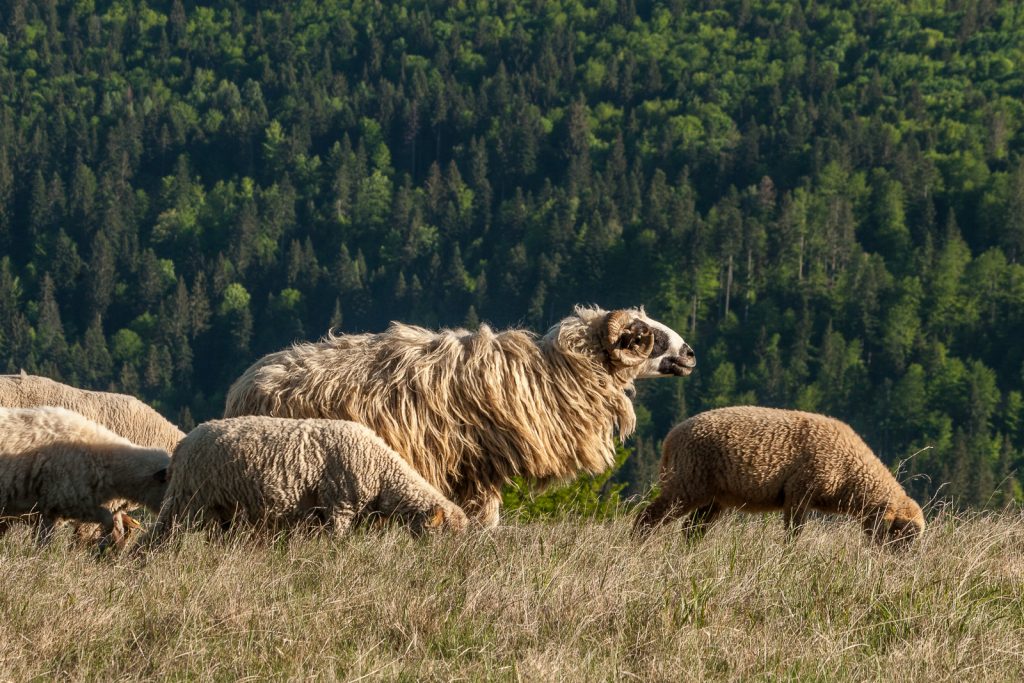 The purpose of the corrals is to pen the sheep whilst milking and to keep them safe during the night. A wolf or bear could easily enter a corral, but it is easier for the shepherds and dogs to protect them during darkness when they are all together. The shepherds sleep right next to the corrals in box like structures that look like rabbit hutches and the dogs are present too. At the front of the sleeping box is a door that opens upwards. If a bear or wolf attempts to access the corral the shepherd will jump out of the box wielding his staff shouting and screaming whilst the dogs work as a team to repel the attack. 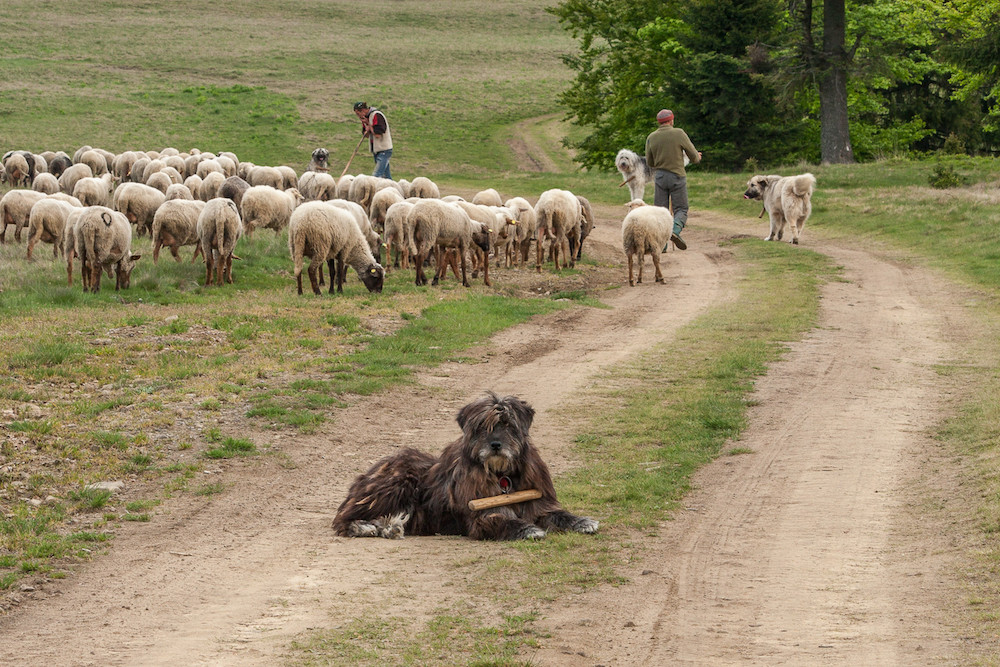 So when do the dogs rest? The pace of transhumance is very slow and whilst the sheep graze, the dogs take naps in the shade under bushes and trees. Their job is to protect when required and with dogs taking up positions inside and outside of the flock any intruders are soon noticed. When a single dog barks, the alertness of the pack instantly rises and a snoozing dog will immediately be ready to work. 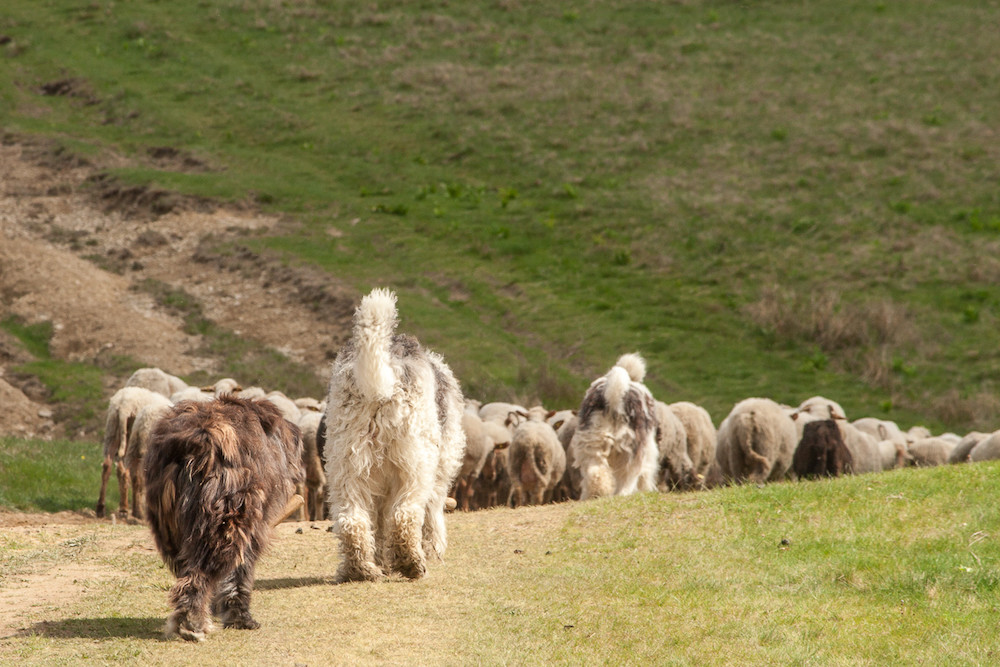 LGD’s work differently to other sheep dogs like border collies. Their job is to protect but not drive or round up sheep. So how do the shepherds maintain the integrity of the flock in vast meadows without the use of fencing? Interestingly the sheep listen to the shepherds and when they wander too far away or the flock moves on, the shepherds can be heard whistling and calling to them to move.

Some transhumance groups run pure breed LGD’s such as Carpathian, Mioritic, or Caucasian sheepdogs. However, most shepherds are too poor to afford them and take a much more pragmatic approach by using mixed breed dogs with specific traits to complement their pack. There is no pride in maintaining pure blood lines, as a useful and effective dog is far more important than it’s pedigree. Therefore traits such as strength, loyalty, guarding instinct, courage, and intelligence, are what they are looking for. These dogs are tough and aggressive but alone they are no match for a wolf or bear. Their strength is in their numbers, pack cohesion and dynamics, and it takes a good shepherd to put an effective team together. 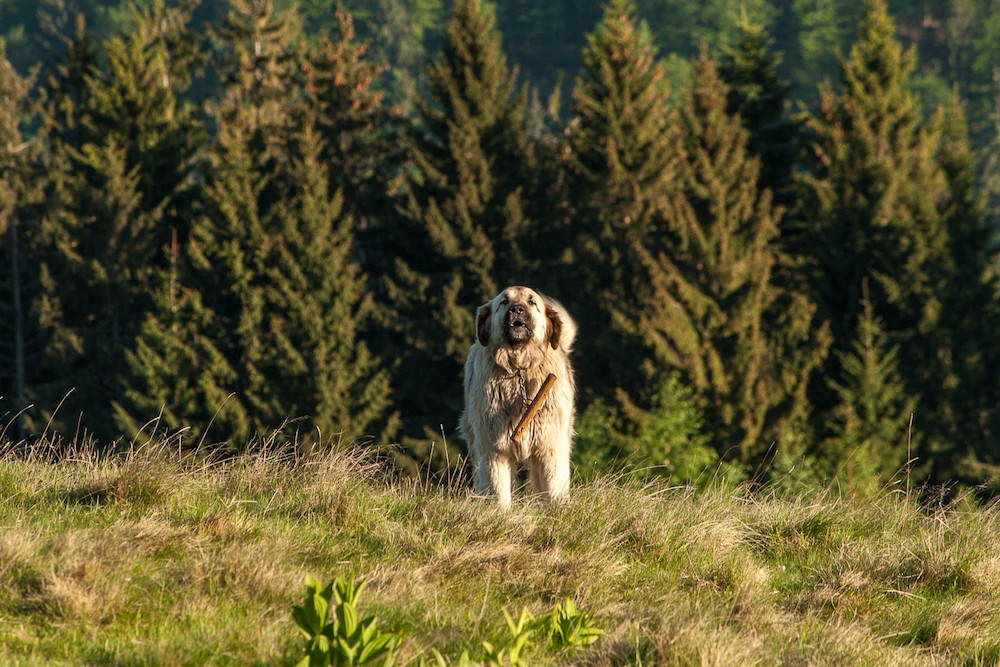 My most commonly asked question is about the sticks carried by the dogs. The stick is a legal requirement for all working LGDs in Romania. This is to protect wildlife from being chased down by the dogs. As the dog runs with the stick and builds momentum the stick starts to flail about, knocking against the shoulders of the dog thus slowing them down. 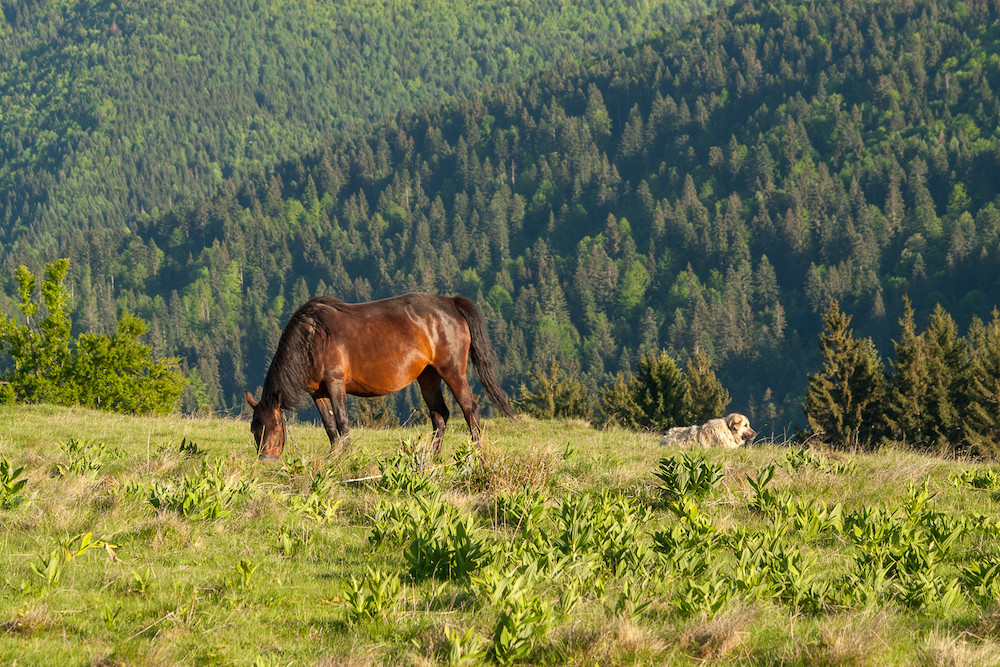 Horses are used to transport the camp from one inter-forest meadow to another. The shepherd’s huts and corrals are all temporary structures that are disassembled and loaded onto carts when fresh grazing is sought. Horses and donkeys around the shepherd’s camp are also very vocal when predators are present and form another alarm system for the shepherds. 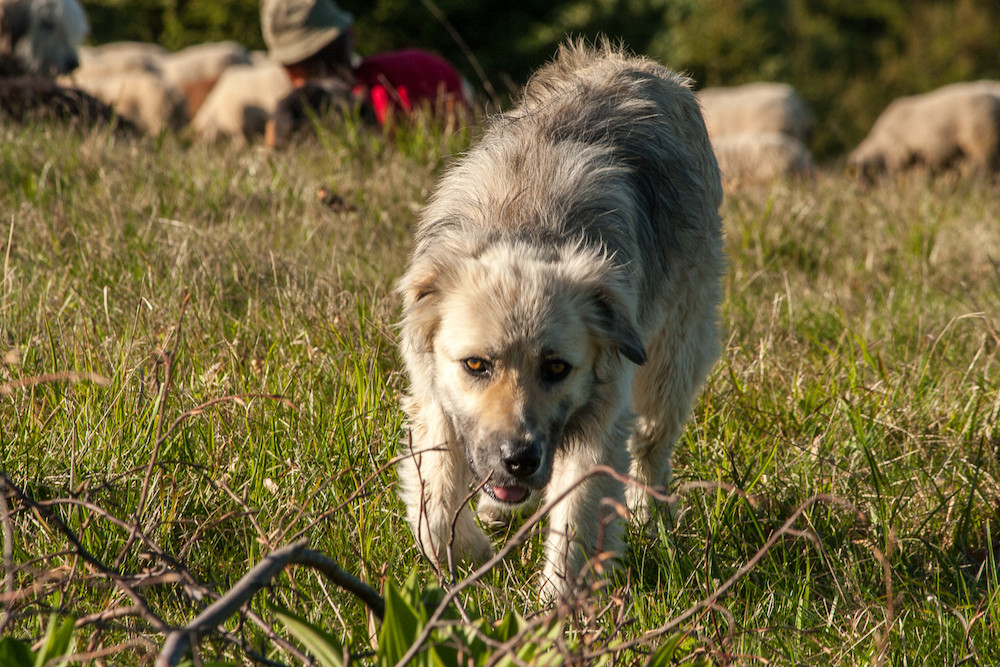 Most of what a juvenile dog learns to be an effective LGD is from the older dogs within the pack. This education along with natural instinct and supervision from the shepherds leads to a well balanced adult preferably tolerant of both people and sheep, but a formidable opponent to wolves and bears if they attempt to take livestock. The juvenile above shows an inquisitive nature without being aggressive, but this only took place after she could see that the shepherds were relaxed with my presence. 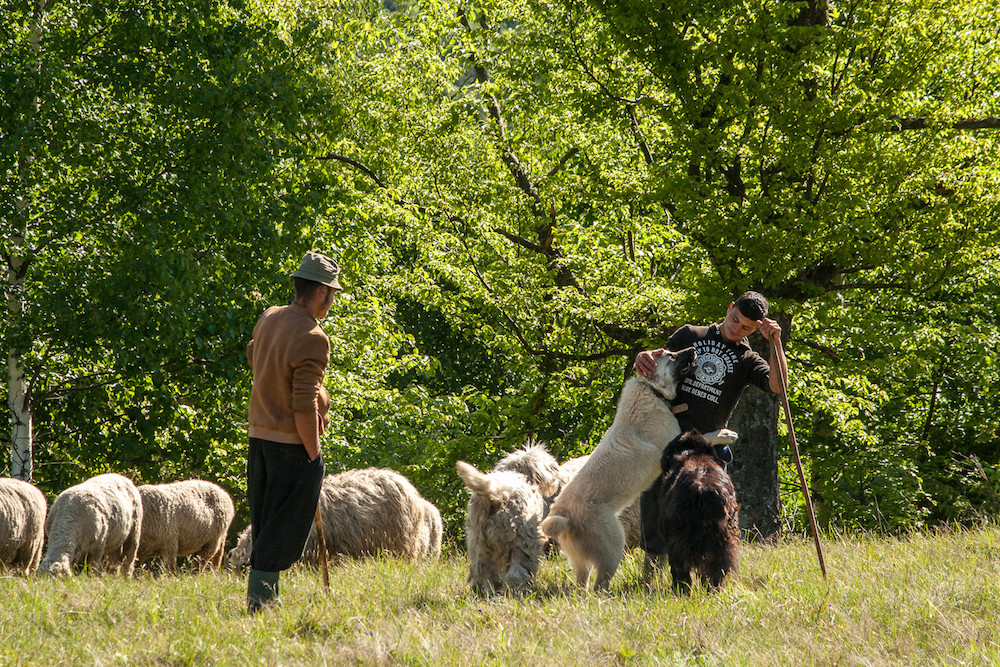 What are the negatives? Like all systems devised by humans, flaws can and do occur and transhumance is no exception. In Romania this way of life does not offer large financial rewards and poverty is not far away, so this is often where the problems start. Shepherds are in the field from April until October and after the sheep have been returned to the villagers for winter, the shepherds return home for approximately five months of the year. They then have the same chores and problems as any other villager, living on their small earnings to see them through the long cold winter. The dogs are redundant during this time, some can be used for guarding the home but ten or more dogs are a lot of mouths to feed. Unfortunately some dogs are left to run feral, hunting wildlife in local forests, causing tensions with local residents and conservationists alike. These poor practices reflect badly on transhumance as a whole, which is a pity because there are many more good shepherds than bad ones. 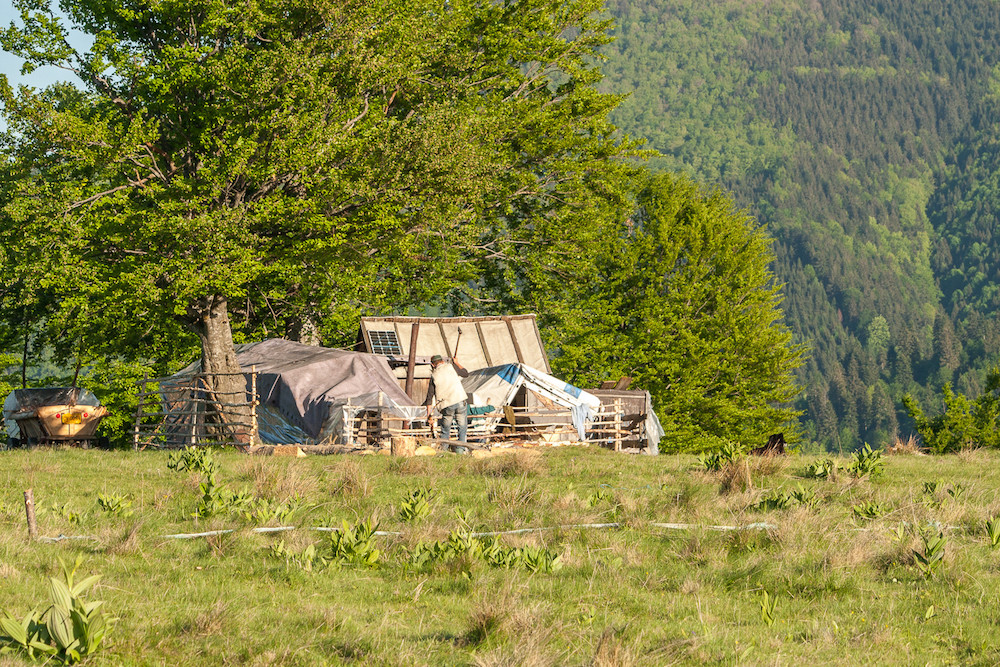 If we accept that transhumance shepherds and their livestock guardian dogs are key to large predator conservation and human coexistence, then more needs to be done to support them and their families. Shepherds often start their careers as children, missing out on a basic school education. Education is vital if they are to develop effective businesses for the future where reading and writing is essential. Unfortunately, without this many shepherds are exploited by middle men offering low prices for their commodities such as meat, milk, cheese and fleeces, which are then sold for vast profits in town and cities in both Romania and abroad.

Shepherds should be offered grants for business development and education to enable them to produce and package their own products for market, increasing their profits to see them and their dogs comfortably through the long winter months. Since Romania joined the European Union, many young shepherds have turned their backs on transhumance, seeking far higher paid jobs in western European countries as labourers. I think it would be a tragedy if this culture was lost to poverty as farmers without strategies for coexistence with predators would soon turn on wolves and bears, leading to their eradication.

About the Author: Since Paul White’s first visit to Romania in 1993 he has been documenting a wide range of subject material including human ecology and wildlife conservation, with a specific interest in human/predator coexistence. Paul was the former founder and director of Transylvanian Wildlife Project from 2008 to 2014 with the aim of preserving and protecting native wildlife and habitats. For further reading please follow the link to his blog Wild Transylvania.