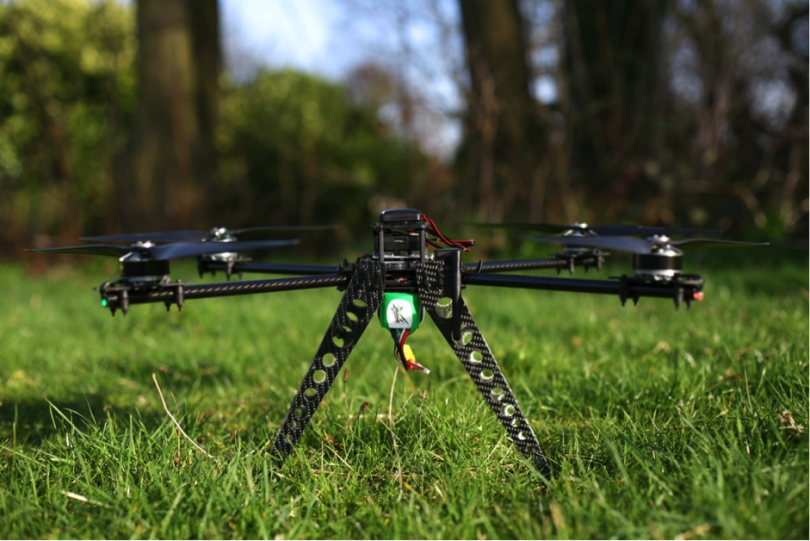 Tom August and Tom Moore, have been investigating the use of semi-autonomous vehicles in relation to bat surveys…

Not all projects have a conventional beginning. This is certainly the case for a four year long investigation combining drones and bat detectors to create a versatile surveying tool for bats.

Late in 2012, university friends Tom August and Tom Moore met at a friends wedding and got talking about their work since graduating. Tom A had recently finished his PhD exploring the social networks and diseases of bats, while Tom M had developed a keen interest in unmanned aerial vehicles (drones). They began discussing the potential of combining the two and wondering what applications there might be. This was the genesis of their project exploring the feasibility of drones as a survey tool for bats.

The aim of the project was fairly straightforward – they wanted to test whether drones could record bat calls. ‘No’, would have been a perfectly good answer.

The pair quickly discovered their quadcopter (a drone with four propellers) produced a lot of ultrasound noise; when placing the detector on the drone, this noise was enough to drown out any other noises of interest. However, when the microphone was separated from the drone by ~5m there was little interference. Suspending the microphone on a 5m long line seemed the obvious solution.

Initial testing showed this wasn’t going to work. Their bat detector (a BatBox Duet) weighed 300g, and attached to the end of a 5m line this weight became a pendulum. The autonomous flight software could not control for the swinging detector and ultimately the drone crashed to the ground. The Tom’s worked on a number of solutions based on stabilising the detector using various methods of hanging, but none fixed the problem. 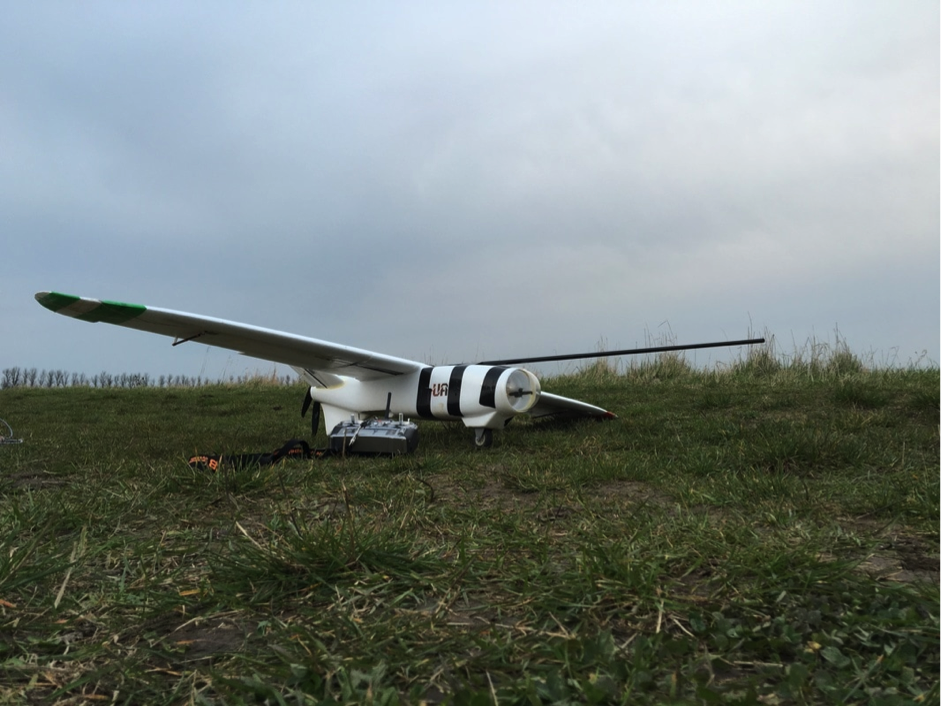 The project, undeterred, turned its attention to planes. Planes have a longer flight time, and can carry a higher load than quadcopters. Just like quadcopters, planes can fly autonomously round a pre-programmed route. While it was anticipated that with only one propellor the plane would prove quieter, the detector had to be placed on the plane at the centre of gravity. This ensured that the plane stayed stable in flight and was located about half way down the length of the plane. The position of the detector put it close to the propellor and so, as with the quadcopter, any interesting ultrasound signals were drowned out by the propeller noise.

All project progress was posted onto the project website as the results came in, this is unlike other projects or academic research where results are only presented at the very end. The ‘open science’ approach allowed bat enthusiasts and drone builders to pitch in ideas and suggestions as the work progressed. Enter Peter Flory. Peter runs Peersonic, a company designing and manufacturing bat detectors, which are much smaller than most, while still recording full spectrum.

The duo were able to attach one of Peter’s Peersonic bat detectors to the wingtip of the plane away from the propeller, which reduced the amount of noise. On an evening of field testing, this led to the first potential bat call. However to show that bat-drones were a plausible survey tool, much more would be needed.

In the survey season of 2017 the team was able to finalise their designs. A new quad was built, using a lighter frame, bigger battery and larger propellers, giving a flight time of up to 30 minutes. A new plane was built to carry bigger batteries and with larger wings, it allowed for slower and longer flights. Finally a boat was bought and fitted with a detector for recording on the water’s surface. 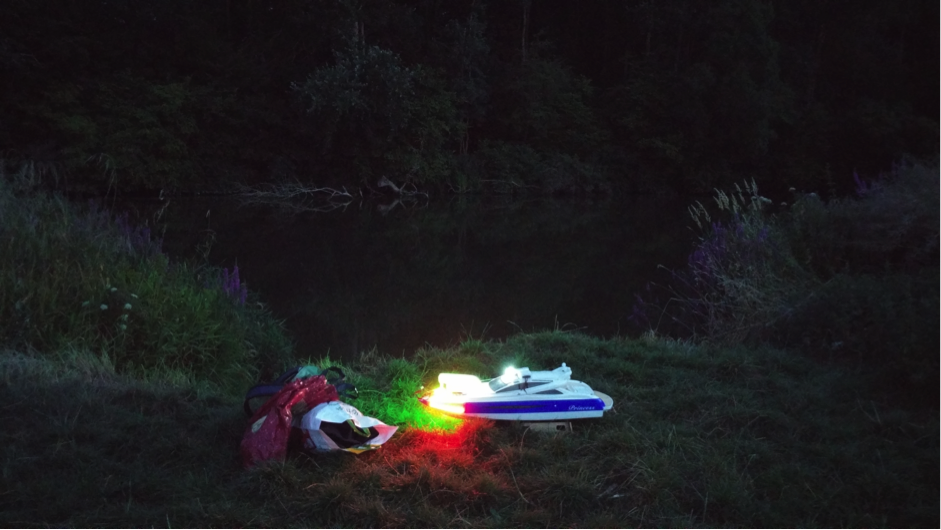 The final quadcopter design was a success. The light-weight bat detector no longer caused pendulum issues and at a distance of 3m, was not interrupted by the sound of the propellers when tested at Scotney Castle in the summer of 2017. Similar success was had with both the new design of the plane and the boat.

As the sonograms show, all three platforms were able to record bats out in the wild, while the drones navigated through the landscape under semi-autonomous control. The boat and plane also boast impressive battery life – the plane can fly for an hour and the boat can be powered for even longer. 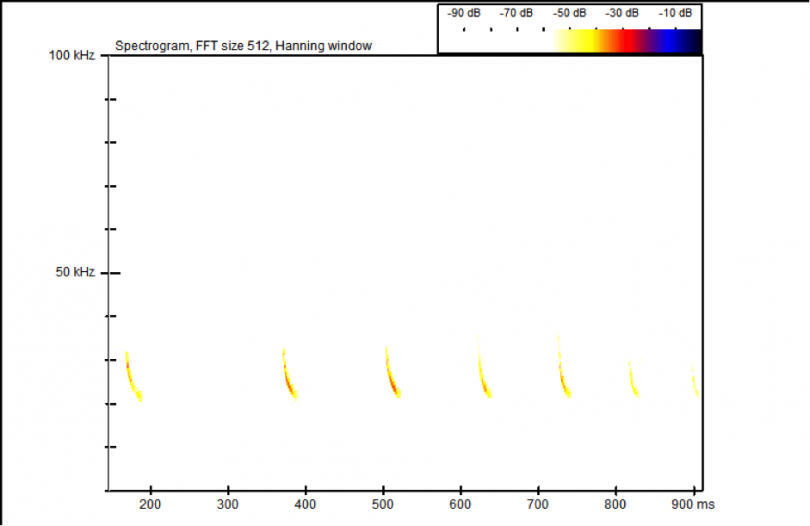 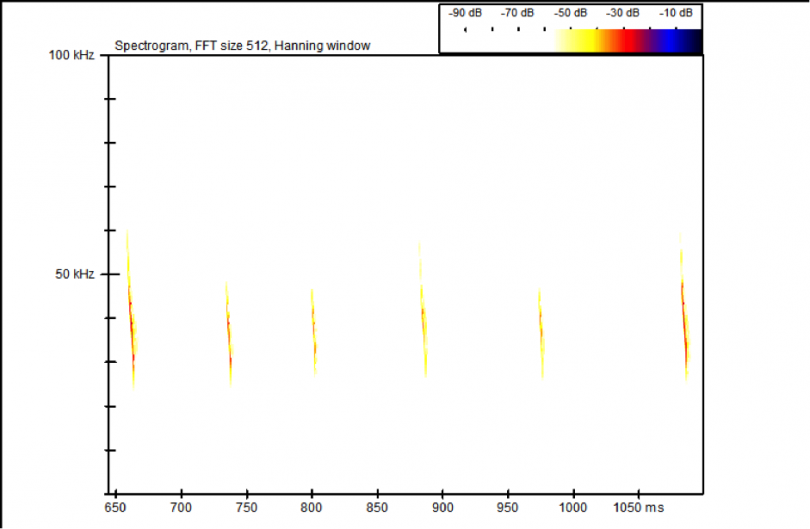 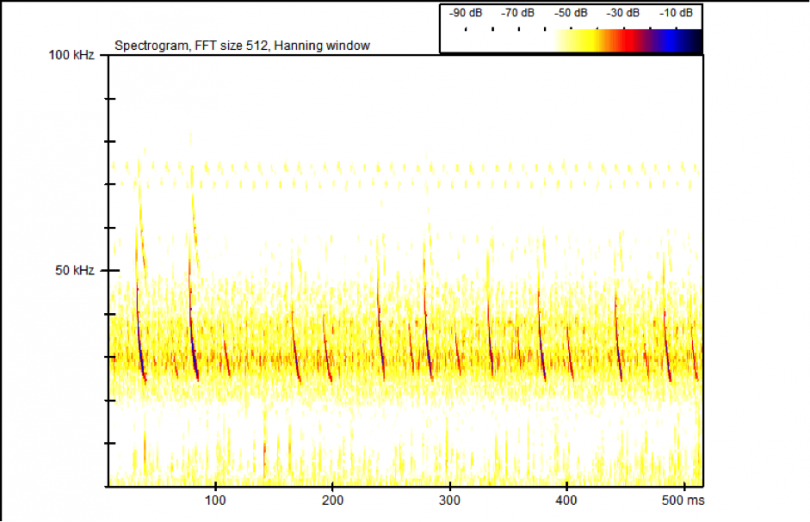 With the opportunity to perform transects at height, the project team suggest that there are many opportunities for future research. Whether over tree canopy, over water, or 100m up, we know relatively little about what bats get up to at height, and these drones could help us to learn more. The drones, particularly the plane, can cover large distances quickly, allowing large scale surveys that, thanks to the computer guidance, could be accurately replicated. In the UK this would be hampered by drone regulations, but elsewhere in the world could allow detector surveys on a whole new scale. Finally, areas that are hard to reach, such as marsh habitat and cliff faces, could be surveyed without putting humans at risk.

While the two Tom’s admit that large scale adoption of drones for monitoring bats is a long way off, they hope that their work has brought us a step closer to fully understanding the ecology of these charismatic animals.

Images: provided by the Authors.

About the Authors:  Tom August studied for a PhD in the ecology of bats at the University of Exeter. Since then Tom has worked at the Biological records Centre in Wallingford where his research focuses on assessing the state of our nature using biological records data at the national scale.

Tom Moore studied chemistry at Durham University before starting a career outside of science. Over the past 5 years Tom has taken a keen interest in drones, developing expertise in the design and construction of a range of semi-autonomous unmanned aerial vehicles.