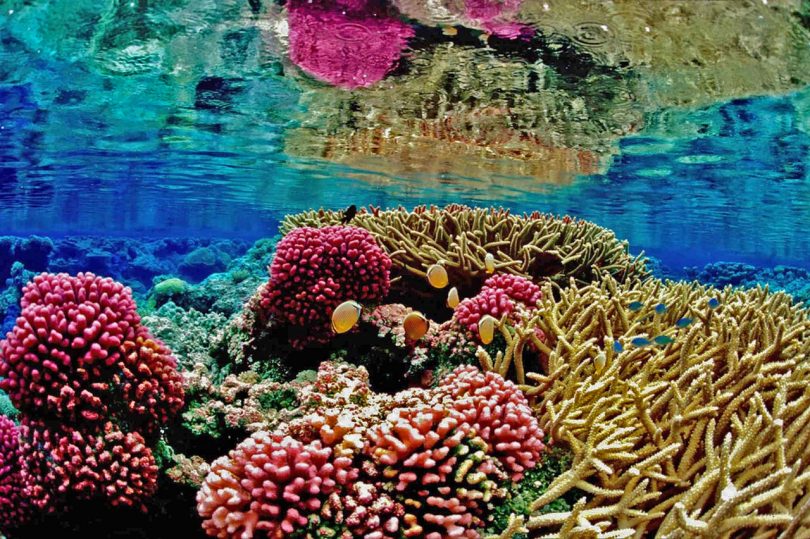 Coral reefs comprise a habitat of immense importance for the species and ecosystem services they support.  Rohnan Milne takes a look at the effects that CO2 emissions are having on coral reefs…

Emissions of CO2 have increased over the past 200 years through anthropogenic activity. Among other things, such activity has taken the form of land development, deforestation and fossil fuel combustion. These activities have increased atmospheric CO2 concentrations by 36%, and it is estimated that one third of all CO2 of anthropogenic origin has been absorbed by oceans (Miller et al, 2009).

In addition to the acidification of seawater through acid rain, CO2 is known to dissolve in the surface water of coral reef systems. Once it is dissolved, CO2 becomes a weak acid (known as carbonic acid), which goes on to become carbonate (CO3 2-) and bicarbonate (HCO3-) ions.

The effects of CO2 emissions on corals and reef systems are known to include acidification of the water, loss of biodiversity, degradation of coral colonies, limited settlement by coral larvae, impaired coral reproduction, restricted growth rates and coral bleaching (Anthony et al, 2008).

A highly simplified description of part of the life-cycle of healthy stony corals is settlement by larvae, recruitment of zooxanthellae and uptake of CaCO3 for the calcification process (building a skeleton). Acidification of surface waters limits the waters’ saturation of aragonite (CaCO3), which is known to positively correlate with coral growth rates (Albright et al, 2008). This reduction in aragonite saturation induces the transition from a coralline environment to an algal one (Kuffner et al, 2008). The slowing of coral growth means that individual mature specimens die faster than they can be replaced, leading to degradation of coral colonies. This effect is made more severe due to the fact that oceanic acidification has been found to disrupt larval settlement rate, which impairs the corals ability to recruit favourable zooxanthellae, reducing the ability of coral colonies to recover (Doropoulos et al, 2012).

Increased CO2 in coral reef ecosystems has been found to result in a decrease in productivity of the zooxanthellae contained within the cell walls of the coral; as 90% of the resultant energy from zooxanthellae photosynthesis is passed onto the coral, this leads to a limitation of nutrients absorbed by the same (Anthony et al, 2008). The same study also discussed the sensitivity of calcifying corals to the acidification of seawater, noting that the corals are unable to calcify properly under acidic conditions. Figure 1 shows a diagram of the process by which CO2 finds its way into the surface water of coral reefs and the effects it has once it arrives. 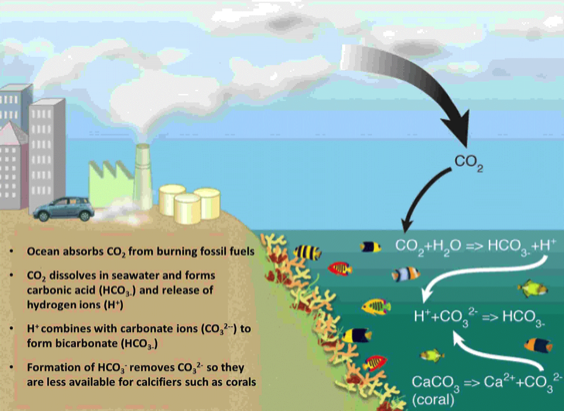 The effects of CO2 emissions are not limited to acidification. Increased temperatures associated with the greenhouse effect are known to induce production of H2O2 (Hydrogen Peroxide) in zooxanthellae, and when this occurs, the coral is blanched and forced to expel the algae, losing the nutrition it provides. Warming also exacerbates acidification (Anthony et al, 2008). Figure 2 shows a diagram of the photochemical reaction that causes coral bleaching. In addition to the aforementioned inhibitions of ecological interactions, Veron (2011) notes that when conditions become intolerably acidic to stony corals and their associated zooxanthellae, the ecosystem begins to favour macro-algae growth, and shows an increase in bioeroder populations, which further exacerbates the degradation of the corals. 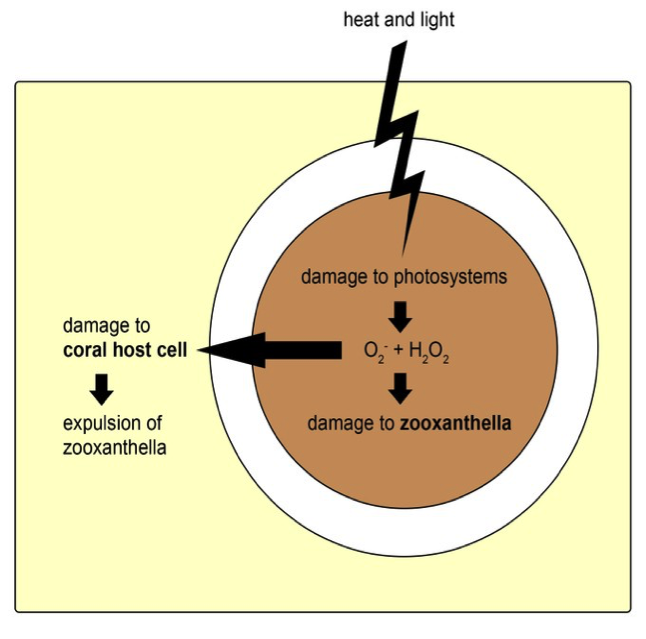 The findings of Coker et al (2009) support this, arguing that a shift from a coral-dominated environment to an algal-dominated one makes coral-dwelling fishes more susceptible to predation even if they survive the bleaching of their coralline habitat. This motivates coral-dwelling fish to vacate the reef; thereby altering it’s dynamic. Acidification of seawater, loss of biodiversity, degradation of coral colonies, impaired reproduction, limited settlement by new corals, restricted growth rates and coral bleaching alter the ecosystem to the point where it ceases to perform the functions it performs when in a state of good health.The effects of the degradation of coral reefs are not limited to corals and zooxanthellae. Research has shown that, in addition to an increase in susceptibility to disease arising from monoculturalisation through bleaching, coral community composition is altered, and this can change the population of the fish and invertebrates that rely upon them for food or shelter, leading to a decrease in biodiversity and therefore a decrease in resilience and the ability of the entire ecosystem to adapt and recover (Reef Resilience Network, 2018).

CO2 emissions are predicted to increase within the next century (Gazeau et al, 2007), and this suggests equal or greater seawater acidification for the future. The research into this field points to the notion that coral reefs may be lost altogether within the next 100 years. If this can be considered fact, then it would mean not only the loss of an ecosystem, but the extinction or forced adaptation of thousands of species that make their home therein. There is also the problem of changing seawater chemistry associated with pollution, as acidification could begin to affect more and more of the earth’s oceans, creating unfamiliar conditions for both marine life and coastal communities.

The Reef Resilience Network (2018) states that over 100,000,000 individual humans are dependent on coral reefs for their survival; it is therefore reasonable to say that the impacts of the effects of CO2 emissions on reef systems are relevant to human society. The economic aspects of coral reefs include tourism and the maintenance of culture of certain coastal communities. The influx of trade associated with tourism on the coral reefs relies on the fact that the reefs are there to be visited, and it is likely that the tourism industry would degrade with the reefs (Nagelkerken and Connell, 2015).

Another thing to be considered is the reliance of communities on the coral reefs for food. Degraded coral reef systems will, as this study has discussed, contain fewer fish than healthy ones; this in turn will reduce the communities’ ability to procure seafood from the region. This would negatively impact on anyone who relied upon fishing as their main source of income and may necessitate communities looking elsewhere for their main food source. On a lesser scale, the degradation of the reef systems will reduce any possibility for humans to extract materials used for medicinal purposes, including scientific researchers.

An environmental benefit to healthy coral reef systems is the protection of coastal regions from erosion associated with storm events and wave action (Queensland Museum, 2018). Degradation of reefs and their failure to recover could lead to an increase in the rates of erosion of coastal zones, where many communities both human and otherwise make their homes. In addition to the risk of loss or abandonment of human settlements due to severe erosion, this could have detrimental effects culturally and socioeconomically.

To manage and limit the effects of CO2 emissions on the ecological interactions of coral reefs, a logical approach would be to limit CO2 emissions. This may be achieved by public outreach, such as the encouragement of hybrid cars and the use of public transport wherever possible. Other methods may call for changing governmental policy, such as industrial incentivisation or taxing in order to make more industries carbon neutral or implementing the use of biomass as an alternative to fossil fuels (Gustavsson et al, 1995).

A more proactive method of managing surface water acidification comes from a suggestion from Harvey (2008). The process discussed in Harvey’s study is to load coral reefs with very finely ground limestone, which would then sink to the bottom of the reef and dissolve, neutralising the acidity of the seawater. This may, however, be a short-term solution, possibly costly and would require repeated treatments to be sustainable. Further research is necessary to make neutralising surface water acidity more practical.

To prevent mass extinction of corals, and if the resources exist and are accessible, zoologists might raise captive specimens of coral to both preserve the species and make it possible to create new coral reefs in ideal conditions, when such a location is found or made.

If it is not possible to remediate the damage done to coral reefs, it will become necessary- especially for those that rely upon them for survival- to seek alternate sources of food and income in preparation for the event of their extinction.

Ultimately, it is the responsibility of humankind to reduce the CO2 emissions that have had such a negative impact on our coral reef systems, which have contributed so very much to culture, coastal economy, cuisine, scientific research and spirituality. Not to mention just how unspeakably beautiful they are. 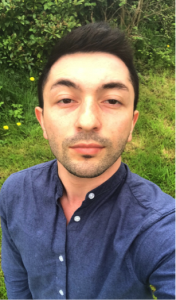 About the Author: Rohnan Milne is an environmental science undergraduate originally from Liverpool, studying in Ormskirk. He has recently finished his bachelors dissertation and is currently preparing for his final examinations, after which he hopes to find work either in an environmental laboratory or in the field of environmental management and consultancy.