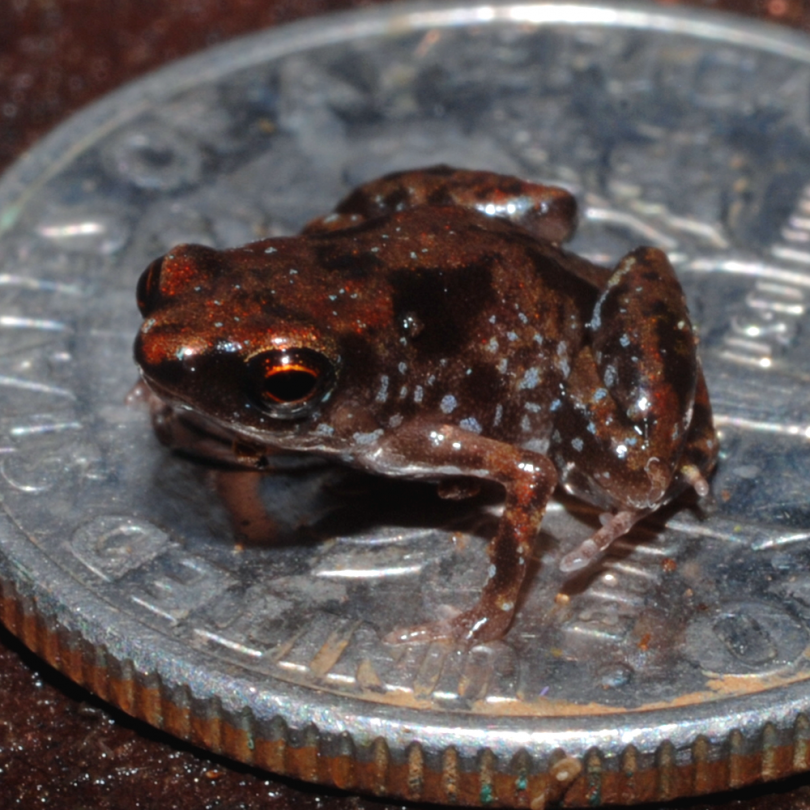 Laurence Jarvis (Head of Conservation at Froglife), takes a look at miniaturisation in amphibians…

Amphibians exhibit vast ranges in body size ranging from just 7 mm long in the smallest known species (Paedophryne amanuensis) to 33 cm in the largest frog (Conraua goliath), which represents a 250 fold increase in size. Different body sizes come with distinct advantages and disadvantages. Large amphibians have fewer predators, a lower metabolic rate, and they can more easily maintain their temperature and hydration than small amphibians. Smaller amphibians, although being more prone to predation, are better equipped to hide more easily, exploit alternative food sources, use physically smaller niches, and attain reproductive ability at an earlier age (Leavy & Heald, 2015). By being very small, individuals are able to fully utilise habitat patches and consume the smallest prey, which are also the most numerous. However, living at such small sizes puts constraints on biological processes and as a result, miniature amphibians have evolved unique features to enable them to function effectively. Many miniaturised frogs have a reduced number of skull elements, fewer digits on their limbs, fewer vertebrae and a reduction in webbing on the feet. Many miniature frogs resemble juveniles and retain many of their features. Indeed, the frog genus Paedophryne, discovered in 2010 from Papua New Guinea, means ‘juvenile form’ and contains some of the world’s smallest frogs measuring just 10.1–11.3 mm (Kraus, 2010). Most miniature frogs from a range of families are usually found in wet tropical forests and live on the forest floor under leaf litter feeding on minute termites, small ants and similar species (Almeida-Santos et al., 2011).

Miniaturisation within the amphibians has evolved independently several times and in many species adults only grow to 20 mm in length. For example, miniaturisation has evolved 8 times in the puddle frogs (genus Phrynobatrachus) of Sub-Saharan Africa (Zimkus et al., 2012). The unusual reproductive mode of many tropical amphibian species has promoted the evolution of small body size. Miniature amphibian species are usually fully terrestrial with individuals laying a small number of relatively large eggs within the leaf litter, which hatch into fully metamorphosed juveniles. For example, the Strabomantid frogs of the Peruvian Andes are fully terrestrial and do not require water to breed. This means that individuals do not need to undergo breeding migrations to water bodies. This promotes the evolution of small body size since individuals are able to occupy very small home ranges (Lehr & Catenazzi, 2009). In addition, the unique physiology of amphibians has allowed the evolution of small body sizes even at high altitudes, especially in the tropics. In many groups of vertebrates there is a relationship between body size and temperature (Bergmann’s Rule) where individuals at higher altitudes or latitudes attain larger body sizes, often as a protection from colder temperatures. However, due to their physiology, which allows them to alter their metabolism for activity at lower temperatures, small amphibian species are able to occupy high altitudes. This removes the constraint of temperature on the evolution of body size and allows species to occupy a greater range of ecological niches even at high altitudes. 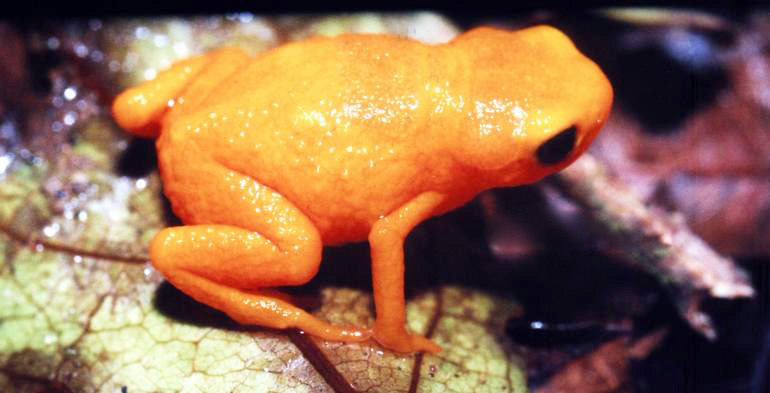 Figure 1. The pumpkin toadlet (Brachycephalus ephippium) from the Atlantic Forest of southern Brazil is one of the smallest known frog species (Photograph: Wikimedia Commons)

In recent years our knowledge and understanding of miniature amphibians has increased due to discoveries of new species and research into their unique ecology. Frogs within the genus Brachycephalus are all endemic to the Atlantic Forest in Brazil (Figure 1). There are currently 35 known species (Frost, 2018) and 19 of these have been discovered in the past six years. Also known as flea-frogs, these poorly understood species inhabit the moist tropical forest floor within this biodiverse hotspot. Growing to less than 20 mm in length, Brachycephalus didactylus, occurs only in Rio de Janeiro state where it is threatened by encroaching human developments and habitat fragmentation. During the breeding season, females lay just two eggs, probably laying each on a different day (Almeida-Santos et al., 2011). Each egg is laid amongst the leaf litter where it undergoes complete development into a fully metamorphosed juvenile frog with no free-swimming larval stage. The eggs of this species are also relatively large, allowing newly metamorphosed juveniles to emerge at a larger size which offers greater protection from predators. 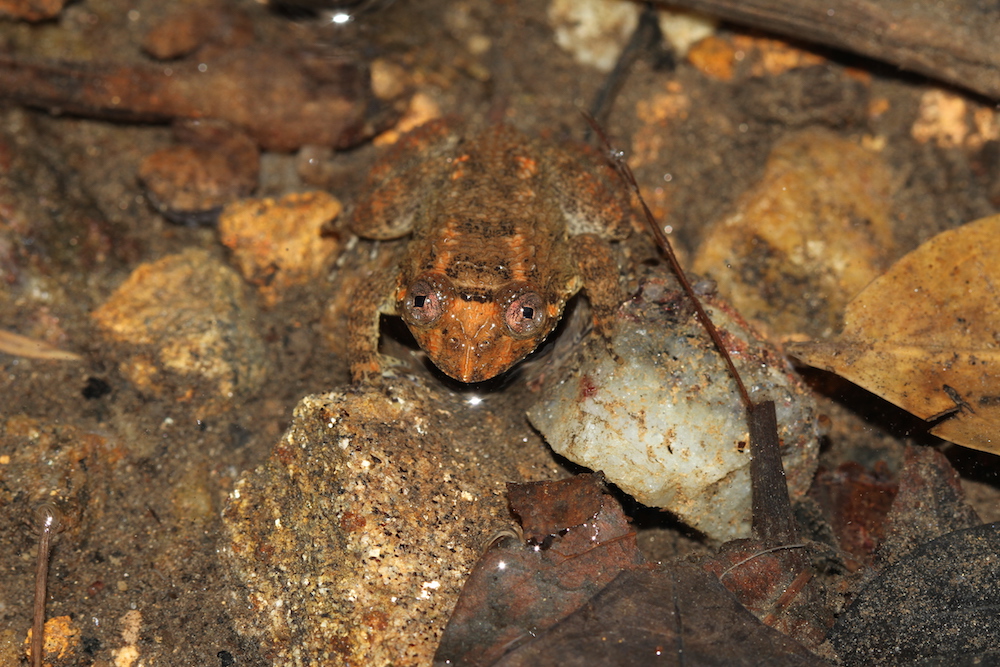 Night frogs, genus Nyctibatrachus, live in close association with mountain streams or marshes in forests of the Western Ghats, India. Species within this genus are extremely small ranging 10 – 77 mm. In 2017 Garg et al. (2017) discovered seven new miniaturised night frog species, four of which are among the smallest frogs in India measuring just 12.2 to 15.4 mm in length. All members of the new species were found under leaf litter or in wet grass near to streams or waterfalls. One male was found clasping a clutch of 10 eggs (Garg et al., 2017). The authors believe that more surveys will discover further new species which will also aid our understanding about the evolutionary advantages of miniaturisation and adaptation to terrestrial life within these and other miniature frogs