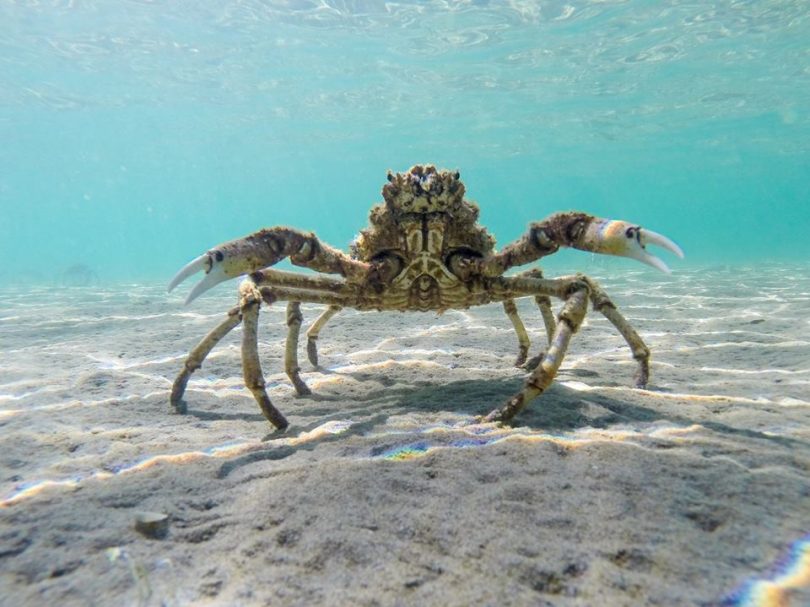 It’s early April. On the Mornington Peninsula, an hour south of Melbourne, the summer tourist swell has dispersed. The serene southern beaches of Port Phillip Bay are now vacant, unrecognisable from recent months, when sun shades and holiday makers dominated the seascape. In the shallow water, metres from shore, a new crowd is gathering; an annual crustacean congregation numbering in the tens of thousands is forming, and they’re going on a march…

For several weeks each year giant spider crabs (Leptomithrax gaimardii) assemble dense chaotic groups in the shallow waters off the coast of Rye and Blairgowrie. These itinerant mass gatherings are in preparation for a coordinated annual moult of the exoskeleton. An astonishing and frenzied natural phenomenon, which was recently depicted in ‘haunting’ scenes on the BBC’s Blue Planet 2. 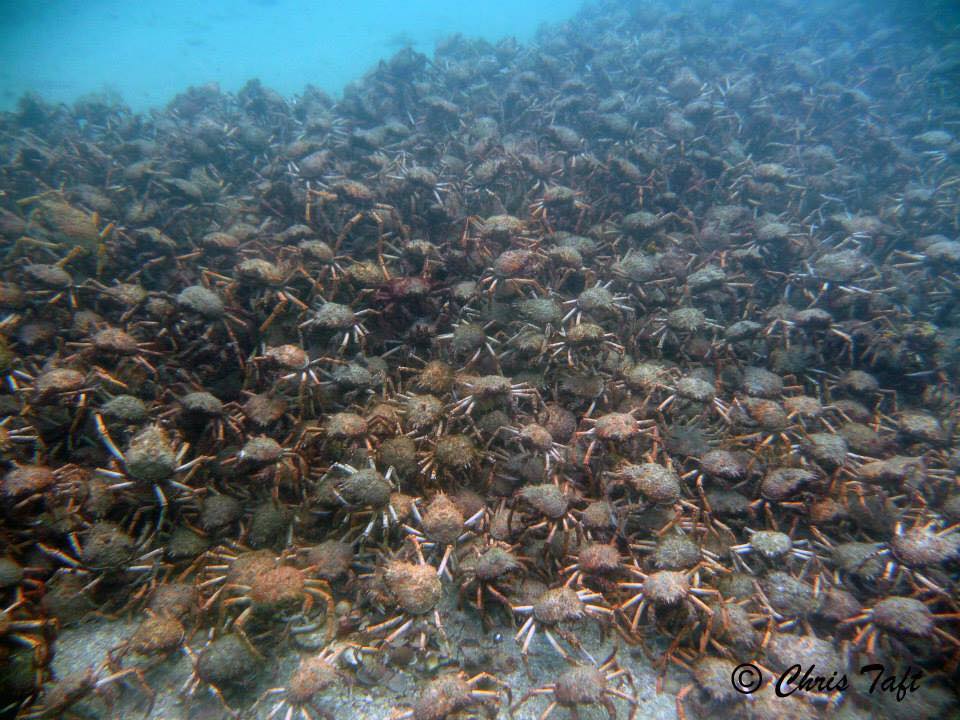 These mysterious benthic invertebrates capable of living to depths of 820m appear, almost haphazardly, from the blue. The writhing assembly of bodies occurs here in the southern part of Port Phillip Bay due to the shallow waters that reach 300m from shore. Dedicated voyeurs gather at vantage points, compelled to witness the spectacle on their doorstep. Stalwart enthusiasts inform special interest Facebook groups of spectacular underwater sightings….then nothing for days. Marching sideways in dense crowds across the sandy sea bed they can disappear as abruptly as they arrived.

This year large gatherings have been reported since early February, when a dolphin tour operator videoed a hectic mass of crawling crabs on the march across the bay. Typically, solitary throughout the rest of their lives, spider crabs occupy habitats from reefs, sea grass and sandy sea beds. Relying on their chitin exoskeleton and the art of camouflage to counter predation from Australian fur seals, bottlenose dolphins and various ray species. They will adorn themselves with fronds of seaweed, whilst their rasping shells provide a substrate for algae, sponges, and sea squirts to colonise. Deceptively mobile, I have observed individual crabs scaling the vegetated pylons of the piers and marinas for shelter.

There is currently no definitive answer as to whether environmental or biological conditions trigger these late summer movements, it is most likely a combination of the two. The full moon at the end of March produced some frantic action beneath the Blairgowrie marina wall, with some experienced onlookers predicting an earlier than usual moult. But in true fashion the gathering didn’t hang around for long before it dispersed to continue marching. 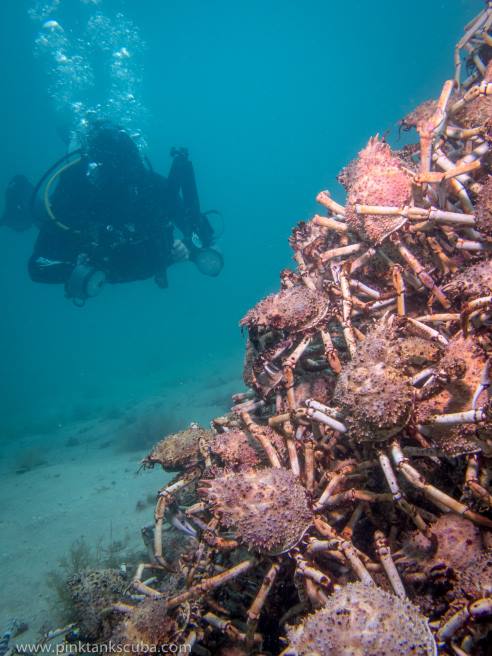 For several weeks prior to moulting the crabs reabsorb calcium carbonate from their exoskeleton, whilst secreting an enzyme separating the epidermis from the existing shell. A new delicate shell is then formed beneath. Eventually the constant marching of the late summer months will halt, usually in early June. The crabs absorb water into their bodies to swell and ease the evacuation. In an almost simultaneous alien-like act, thousands of spider crabs force their soft bodies from the carapace, which cracks open along natural seam lines.

After approximately an hour the newly emerged crabs begin to expand to fill the capacity of the new exoskeleton, surrounded by accumulations of empty shells. It is logical to theorise that these mass gatherings are a case of safety in numbers. As well as being free of camouflaging organisms the newly moulted and soft bodied crabs are an easily consumed delicacy. It takes several weeks for the shell to harden completely and for mutualism between crab and algae to re-establish, being one of ten thousand dining options is key to raising the odds of individual survival.

The thousands of discarded shells will eventually wash up onto the narrow bay beaches, alluding to some sort of a marine massacre. For many of the regions’ residents and visitors, these remains are the only indication of a natural phenomenon occurring metres from shore. Hopefully this year’s marching crowds will receive greater recognition due to their fifteen minutes of fame with Sir David Attenborough.