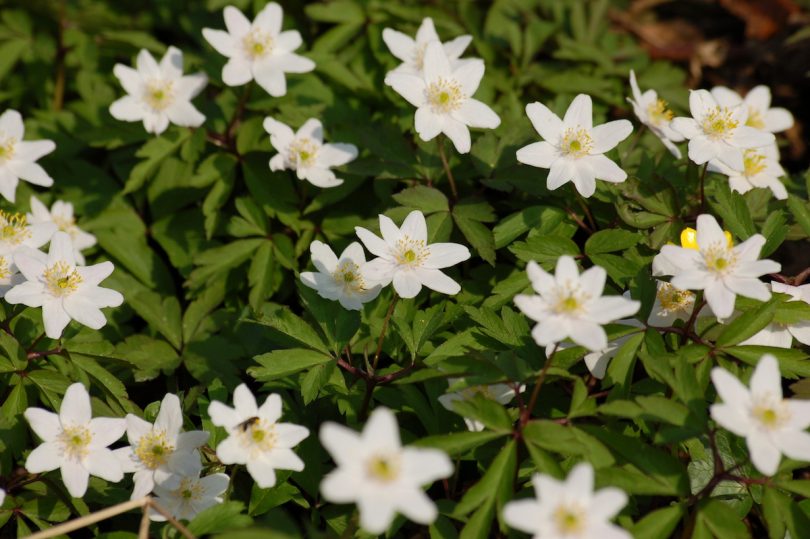 Crowhurst Nature Reserve is a four and a half acre community-owned woodland in Crowhurst, East Sussex, known locally as Quarry Wood.  Paul Johnson is the warden and has been writing a series of articles – Tales from Quarry Wood – for the village magazine since 2008. This article introduces the Reserve and reproduces Paul’s latest ‘tale’…

Quarry Wood was bought by the village for the village in 1999 in order to protect and preserve it. It is jointly managed by the Crowhurst Society and Powdermill Trust.

This beautiful little wood is located at the southern end of Crowhurst, on Sandrock Hill. Its history and shape are inextricably linked to the Crowhurst to Bexhill railway line, which ran through the area from 1902 to 1964. Before then, the road had a much more gentle curve, and there is still a little of the old lane just inside the gate on the left. It is likely that it was the construction of the railway that put the “quarry” into Quarry Wood, with significant sandstone blasting and earthworks required to accommodate the train track. At the southern-most boundary, a striking Victorian brick arch bridge is a reminder of the railway, and the route of the track is evident as indicated by a straight tree-lined corridor. 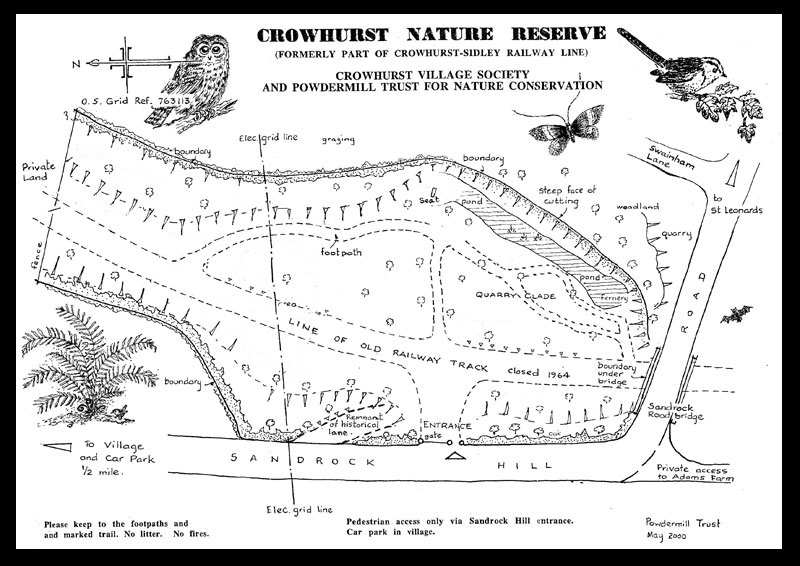 The original site mapping by Powdermill Trust, May 2000.

The Reserve is classed as a newly colonised wood, with most of the trees and plants establishing themselves after the closure of the railway and de-industrialisation, almost untouched since the 1960s. This makes it a remarkable case study in woodland development.

In the last eighteen years, the Reserve has been sensitively managed by a group of local volunteers: clearance to make it accessible and safe; creation of pathways, benches and glades; nature-based community events; and an ongoing species-monitoring programme to gradually build the conservation portfolio. It has a highly regarded fernery and a superb diversity of fungi, the accredited moth list is growing, the pond is measured fortnightly, there is an Ash Die-back monitoring zone, and a new bird-watching area has just been opened up on the top tier. Many different birds fill the woodland canopy, and there is a plethora of insects and pondlife; there are resident rabbits, squirrels and badgers, and signs of foxes and deer passing through regularly.

Whilst I am continuously delighted by the seasonal activities of our Avian beauties in Quarry Wood, I always take time to stop gazing up and peer down into the pond. Last month I caught a glimpse of newts swimming just below the surface and watched hair-like worms undulate along the pond bed. One of my favourite pastimes is to watch the numerous beetles propelling themselves between the clumps of detritus and leaf litter in the clear shallows. 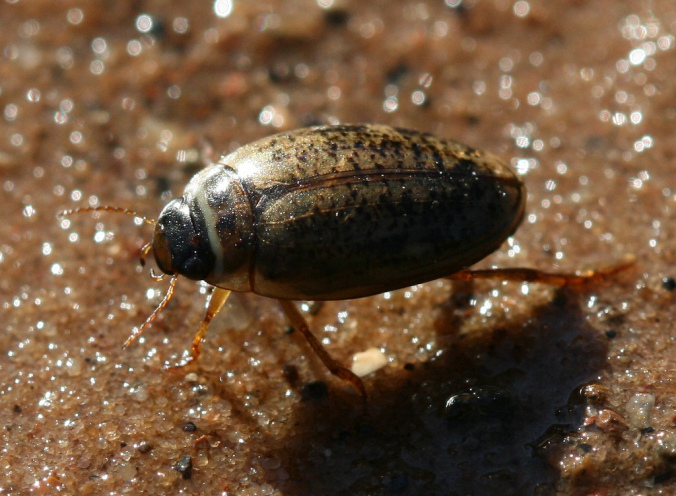 Every now and again these water beetles disappear into one of the fluffy-looking green clouds that are appearing throughout the pond, clouds that are very familiar to aquarium and pond owners the world over. They were the reason that, in the 90s, yours truly spent weeks trudging the hills around Edinburgh and plunging into icy streams. I did not do this to train for a Spartan re-enactment festival, but rather to collect samples of filamentous algae growing on rocks and microscope slides wired to bricks that were strategically placed on the stream beds. 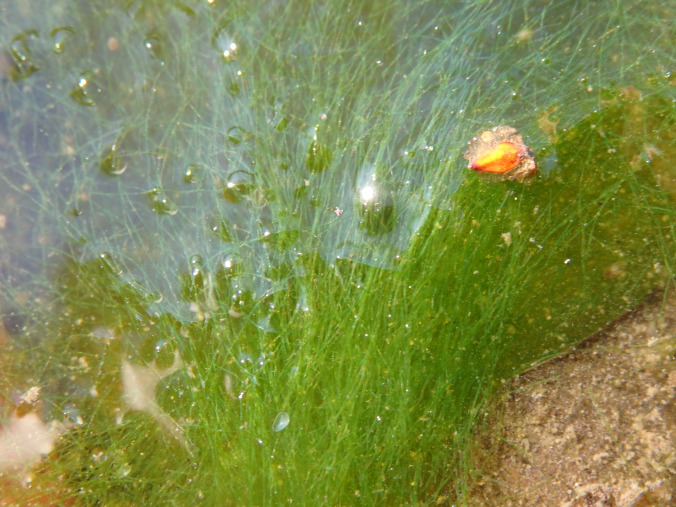 To understand what Algae are, a brief look at the bewildering world of plant classification is required. For our purposes we will place all the organisms in Kingdom Plantae into two rough groups, Vascular and Non-vascular or, as they are known, Higher and Lower or Simple Plants.

Higher plants contain vascular tissue which, as any schoolchild knows, enable water and nutrients to travel around the plant. They also possess, among other things, all the familiar features that we associate with plants, i.e. leaves, stems and true roots. This group contains everything from trees and flowering plants to ferns and Horsetails.

Simple plants, as their name suggests, do not contain complex tissues but that does not make them any less successful. They had existed on land for 300 million years or so before the first flowering plants arrived, and it is thought they may have inhabited the seas for much longer, up to 2000 million years. Amazingly, some of the microscopic, primitive plants that floated in those composite, chemical soups, were identical to those living in our oceans today.

Algae, along with Mosses and Liverworts belong in the group of Simple Plants. In fact, Algae are so structurally simple they are not sophisticated enough to live on land. The more complex species of Algae include most of the Seaweeds, the dominant marine plant. For those of you who remember Jacques Cousteau and his vessel, and mobile laboratory, Calypso, the sight of flowing strands of Kelp waving in the currents will be familiar. Everyone else can look up David Attenborough on the dreaded ‘catch-up TV’! Some of the giant Kelps can grow up to 50m long which is in complete contrast to the freshwater algal species many of which are unicellular and invisible to the naked eye. These come in a startling array of weird and wonderful shapes, colours and sizes.

Numerous species of Phytoplankton, the plant element of the Plankton, are mobile, swimming by means of flagella. Other just drift around in the water column or attach themselves to a rock, or anything else that happens to be lying around underwater. Some species form colonies of cells while others create hair-like strands of a single cell thickness. These filaments often form dense mats on the surface of a water course and can be detrimental to other pond life as deoxygenation occurs.

This problem is taken to the extreme in areas where there is excessive nutrient loading, such as fertiliser-laden run-off entering the water body. Large algal blooms form and block out the sunlight preventing photosynthesis taking place beneath them. Bacteria then break down the dead water plants using up even more oxygen in the process. This whole process, as your younglings will tell you, is called Eutrophication, a glorious word taken from the Greek eutrophos meaning ‘well nourished’; or in this case, force-fed to the point of destruction! 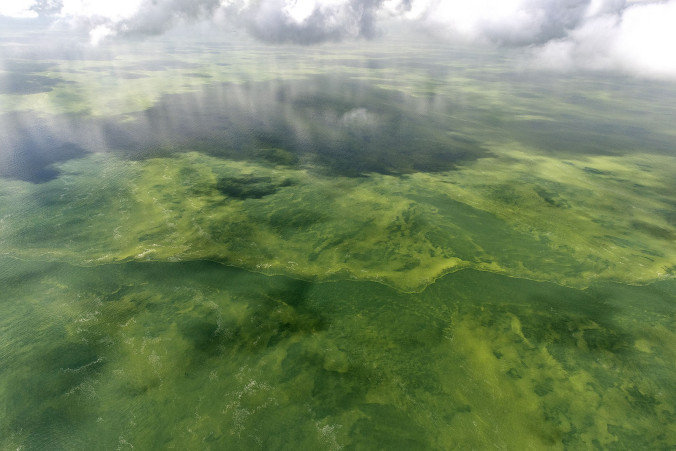 At this juncture it is important to put everyone’s mind at rest on one point, that of the blue-green algae. Every now and again there will be stories of people becoming ill or dogs dying after swimming in water affected by algal blooms. Blue-Greens or Cyanobacteria as they have been renamed are the very first plants. They are primitive to the extent that they are little more than bacteria that can photosynthesise. Actually, this is an enormously important step in the history of evolution, and it would be fair to say that almost every living thing on this planet owes their existence to these tiny organisms. It was the Cyanobacteria that were chiefly responsible for converting the Earth’s atmosphere from being oxygen poor to having free oxygen available for aerobic organisms, like us for example.

Despite this massive contribution to the world and with a smattering of Cosmic injustice, our plants’ earliest ancestors are deemed not to be worthy of Kingdom Plantae and are entrenched in Prokaryotae along with the rest of the bacteria. The reason that Cyanobacteria have had such a rough time in the press is because some species produce a variety of highly unpleasant toxins which are dangerous to both animals and humans. Much research is involved with controlling Blue-Green blooms and warnings are ignored at risk of illness and possibly even death.

However, the little clouds our beetles are taking refuge in are not likely to cause any problem at all. I will continue to take pleasure in watching them and enjoy the thought that I do not have to extricate rocks and slides from icy streams in order to study them anymore.

The biology of algae is a duty, or a task,
That consumes the better portion of your time,
In the sampling of waters from an ocean, or a flask.
Or a snow-field, or a gutter full of slime.
The Biology of Algae, Ralph A. Lewin (1971) 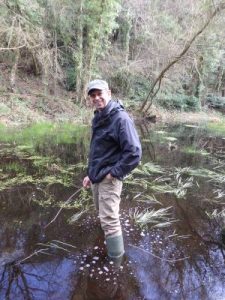 About the Author: Paul Johnson has been energetically involved in Quarry Wood since the start of the project in 2000. He and his wife, Caroline, have lived in Crowhurst for nearly twenty years and both of their children went to the village school. Paul grew up in Bexhill and moved to Edinburgh as a student before coming back to Sussex to raise his family. After years at the Ambulance Service, he now works at St Michael’s Hospice, but his true calling involves getting his hands dirty and his feet wet – he has a BSc Honours in Rural Resources and a Masters Degree in Biology of Water, and volunteering at Quarry Wood utilises this wealth of knowledge as well as fulfilling his interests and hobbies.