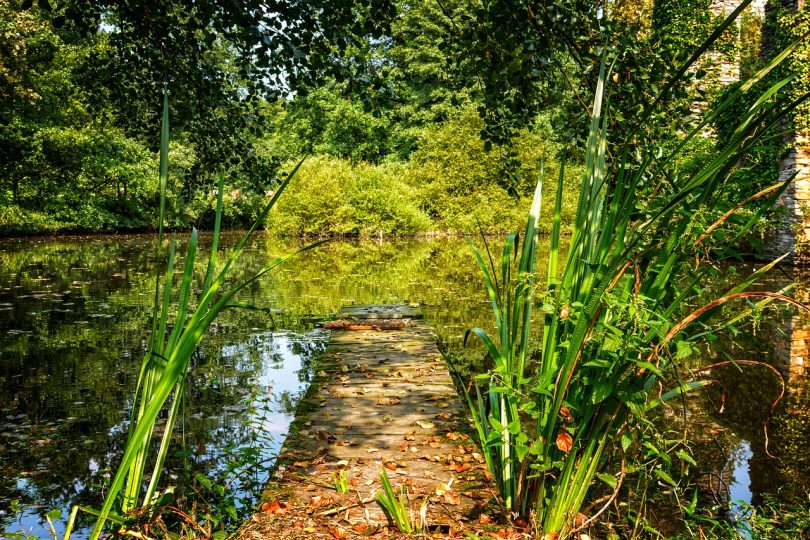 Times are changing in the UK with regards to great crested newt mitigation; in this article, Kat Bruce and Katie Critchlow (Naturemetrics) tell more about their role in testing the new District Level Licensing strategy…

It’s newt season, but not as we know it
About this time each year, ecologists up and down the UK traditionally don their head torches and get out in the dark looking for great crested newts. Meanwhile, developers wait in the wings to figure out what mitigation measures they need to implement on their site to avoid harming any individual newt. This can be a difficult season for all concerned as the window of opportunity for identifying great crested newts is relatively small. Miss it, and a multi-million pound development is held up for another year.

However, big changes are afoot both in the way that newts are detected and also in the way that developers can mitigate their potential impacts. In 2014, Natural England approved an environmental DNA monitoring protocol allowing the presence or absence of great crested newts to be determined by testing water samples for the presence of great crested newt DNA, a method which has been shown to be more sensitive than traditional survey methods. This year has heralded a significant change to the regulations surrounding great crested newt conservation, with Natural England introducing a new strategy known as District Level Licensing. This sees a move from a policy of ‘least harm’ to one that aims to achieve ‘maximum benefit’ by creating and safeguarding a network of great crested newt habitat within a district as an alternative to on-site mitigation. Developers pay into a central fund for regional mitigation as an alternative to funding their own individual mitigation measures.

A key feature of the new approach is the proactive approach to habitat mapping at a regional scale, which generates a heat map of great crested newt habitat suitability. Benefits of this include (1) enabling the development of a district wide conservation strategy, conserving the best habitat in the most appropriate places, and (2) allowing developers to plan ahead, having foresight of their responsibilities regarding newts. The amount that a developer needs to pay into the habitat creation fund depends on the newt habitat suitability of the area in which the proposed development lies. Building on land that is highly suitable for newts requires a larger payment towards habitat creation than building in a low newt suitability area. This gives improved certainty to developers, reducing their business risks and costs and encourages compliance with the regulation. It may also discourage them from building on the most important areas for great crested newts.

Putting district level licensing to the test
In theory, all this allows for better, more connected habitat to be conserved as a priority for great crested newt conservation rather than many isolated ponds in low-suitability areas where translocated newts have a poor chance of long-term survival. However, any new strategy must also prove its worth and demonstrate its ability to better meet the objectives, in this case creating a measurable net gain for newts and contributing towards achieving Favourable Conservation status for great crested newts.

In 2017, a consortium of organisations, committed to making the new regulations work for both great crested newts and wider conservation goals, came together to deliver a pilot project in the South Midlands. The consortium includes two private companies (Environment Bank and NatureMetrics) together with two leading conservation NGOs (Freshwater Habitats Trust and Amphibian and Reptile Conservation Trust). We aim to demonstrate that the new legislation can provide real conservation benefits for great crested newts, setting a high bar for any schemes that follow. Importantly, we also want to show that the scheme can be a win-win for business and conservation by making the scheme easier and more efficient for developers, thus encouraging more developers to engage and comply with important protected species legislation.

In Spring 2017, Freshwater Habitats Trust carried out water sampling at 600 sites across eight Local Planning Authorities in the South Midlands. NatureMetrics analysed the samples for great crested newt DNA using the Natural England approved qPCR test. Approximately 30% of samples were positive for great crested newts, supporting what local specialists had long-suspected: that this region was a nationally important hotspot for great crested newts.

The eDNA data was combined with newt data from local records centres and other sources, and then with environmental data layers describing geology, land use, pond density and climatic variables to develop a model to predict the likelihood of great crested newt presence at any given point in the region. Overall, the model correctly predicted 95% of positive records as falling in areas predicted to have a high probability of great crested newt occupancy. It was also sense-checked by local authority ecologists. The zoned newt habitat suitability map for the region is shown in Figure 1. 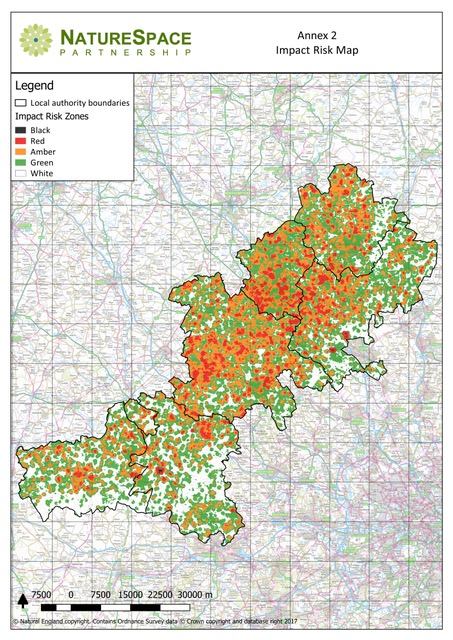 It was very encouraging to see that we were able to create such a successful model for this area, and it also provided a great validation of the quality of the underlying eDNA data.

Towards delivery of a scheme
The consortium has now formed two closely-linked organisations for delivery and monitoring of the scheme in the South Midlands area. NatureSpace Partnership is a private company that works with local planning authorities to set up and administer the scheme to developers, while the South Midlands Newt Conservation Partnership (SMNCP) is a not-for-profit organisation that delivers regional conservation and habitat creation. SMNCP is funded by developers via NatureSpace and led by our two NGO partners, Freshwater Habitats Trust and Amphibian and Reptile Conservation Trust.

NatureSpace and SMNCP are just about to break ground on the first new habitats to be created under the scheme. Alongside conventional monitoring, they plan to continue using eDNA surveys for both newts and other species to provide evidence for the efficacy of the pilot project.

Naturemetrics is now drawing upon our expertise in DNA analysis to help the South Midlands scheme to go beyond compliance. Having stored the DNA from last year’s samples, we are now able to use our industry-leading ‘metabarcoding’ analysis to determine the presence of a range of other species in the 600 locations across the district, For example, we can detect and identify fish species, which predate newts, or test for the presence of Chytrid fungus, a key pathogen. Such data obtained at these scales can radically improve our understanding of the factors that influence great crested newt habitat use and enhance our ability to deliver better conservation outcomes – particularly when combined with the practical conservation expertise of our partner NGOs.

We are hopeful that the project can deliver some real benefits to great crested newt conservation in the UK and demonstrate a new way to regulate and fund biodiversity conservation which is better for both business and biodiversity. We are proud to be a part of it and in particular to be providing the rigorous monitoring required to demonstrate the opportunities and challenges of this exciting new regulation.

About the Authors: Kat Bruce is CEO of NatureMetrics, a UK startup company that specialises in DNA-based monitoring of biodiversity. Kat has a degree in Wildlife Biology from Anglia Ruskin University and a PhD in molecular ecology from the University of East Anglia. She started NatureMetrics in order to make powerful new tools for biodiversity assessment available and accessible to ecologists and environmental managers, and loves working with clients to help address biodiversity monitoring challenges all around the world.

Katie Critchlow, COO of NatureMetrics, spent two years living and working in Jakarta, Indonesia, working on developing a Green Economy plan for Heart of Borneo alongside the three Bornean governments at local and national level. Katie’s role was to engage the private sector, mining, logging, palm oil, tourism and finance and to develop innovative mechanisms for funding conservation and sustainable land use. On returning from Indonesia, Katie studied Environmental Economics at the London School of Economics and is keenly interested in linking large biodiversity datasets from eDNA monitoring to data on economic activity to better understand the links between biodiversity, ecosystem services and natural capital and to inform management techniques which strengthen both business and biodiversity.