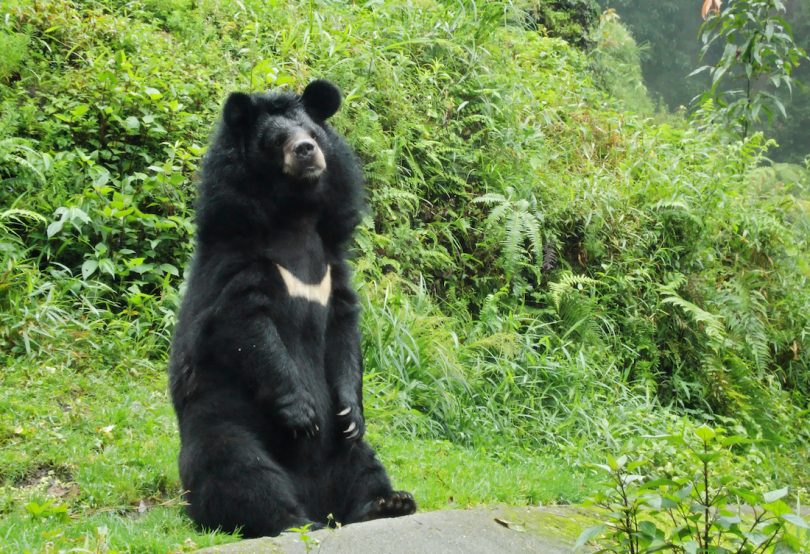 Jenny Cantlay is a UK qualified veterinary surgeon. In this article, Jenny shares her experience of volunteering for the China Bear Rescue Centre…

My fascination for bears started a number of years ago whilst on holiday in Canada, where I was fortunate to see wild black bears in the Rocky Mountains. The short period of time I spent observing these bears gave me some insight into their intelligence, dexterity and inquisitiveness. Therefore, I was disappointed to realise that six out of eight bear species in the world are highly threatened due to habitat loss, wildlife trade and climate change. Living in Asia for five years, with a professional background in veterinary medicine, meant that I was keen to utilise my skills to benefit bear conservation programmes in this region, since four species are found in this continent. Whilst living in Malaysia, I was able to work with sun bears at a rehabilitation centre in Borneo, where they had been rescued from the wild pet trade. On relocating to China in 2014, I realised that this would be a great opportunity for me to gain veterinary experience with the Asiatic black bears. Their populations in China are threatened by both deforestation and the trade of bear parts for use in traditional medicines. I was already aware of a long-established sanctuary for bears rescued from the Chinese bear bile industry, which is run by Animals Asia Foundation and located in Sichuan Province. I subsequently sent them an email seeking an opportunity for voluntary veterinary work. In June 2016, I was excited to make my way to the China Bear Rescue Centre near Chengdu in order to see their world-renowned bear rehabilitation work for myself. 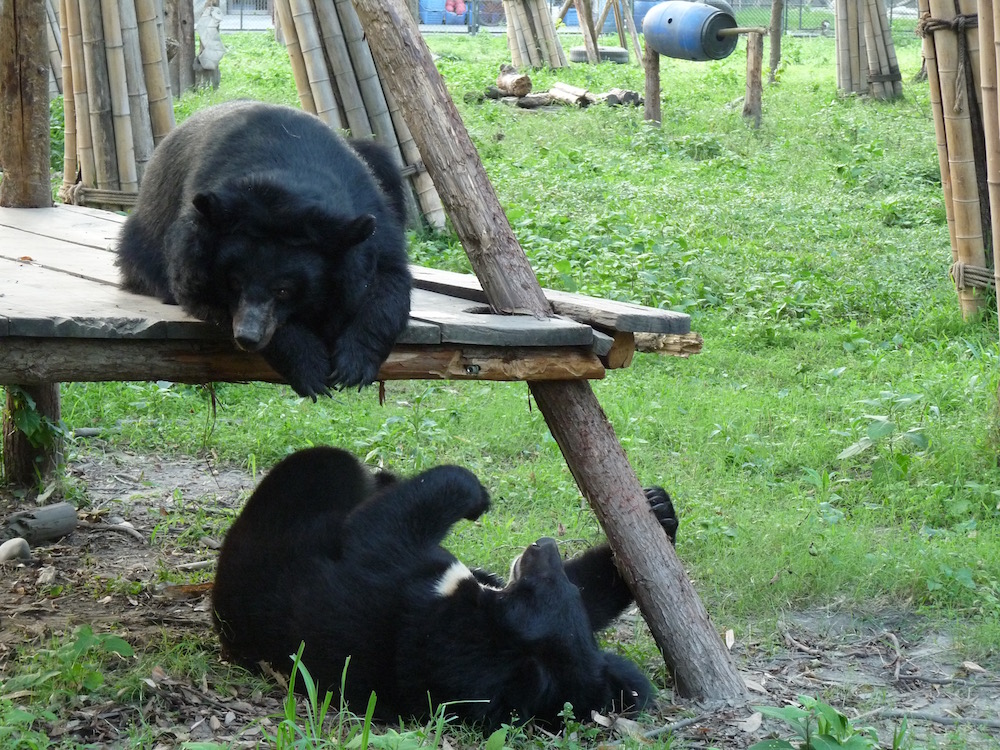 Every animal at this sanctuary has experienced unimaginable trauma from years spent confined in a small cage at a bear bile farm in China. The medicinal value placed on the active compound found in bile (taken from the bear’s gall bladder) makes this liquid a lucrative commodity in Traditional Chinese Medicine, as historically it has been used to treat a variety of illnesses. Despite a synthetic alternative being available and with over 50 herbal products now recognised as being able to effectively treat the same conditions, many people still prefer to use bear bile. The farming of Asiatic black bears for their bile is still legal in China and this industry leads to numerous bear conservation, welfare and disease issues. Each bear has suffered severe mental and physical damage at the hands of humans. Although farms may attempt captive breeding of bears, some have been illegally captured from the wild as young cubs, thus decreasing the wild population of Asiatic black bears. Normally juvenile bears remain with their mother until around two or three years of age, so this early separation and subsequent confinement causes severe stress. Even those cubs born in captivity will have been removed from the female bear when they are only three or four months old, before they are even weaned. The young bears may spend months spent isolated in a restrictive cage being fed inappropriate foods which can lead to stunted growth or deformities.

Regulations state that once the juvenile reaches three years of age and is over 100kg in weight, the process of bile extraction can start, which will continue though adulthood until the bear dies of disease, starvation or injuries. The method of extracting bile from the bear is horribly cruel and the bear remains caged indoors for years, unable to express its normal behaviour and experiencing starvation and dehydration from lack of proper nutrition and water. Consequently, by the time surviving bears are rescued they are usually in a shocking condition, suffering from numerous disease problems, traumatic injuries and abnormal behaviour patterns. The staff at the sanctuary have to use their considerable expertise to provide a new life for these bears in captivity. 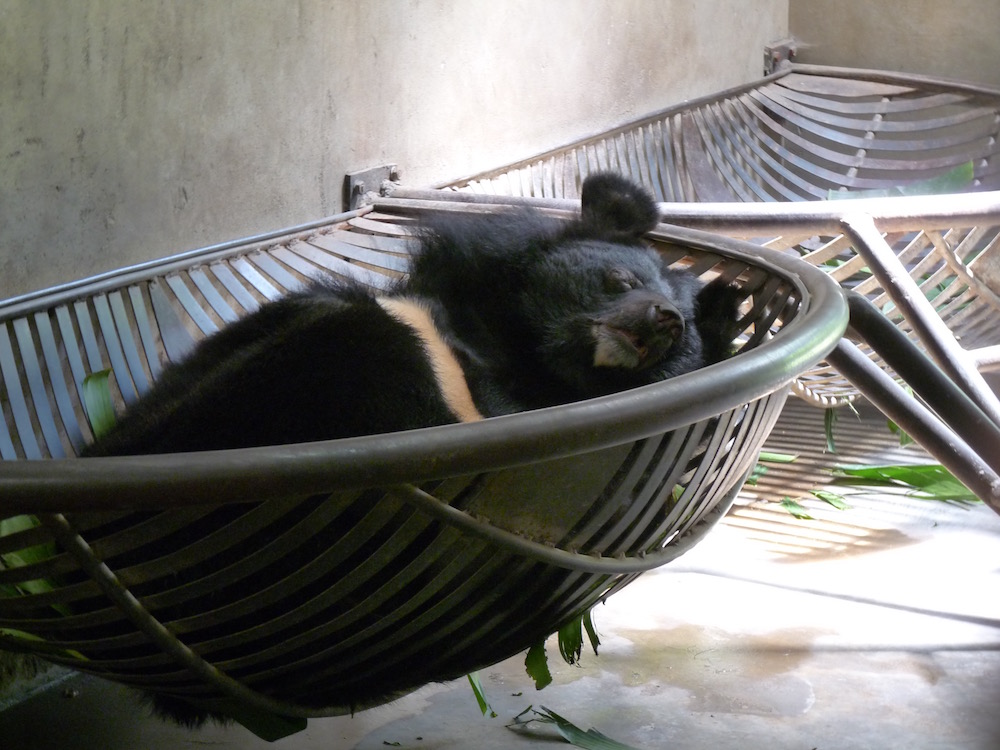 On my arrival at the centre, I was impressed to see the spacious forested enclosures that provide a natural outdoor environment for its one hundred and fifteen resident bears. The bear managers were responsible for making sure that these smart animals had plenty of physical and mental stimulation in the form of climbing frames, hanging tyres, hammocks and enrichment items filled with food or interesting scents. Bears in captivity can easily get bored and frustrated, which can lead to abnormal behaviours and so the managers organise a comprehensive environmental enrichment programme designed to encourage a natural repertoire of behaviours. They supervised the daily feeding schedule and rotation of enrichment activities in order to provide the best conditions for the rehabilitation of the bears.

Another problem is that bears do not naturally live in social groups and keeping unrelated bears together in captivity is an artificial arrangement, which can increase bear tensions. A great deal of time is spent observing the bears in order to monitor their individual health and welfare, and assess relationships between bears. This information is useful to help determine feeding strategies, social arrangements and the holistic care of the bears.

The main purpose for my visit was to spend time with the veterinary team to understand how they improve the health of the bears. I was warmly welcomed by the resident vets, Eddie, Sheridan, Max and senior nurse, Wendy, who showed me around the modern hospital facilities and explained the schedule. My activities involved assisting in making up their daily medication (mixing doses with rice congee shakes or inserting pills into marshmallows), walking around with the vets to observe the bears in their dens and helping in the health checks. I was both thrilled and slightly nervous at the prospect of getting up close to the bears, since an adult male weighing up to 200kg demands serious respect. However as veterinary surgeons, we do have the advantage of being able to anaesthetise wild animals before handling them! Clearly this is the only method to safely examine bears up-close and during my time there, I saw exactly how the vets anaesthetise them for the health checks. 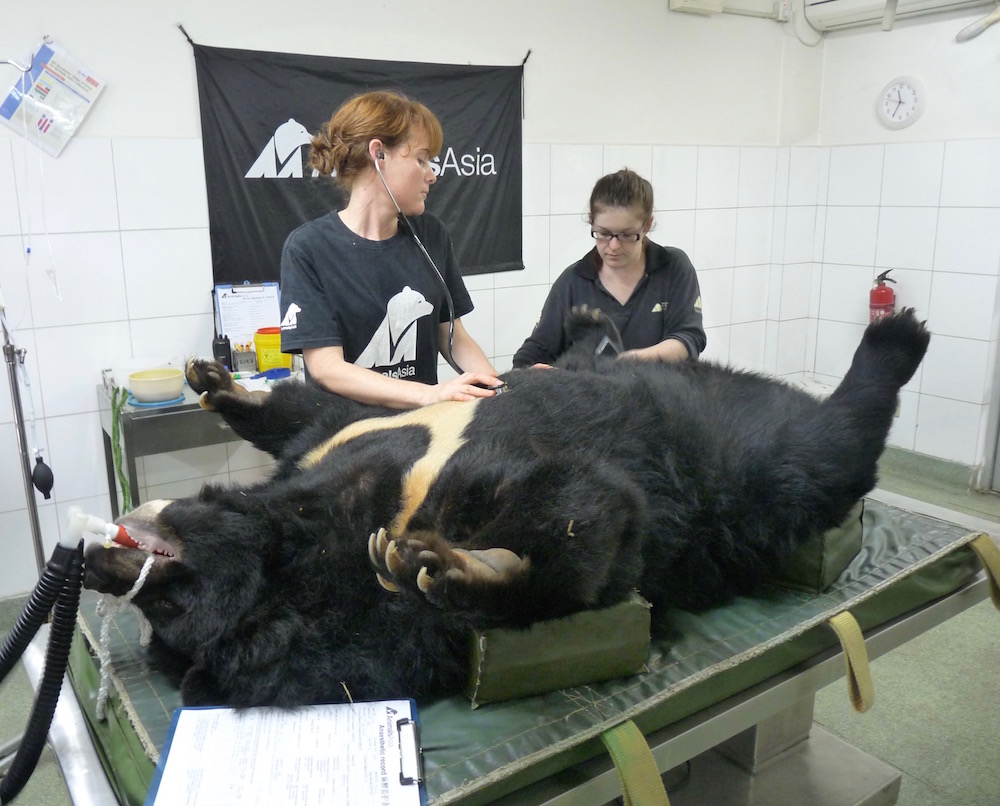 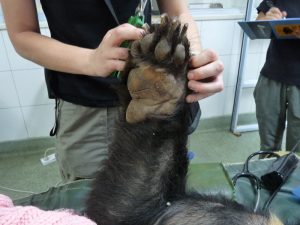 Eclipse was conditioned to be loaded into the transport cage using positive reinforcement in the form of favourite food. She was brought to the hospital by the experienced moving team where she was then welcomed with more treats and remained there overnight to calm down before the anaesthesia the following day. The next morning, Eclipse was distracted with treats, which allowed Sheridan to approach her and jab her muscle with an injection of anaesthetic. Easier said than done! The speed and accuracy of the vet giving the injection was vital to ensure a safely sleeping bear. The team regularly checked her whilst waiting until she was fully unconscious before removing her from the cage. Of course, moving an anaesthetised bear is not easy and it required the moving team to help, meanwhile I just kept out of the way until the bear was on the theatre table. Then Eclipse’s massive head was lifted up, allowing Sheridan to see inside her mouth and put a tube down the airway for anaesthetic gas to be given. I moved closer to the bear and felt a shiver of excitement as I touched her paw, which was more than twice the size of my own hand. Then the team swiftly got to work, with each member being responsible for certain aspects of the health check. Whilst Wendy monitored anaesthesia, I helped Max give Eclipse her fluid therapy, collect blood, urine and fur samples, then clip her claws.

Meanwhile, Sheridan examined her from snout to tail to look for any obvious problems. Each bear has its own detailed medical record, which allows the vets to check up on any ongoing conditions as many bears have heart, liver, joint and dental diseases related to their experiences in the bile farms. It was important to obtain as much information as possible from the anaesthetised bear, which involved analysing biological samples and imaging her body. Eclipse had previously been diagnosed with an enlarged heart and radiographs of her chest were repeated to see how well she was responding to the medication. Since all previously extracted bears have previously undergone surgery for the removal of their damaged and infected gall bladders, Sheridan also needed to examine her abdominal organs using ultrasound to check for further disease. Fortunately, Eclipse’s health check was relatively short and did not discover any new problems. She swiftly recovered from the anaesthetic and was back to her usual self the next day. 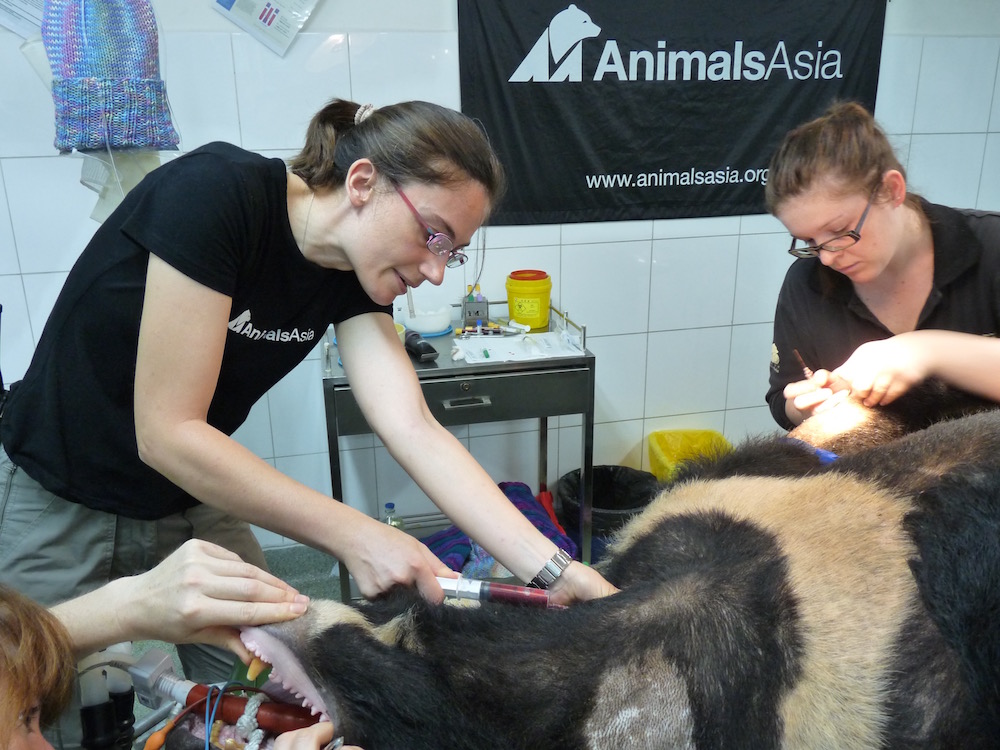 The significant number of geriatric bears at the sanctuary means that some health checks unfortunately reveal the presence of terminal disease. Research by the centre has found that bears farmed for bile are predisposed to developing cancers in their liver and biliary system, which rapidly spread elsewhere in the body. During my second week, the vet team sadly discovered that Luna’s poor appetite was due to inoperable liver cancer and she had to be euthanised under anaesthesia. She was buried later that day in the cemetery and the staff paid their respects to this well-loved and gentle bear.

Although the staff are deeply upset by the loss of each bear, they know their efforts have been worthwhile and have given these traumatised bears a better quality of life. From my short time at the centre, it was clearly apparent that every bear receives the highest level of health care from this dedicated team of people. Furthermore, the medical and behavioural data collected from bears at the rescue centres in China and Vietnam provides valuable scientific evidence to support the animal welfare argument that bear bile farming is unacceptable. Animals Asia Foundation is also working with the traditional medicine communities to promote the use of alternative options and raising public awareness to reduce the demand for bear bile products in Asia. The organisation actively engages with government leaders and policy makers in both China and Vietnam in order to gain support for ending bear bile farming. Their work goes beyond simply considering the welfare of individual bears and tackles the bigger picture of changing cultural attitudes to bear farming in this region.

Having lived in China, I remain hopeful that Animal Asia Foundation’s mission will appeal to the younger generation of Chinese citizens who will demand changes for the benefit of bears.

How you can help – to learn more about Animals Asia Foundation’s work to end bear bile farming and how you can support them, follow the link HERE. 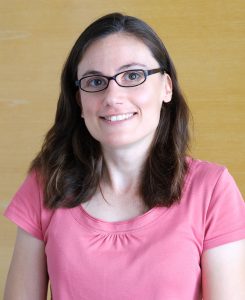 About the Author:  Jenny Cantlay is an experienced British veterinary surgeon who lived in Asia for over 5 years.  She was awarded a Masters in Conservation Medicine from the University of Edinburgh in 2015 and is particularly interested in how knowledge of wildlife disease and ecosystem health can be applied to conservation issues faced by Asian countries undergoing rapid development, especially associated with habitat destruction and wildlife trade.

Whilst living in Kuala Lumpur, Jenny collaborated with TRAFFIC Southeast Asia to develop a Master’s thesis that examined the factors driving the wild meat trade in Malaysia and its potential consequences for wildlife populations and human health. The review paper of this research has been published in the EcoHealth journal, which highlights the importance of devising conservation and public health strategies to reduce the trade of wild meat. The link to this article can be found HERE.  Jenny returned to the UK this summer to start doctoral studies within the theme of biodiversity and ecology under the London NERC-funded Doctoral Training Programme.