Home » Green roof poll 1 – Do the public think green roofs are about nature or engineering? 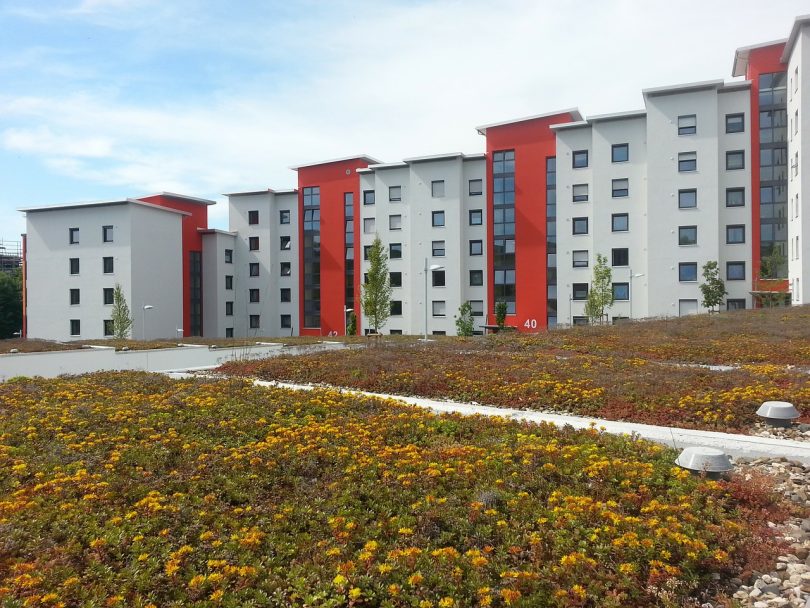 Dusty Gedge, founder of independent advisory organisation Livingroofs.org, has undertaken the first of a series of Twitter polls looking at green roofs.  In this article, Dusty discusses the findings of the recent poll… 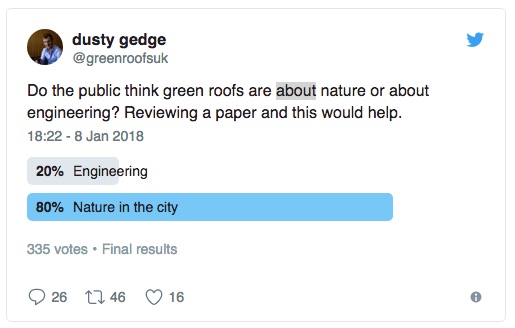 Green roof poll
Obviously green roofs are more than just about nature, both from a technical and an environmental point of view. Most direct comments/replies on twitter to the poll stated a need for a third answer – both. Yet the #twitpoll aimed to gauge the perception of green roofs not the technical aspects. And it appears that the public goes for nature.

That suggests many people who took part already had a degree of knowledge about green roofs. However, in our 20 years of involvement in green roofs, technically it is the engineering concerns that take precedence over the delivery of nature.

One particular reply (see below) suggests the need for another poll. 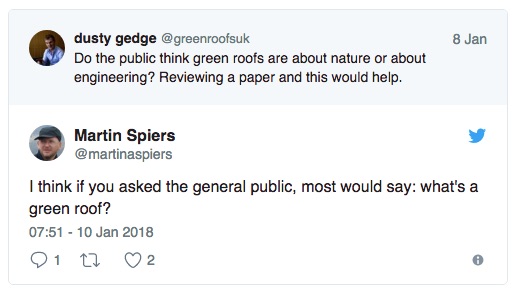 Scientific research into green roofs – where’s the focus?
A recently published paper suggests there is far more research into the engineering benefits that a green roof delivers rather what they can offer to nature. In many jurisdictions the issue of how to retain stormwater in urban areas is driving the delivery of green roofs. Energy and urban heat island are other important issues affecting cities that green roofs help to resolve. So not surprisingly, these areas of interest figure highly in global research on green roofs. But what of nature? The research shows that there is relatively little research on the topic of nature and green roofs. In fact only 3% of peer reviewed papers deal with biodiversity. Whilst a public perception of green roofs appears overwhelmingly to be about nature, research is just about scratching the surface of the topic.

Should green roof research be more focused on nature rather than engineering?
Whilst nature is priceless to the public, it is sadly considered by many in the financial world as, perhaps, worthless. It is still difficult to put a real meaningful economic value on nature. Many in the nature conservation world resist putting a price on nature. The initiatives Natural Capital and Ecosystem services are developing approaches to valuing nature and are here to stay. Whether they are the right way forward is not for us to say. But in time they may make the financial world find some value in nature. Until then though engineering concerns are likely to dominate the green roof research arena rather than nature.

A green roof poll on twitter is just a snap shot. Yet it raises some interesting questions. So to round up, which of the two images represents a green roof designed for engineering concerns and which was designed for nature? Of course they are the same green roof.Yet engineering led the original design. Nature led the redesign a year later. And we are pretty sure the public will like the one that was designed with nature in mind.

About the Author: Dusty Gedge is a recognised leading authority on the design and implementation of green roofs, co-author of a guide to good landscape contracts and the Small-Scale Green Roof DIY Guide. President of the European Federation of Green Roof and Wall Associations, director of the Green Infrastructure Consultancy and founder of independent advisory organisation Livingroofs.org.   Dusty can be found on Twitter @greenroofsuk. Dusty’s design work is run through his consultancy: Green Infrastructure Consultancy.