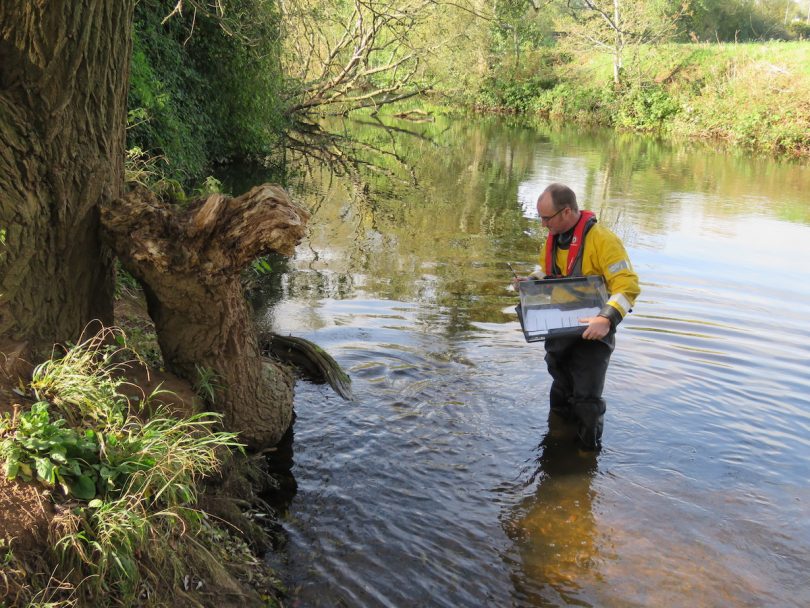 Dr. Peter Walker (Principal Aquatic Consultant, RSK), takes a closer look at the European Eel (Anguilla anguilla) – providing further detail on this illusive animal, and a focus on its decline…

Tom Fort, in his fascinating ‘The Book of Eels’, writes, “It is a creature of mystery, the freshwater eel, with few admirers and fewer friends.” He is not wrong.

Everyone knows what an eel looks like, and most people describe them in unflattering terms. However, eels are, without doubt, a truly intriguing species of fish. Their life cycle and migrations are the most fascinating of any species living in UK waters. However, there are still huge gaps in our knowledge of this species’ basic ecology and life cycle that must be filled if we are to address its critically endangered status. 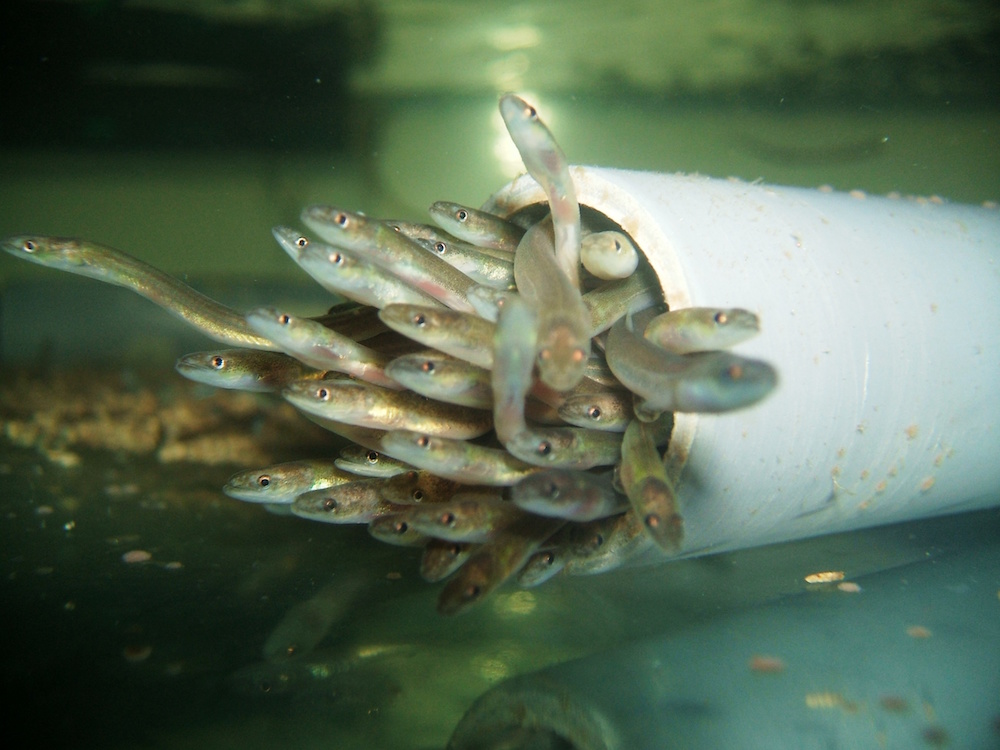 Eel life cycle
The life cycle of an eel is complex. As eels mature, they undergo several physical and physiological changes to prepare themselves for a massive migratory journey out to sea and across the Atlantic. Some of these eels will live in freshwater rivers and streams, lakes or ponds, and others will be in estuarine or marine coastal waters. The freshwater yellow eels, so called because of the yellowish tinge to their bellies, change from having brown backs and yellow/white bellies into a much darker, almost black fish with a silvery-white underside. Their eyes enlarge and they stop feeding. Females tend to live longer than males and, as such, are notably larger in size.

During a dark, moonless night, sometime in the autumn, and usually during a period of heavy rain and high river flows, these eels will start to move en masse. The eels head downstream where they enter estuaries and then move into the open sea. They cross the Atlantic until they reach the Sargasso Sea, off the coast of the southern USA – a phenomenal journey of about 5000 km. 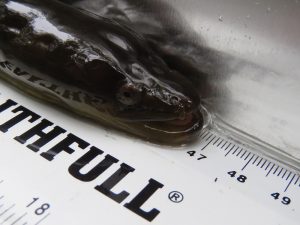 What happens when they get there is a mystery, as no one has yet seen adult eels mating or giving birth here. Eels must spawn in this area, as miniscule larval eels, thought to be just a few hours old, have been found here in great numbers. These larval eels drift on oceanic currents as leaf-shaped leptocephali and eventually reach the coastal waters around North Africa and Europe, sometimes as far north as northern Norway. By this point, they will have undergone metamorphosis several times ultimately becoming a very eel-like, but virtually transparent creature referred to as a glass eel. Glass eels then disperse between coastal and estuarine habitats with many individuals moving together in huge numbers into freshwater stretches of rivers, often using the power of the incoming tide to give them a helpful push.

During this period, glass eels undergo yet another metamorphosis, most obviously observed in the change from a predominantly transparent creature into a pigmented yellow-brown elver. These 10cm long elvers disperse throughout their chosen habitats and reside in freshwater rivers and streams, lakes, estuaries or coastal waters for 8–10 years for males and about 15 years for females. There are many reports of eels living much longer than this however, with one reported to survive in a Swedish well until it was over 155 years old. 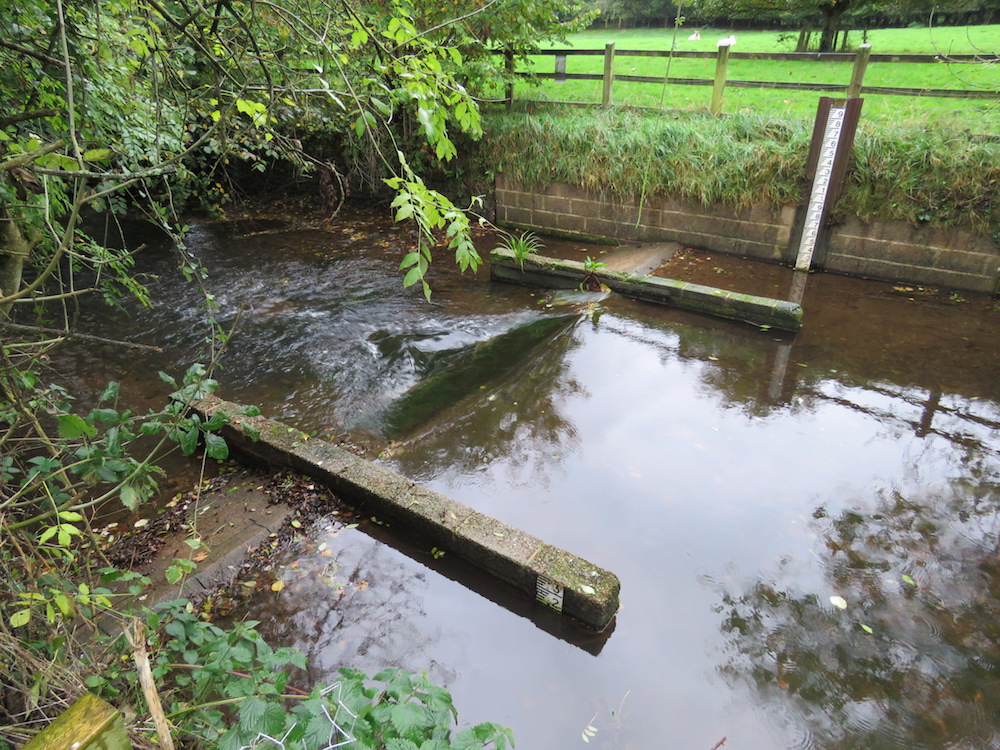 The eel crisis
During the last few decades, the global European eel population has undergone a catastrophic decline, with numbers estimated at just 5% of what they were in the 1970s, before the population crash. A similar trend has been observed with the American eel (Anguilla rostrata) and the Japanese eel (Anguilla japonica). Recent evidence suggests that this decline is ongoing and the European eel is included on the International Union for Conservation of Nature’s Red List as a critically endangered species (ICES, 2015). For a species that has been reported as previously accounting for 50% of the freshwater fish biomass in the UK (May and Marshall, 2008), this is concerning for a whole host of predator and prey species that are linked within an eel’s food web. Furthermore, it means that we have lost a valuable food resource.

There are many reasons cited as possible causes or contributory factors to the eel decline, including global climate change, changes in oceanic current patterns, over exploitation, habitat loss/degradation, pollution, parasitic infections, man-made obstacles in rivers, and entrainment/impingement at water abstractions. Notwithstanding this, the simple fact remains that no one really knows the cause of the decline. 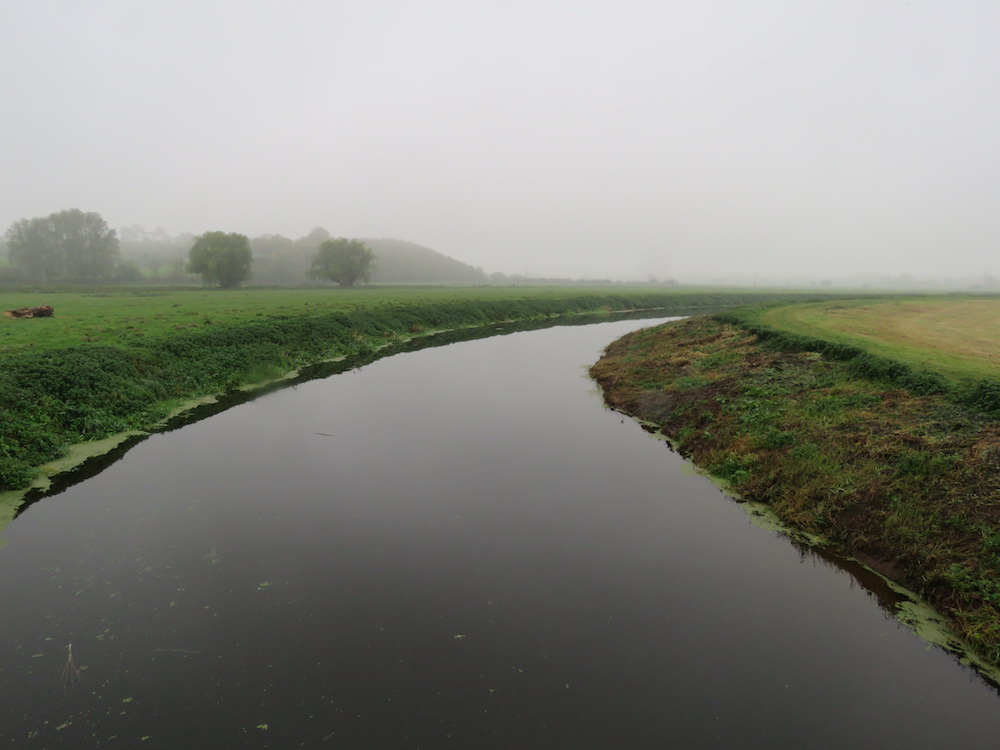 What is being done?
With European eel stocks considered ‘outside of safe biological limits’ (ICES, 2006), the European Commission (EC) brought in a regulation in 2007 to help recover eel stocks to a more sustainable level. This regulation requires each European member state to establish national eel management plans that include measures to help increase the numbers of adult (silver) eels leaving inland waters to cross the Atlantic to spawn at the Sargasso Sea.

In the UK, this EC regulation has been transcribed into law as the Eels (England and Wales) Regulations 2009. This has provided the regulators, the Environment Agency in England and Natural Resources Wales in Wales, with powers to insist that others undertake measures to protect eels.

To date, most efforts have focused on installing eel passes to aid upstream migration of eels in rivers and installing screens or other technologies to prevent or reduce entrainment/impingement of eels at water abstractions. There have also been restocking efforts in some places.

While such measures will undoubtedly offer some assistance and protection to eels, they often do not consider the habitat upstream or downstream of where these interventions are planned. If the habitat is of poor quality or completely unsuitable for eels, there is a strong argument for redirecting resources to sites where benefits could be much greater. Furthermore, there is growing support for habitat creation or enhancements that could facilitate the recovery of European eel stocks. 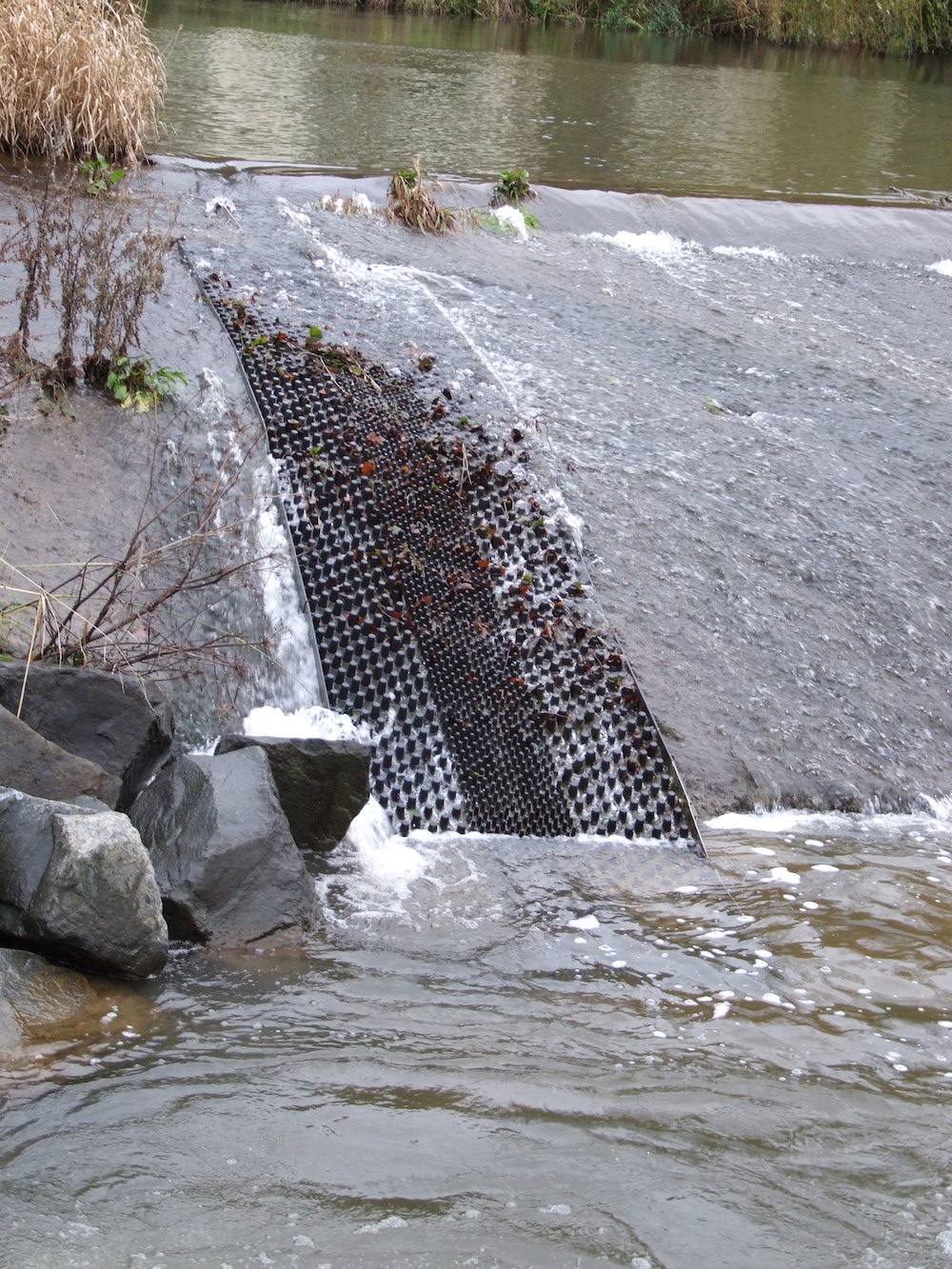 Where do eels live?
If you ask members of the public where an eel lives, they should be able to give you some kind of answer: rivers, the sea and, perhaps, ponds or lakes. Some may have stories of eels living in polluted canals and ditches or rank drains and sewers. It was somewhat surprising, therefore, that when I asked a room full of fisheries experts at an Institute for Fisheries Management conference what constitutes good habitat for eels, I was met with silence.

The silence was not entirely unexpected. Eels have historically been so abundant and ubiquitous in their occurrence that few people had ever really thought to study the species’ ecology in much detail. No one has therefore established whether eels have specific habitat needs or preferences. For any species whose future survival is in question, it is imperative that we have a good understanding of its habitat needs.

The fact that European eel can be found in almost any aquatic habitat complicates the situation. This ubiquitous distribution has led to the belief among many that this species does not really need anything specific, except water, to survive. Recent desk- and field-based research undertaken by ecologists at RSK, however, suggests that this is not the case.

Based on evidence from previous scientific studies and observations during eel surveys undertaken by RSK ecologists, it appears that different-sized eels exhibit variances in terms of preferred habitat. Furthermore, the distribution of eels in freshwater is influenced by the distance from the tidal limit, with larger eels typically being more dominant with increasing distance from tidal reaches of river systems. 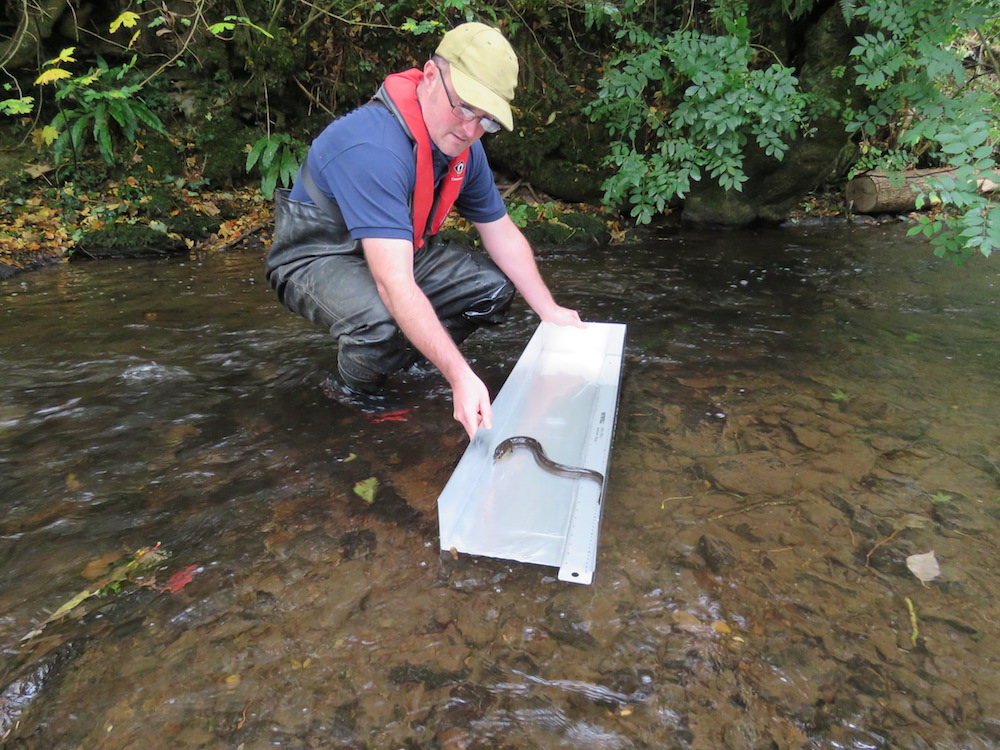 Factors such as water velocity and depth appear to have some influence on eel presence, with evidence to support a preference by smaller eels (less than 300-mm total body length) for water velocities more than 0.1 m.s-1. In contrast, however, medium- to large-sized eels (body length more than 300 mm) do not appear to show any preference of water velocities. These larger eels prefer deeper areas of water bodies, while smaller eels prefer shallower water. However, there are many exceptions to this pattern.

When you consider the presence of structural habitat features, however, it appears that there might be more of a pattern to eel distribution, at least in freshwaters. Aquatic plants, submerged root systems, woody debris, pier supports, undercut banks and channel substrates all provide physical structures that eels could use as refuges or ambush points. However, the finer details of these structures are also important.

Elvers and very small eels have been reported as using fine substrate (e.g. silt) to burrow into. During recent surveys with RSK, I found many small eels hiding in silty, marginal areas of rivers but also among or close to other structures such as submerged root systems, woody debris, and cobbles and boulders. Evidence in the literature suggests that as eels become larger, they tend to show a preference for areas among larger cobbles and boulders with refuges big enough for the eel but not much else.

Aquatic plants can provide good habitat for many aquatic animals including many species of fish. Eels are no exception; however, there again appears to be a split between small and large eels. Smaller eels are quite adept at manoeuvring their way through dense roots systems and plants where the spaces between structures are quite small. Larger eels struggle to do this and, while they may be found along the edges of dense macrophytes, they may not be able to penetrate further. Consequently, smaller eels can be found in abundance among macrophytes whereas larger eels are not.

Evidence from the literature and recent surveys I have been involved with suggest that physical structures in water bodies that provide appropriately sized refuges for eels, are an important habitat component. Where such structures are lacking, eels will be more susceptible to predation. Evidence also suggests that structural heterogeneity within water bodies influences the abundance of macroinvertebrates (Walker et al., 2013), which are an important component of many eels’ diets. 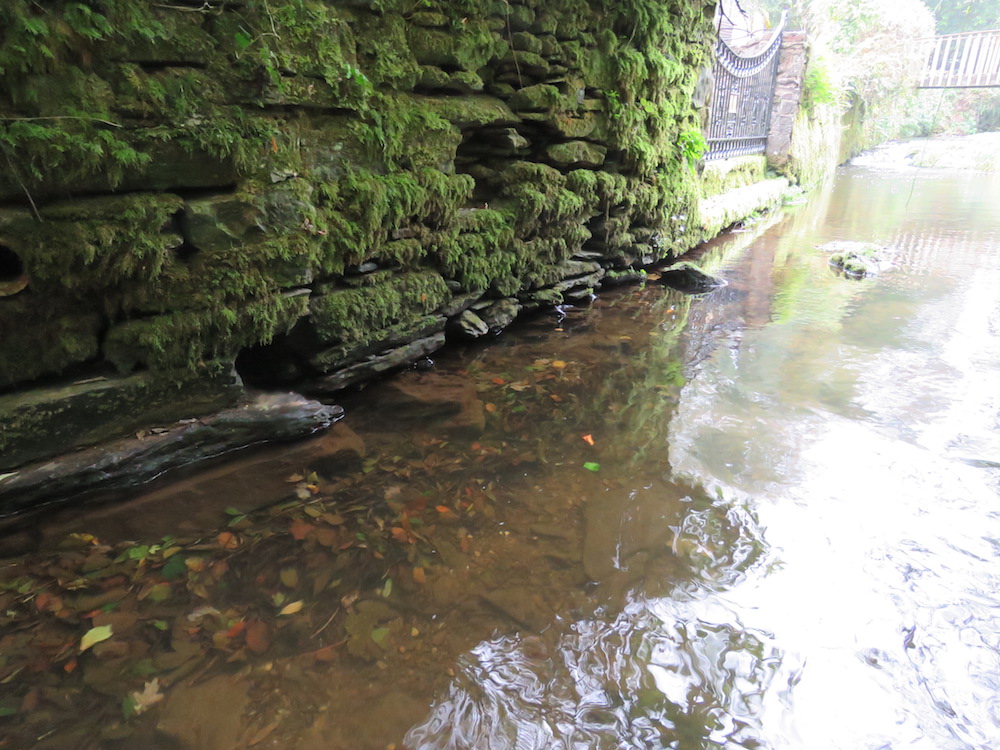 What does this mean?
Research is ongoing but evidence to date suggests that featureless water bodies with little refuge for eels are poor quality habitat for this species and have relatively low population densities. In water bodies where we continue to dredge and remove marginal vegetation or where we remove boulders and woody debris, often in misguided attempts to reduce flood risk, we are reducing the value of these habitats for eels, and almost certainly for many other aquatic species.

In addition to opening up our waterways to eels, we need to ensure that the habitat we are giving them access to is able to support them by providing refuges and foraging areas. This is likely to require changes to management regimes and, in some cases, undertaking habitat improvements. Simple measures such as providing boulder piles or large woody debris may go a long way to helping local eel populations. Other, more expensive, options include creating backwater refuges or wetland/pond systems connected to rivers.

The Wild Trout Trust believes that the presence of trout in a watercourse indicates the river ecosystem is in a relatively good state. This is because the habitat requirements of trout match those of many other aquatic organisms found in unaffected rivers and streams. While eels are more adaptable than trout and perhaps better able to tolerate less pristine conditions, they nevertheless prefer a structurally diverse, prey-rich environment that indicates a healthy river ecosystem. Perhaps when river managers consider habitat improvements, they should also consider the requirements of eels. This would benefit multiple aquatic species and species that predate on eels such as bitterns and otters. 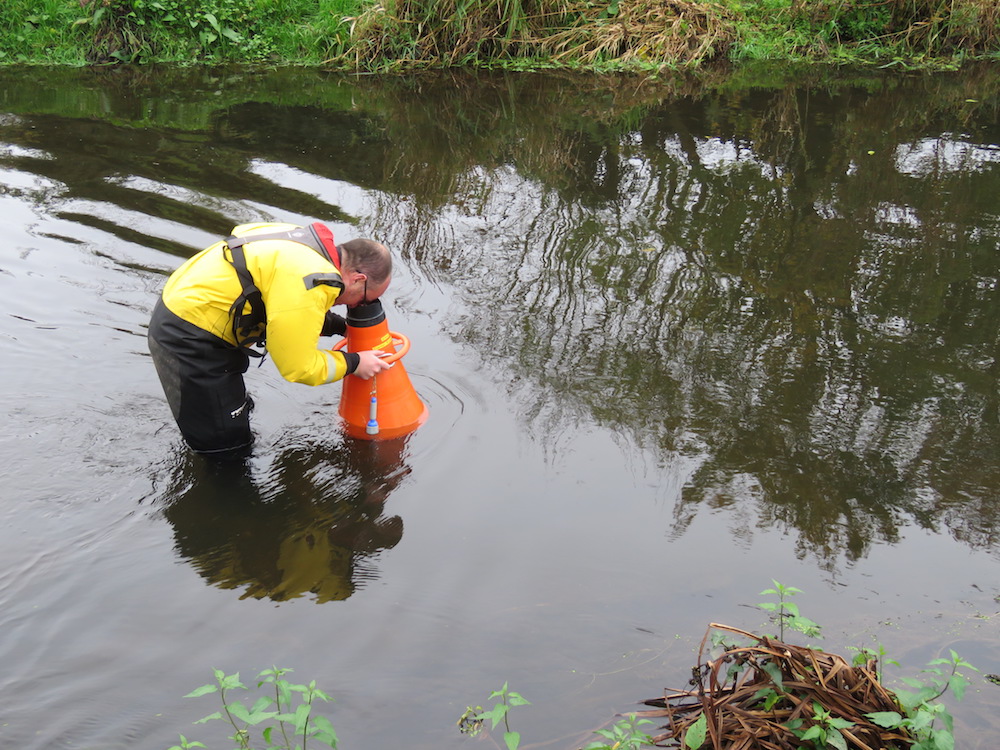 About the Author: Dr Peter Walker is a principal aquatic consultant for the ecology consultancy team at RSK, a multidisciplinary environmental consultancy. Peter leads all RSK’s aquatic ecology projects, including those involving eels, and assists with terrestrial ecology projects. He can be contacted via email at pwalker@rsk.co.uk.