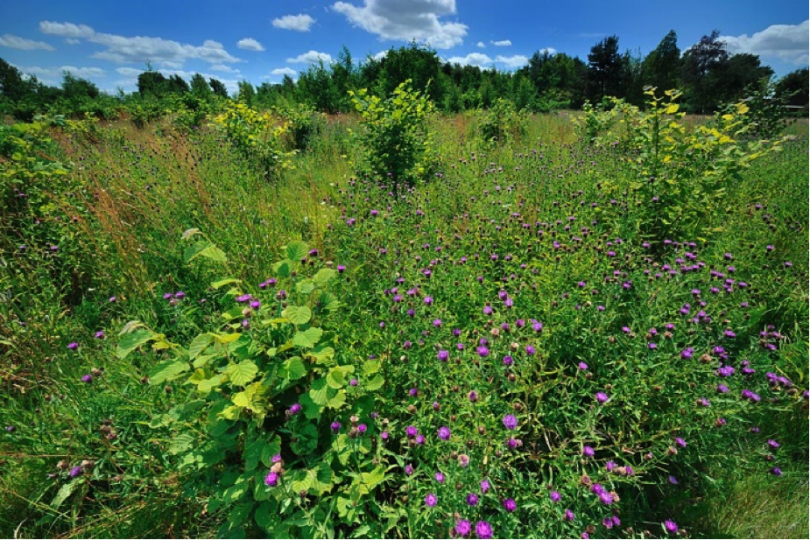 It might be somewhat of an understatement to say that the last few decades have not been good for wildlife. The evidence for a catastrophic decline in biodiversity, both in the UK and worldwide, is overwhelming. Just recently a study emerged from Germany stating that the population of flying insects has dropped by three quarters over the past 25 years (Hallmann et al. 2017); and that we are heading for ‘ecological Armageddon’ (Mason 2015). It seems as if the evidence base stating similar news has been growing at the same rate as biodiversity is declining. On the up though, at least we are acknowledging this, and moreover, researchers and ecologists are recording, documenting, and publishing this e.g. Goulson, Lye & Darvill 2008; Nilsson, Franzén & Jönsson 2008; The State of Nature report 2016. But what are we doing about this? I suppose that is a ‘big’ question, both politically and in the wider context of ecology. There are many excellent projects and examples from around the country where the fight against decline has begun; all is not lost. This is ours… 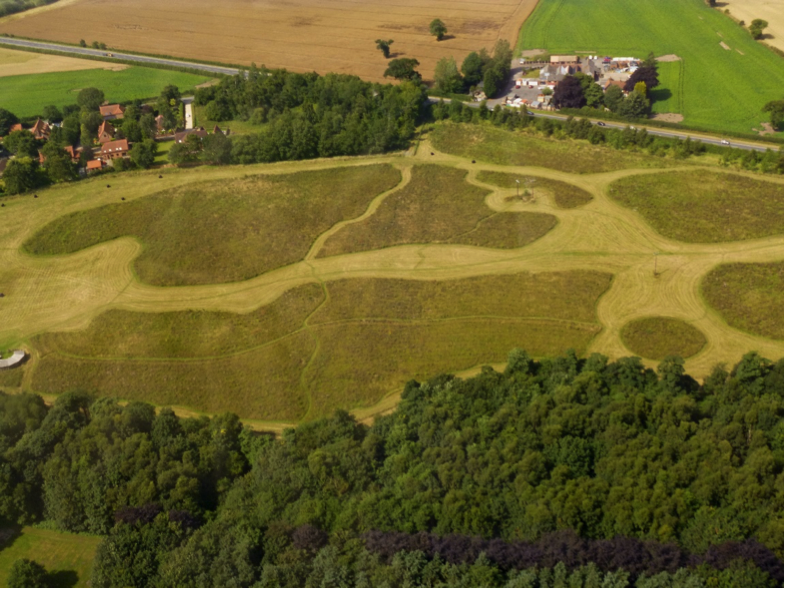 The wood-meadow project at Three Hagges Wood-Meadow originated in 2012 alongside a Woodland Trust campaign to celebrate the Queens Diamond Jubilee Year, by planting six million trees across Britain. An opportunity arose in June 2012 when Charlie Forbes Adam of Escrick Park Estate (which is situated within North Yorkshire) offered a long-term lease at a peppercorn rent on a 10ha ex-arable field, to his wife and Project Director of the Hagge Woods Trust, Rosalind Forbes Adam. Along with Ros, much of the design and practical establishment of the project was down to biologist and horticulturalist, Linden Hawthorne. In the early stages, they discovered that creating a diverse woodland would be more complicated than simply ‘planting trees’, if declines in biodiversity were to be reversed. Ground flora and open areas would be instrumental in giving rise to maximum species diversity – creating a woodland, in addition to areas of lowland meadow characteristic of the Ouse-Derwent floodplain on an ex-arable site, was not straightforward. To achieve a balance between open space for wildflowers and woodland areas, 60% of the 10ha site was planted with native trees and shrubs, and 40% left open for meadow.

The Hagge Woods Trust was formed in 2013 and aimed to redress the recent declines in biodiversity, by formulating a method for new woodland creation in response to some of the issues highlighted by the State of Nature report 2013. The report highlighted declines in areas of managed coppice woodland of 90% from 1900 to 1970 and a decline in lowland meadows in England and Wales of 97% in 50 years. After seeking advice from local woodland ecologist, Professor George Peterken, he commented that they appeared to be creating ‘a wood-meadow’ (Hawthorne 2015a). 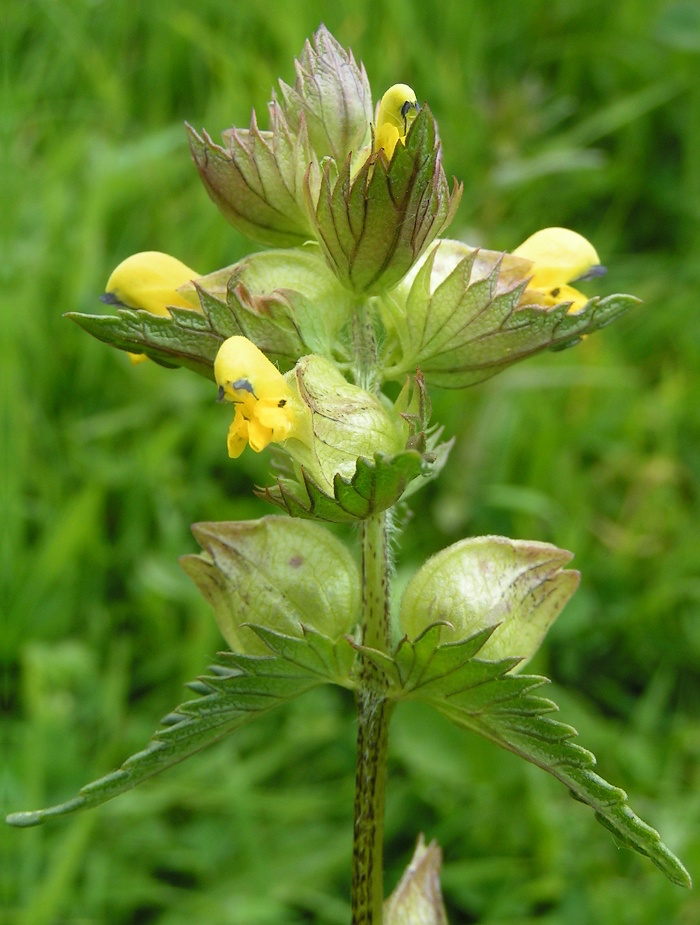 However, as the area had recently comprised an arable barley field, the challenge of nutrient enriched soil presented itself. Soil nutrient tests revealed that soil available P levels were much higher than the optimum to host a diverse meadow community, although in spite of this and to avoid delaying the project, the stale seedbed technique was employed to prepare the ground as recommended by Natural England (Natural England Technical Information Note TIN067, 2010). By May 2013, two types of meadow mix seed had been sown; MG5 in the drier area, and MG4 in the wetter area. Mowing regularly along with appropriate management, would in time, aim to reduce the enriched soil to support a diverse plant community rich in wildflowers and avoiding dominance of coarse grasses. With the help of volunteers and with a grant from the Forestry Commission, by December 2013, 10,000 trees had been planted including 24 species of native tree and 7 shrub species. Trees were planted in lazy-s in rows in nine copses with a view to cutting paths through the meadow and surrounding each copse (Hawthorne 2015b).

Wood-meadows are traditionally managed ecosystems, once widespread and abundant in parts of Scandinavia, Estonia and the Baltic States.  They are incredibly species rich; over 60 species per m2 (Kull & Zobel 1991). Generally, they have not been recognised in Britain, due to our milder winters and our sharply defined modern landscape, partitioning the countryside into woodland and fields. Despite this, there are areas in the UK where wood-meadow vegetation can be recognised; such as forest fringe landscapes in Dartmoor and the Lower Wye Valley, East Monmouthshire and the Forest of Dean, Monks Wood NNR, Cambridgeshire and in Swanton Novers Great Wood, Norfolk (Peterken 2017). Potentially areas of wood-meadow can offer an opportunity to maximise biodiversity, with the transitional margins between meadow grassland, woodland flora and trees creating a niche for more species (Smith et al. 2001). This being the theory behind the wood-meadow creation at Three Hagges Wood-Meadow.

So, what since then? We believe that the key to a successful creation project lies within the management and monitoring at Three Hagges Wood-Meadow. Meadow areas have been cut twice annually since sowing in 2013. The first cut is around midsummer, or as close to 1st July as possible, and the second in September. This removes the maximum amount of nutrients from ‘the system’ to allow for a plant community rich in wildflowers to establish (Tallowin & Jefferson 1999). This year we had our first flock of grazing Hebridean sheep on a section of the meadow, as part of the management regime, to encourage bare patches of soil for the establishment of annual plants such as yellow rattle, which reduce the dominance of grasses (Pywell et al. 2007). With this in mind, we have sown more yellow rattle seed directly into the meadow. 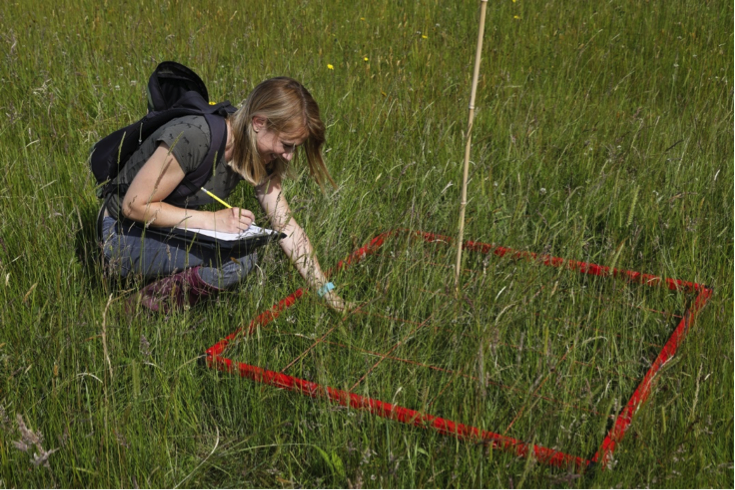 A monitoring program at the site has developed, along with growing interest in the project. In view of becoming an example of a community wood-meadow project, and to offer a methodology to other organisations and land managers, we want to gather an evidence base of our progress in terms of biodiversity. Is a wood-meadow ecosystem more species rich than woodland or grassland alone? Which invertebrates are encouraged by such an ecosystem? Is our management regime working? To answer these questions, we are surveying the meadow plant community and transition zones between the copses and open meadow on an annual basis. Monitoring of the meadow plant community commenced this year; 25 fixed m2 quadrats were placed in the areas of open meadow and the presence of all plant species recorded. We also have local invertebrate, small mammal, bird, reptile and amphibian experts identifying and recording data on a yearly basis. Data is currently being formatted with a view to submitting to the national biodiversity network (NBN) to enable data sharing. Furthermore, we are a ‘study-site’ for The University of York and have a team of students under Dr Kelly Redeker examining land-use and soil properties.

The wood-meadow is also used for local school visits as part of our educational programme and we are hugely dependent on our volunteers for much of the wood-meadow maintenance, management and enhancement during fortnightly volunteer sessions. So, what are the fruits of our labour? 765 species of invertebrate were recorded here by the end of 2016; these records have now been submitted to the NBN and will be available to view in due course HERE. In terms of the meadow plant community, up to 17 plant species were recorded in some of our 1m2 quadrats; this is comparable to local nature reserves, and not bad for a five year old ex-arable site. But we are far from finished; next year we intend to start surveying what will become the transition zones from the copses to the meadow areas. We are excited to see any impact on the plant community from areas of grazing and yellow rattle enhancement. And finally, extending beyond our own work in Three Hagges Wood-Meadow, we plan to explore the possibility of forming a corridor to link the River Ouse and Derwent. This hopes to initiate a ‘better connected’ landscape by promoting the flow of organisms and ecological processes between patches of land, and with a view to enhancing and increasing biodiversity (Heller & Zavaleta 2009; Lawton et al. 2010; Krosby et al. 2010).

We have achieved a great deal, but there is much to be done; our wood-meadow project is a long-term and ambitious one, but is supported and driven by a fantastic network of trustees, friends and volunteers all working together to improve our environment for the next generation. Watch this space….

About the Author: Katherine Wotherspoon is volunteer and research coordinator for The Hagge Woods Trust, facilitating volunteer sessions and responsible for the monitoring programme at Three Hagges Wood-Meadow. She also works part-time for the Open University as a project officer for The Floodplain Meadows Partnership, where she completed her PhD in Floodplain Meadow Ecology two years ago. Email volunteer@haggewoodstrust.org.uk for more information on the project.